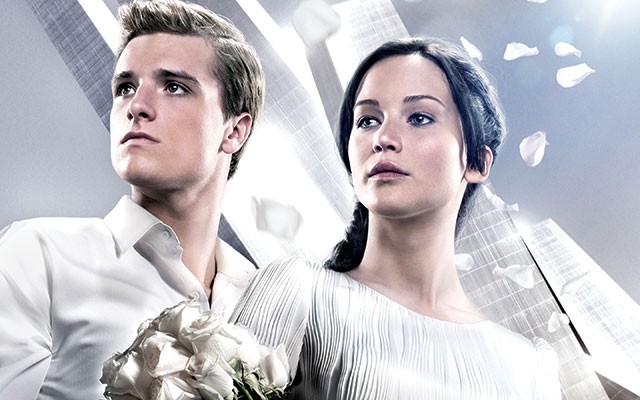 Well, we can presume he did. We can easily imagine that he woke up from nightmares drenched in sweat. We just never saw it onscreen. Depicting that sort of thing used to be the domain of angsty fan fiction. Nowadays, Tony Stark, in 3D IMAX, can’t sleep after New York. Similarly, we get our reintroduction to Katniss Everdeen, co-winner of the 74th Hunger Games, via a tremendously horrific flashback she experiences in what was once her safe place—her secret hunting grounds in the woodsy fringes of District 12.

Her life as she knew it is over. Catching Fire covers Katniss’ “victory tour” and new life as a tool in an endless propaganda parade shoring up the spoiled, despotic Capitol that bleeds its impoverished districts dry of all resources, demanding even the lives of their children in the annual bloodsport battle-to-the-death called the Hunger Games.

Katniss (the glorious Jennifer Lawrence) isn’t anything like a classic hero—and I don’t mean because of her gender. She is not a rebel. She is not an idealist. She’s not Luke Skywalker. She has never dreamed of overthrowing the Capitol, and she isn’t starting now. She is pure pragmatism in a tough world with few options at her disposal, and she is doing what she must to save her own skin and protect those she loves. She is blatant about this: “I did what I had to do to survive.”

This is not a thing that heroes say. Sometimes it’s clear that’s what they’re about, just regular guys—almost always guys—thrown into a bad situation they wouldn’t have chosen for themselves. But I can’t recall one of them ever actively pushing away the role thrust upon them... nor a story itself seeming to work toward the apparent diminution of its protagonist. I might even find myself fighting suspicions that this was a function of the, er, non-Hollywood-traditional gender of said protagonist, except that Katniss is probably the most plausible hero—yes, she’s definitely still a hero—that could come out of her oppressive world.

She’s also a marvelous cutdown of the preposterousness that too often passes for heroism in Hollywood, and a stinging jab at the limited autonomy Hollywood most often grants female characters.

See, Fire takes place over the year after Katniss and Peeta Mellark (Josh Hutcherson) won the Games for District 12. The unprecedented dual winners are the result of Katniss’ canny ploy of pretending to be madly in love with Peeta, which endeared them to the Capitol audience watching on television, and then, when they were the last two standing, convincing Peeta that they should both eat poison berries and die together rather than one having to kill the other and be separated forever. So romantic! The Capitol audience ate it up, and the Gamesmakers figured they’d better let both live and win, lest they have a riot on their hands. Not a real riot, of course—the people of the Capitol are too well-fed and docile for that—but a PR disaster, at least.

Now, Katniss must keep up that pretense of passion for Peeta, to prevent people from figuring out her gesture was one of rebellion, not love. President Snow himself (a scarily smarmy Donald Sutherland) threatens Katniss in this regard: she must keep up the “love-crazed, besotted schoolgirl routine.” Or else.

But it’s too late. Whatever she intended, those watching in the districts saw defiance: Katniss changed the rules, and that’s not supposed to be possible. They’ve caught a glimmer of hope, and now actual riots are in the offing.

Katniss is awesome as a character, and remarkable as a hero, because her battle is with herself. She wants to protect her family, but also the boy she’s really in love with, Gale (Liam Hemsworth), and Haymitch (Woody Harrelson), the other surviving Games winner from District 12 who continues to mentor Katniss and Peeta, but she cannot help but be the girl for whom disregarding the rules is as normal as breathing.

Katniss is special, and so is the story around her. It’s a devastating indictment of pop culture as propaganda—about its power and the limits of its powers—within its own context, as with the disgusting spectacle that is TV host Caesar Flickerman (Stanley Tucci) and his supernaturally white teeth and unctuous manner. It’s a strike at the willful ignorance of the well-off in the face of poverty and desperation all around them. How do the people of the Capitol cope with their lives of comfort and luxury next to the deaths of children? At an obscenely lavish Capitol party in Katniss and Peeta’s honor, new Gamesmaker Plutarch Heavensbee (Philip Seymour Hoffman) tells her, “If you abandon your moral judgment, it can be fun.”

I can’t exactly say that Catching Fire is “fun,” then, but with its excellent sociological sci-fi speculation and solid adventure, it’s an enormously rewarding and provocative drama in the guise of popcorn entertainment.