'The Theory of Everything' Explores Love, Time and Space 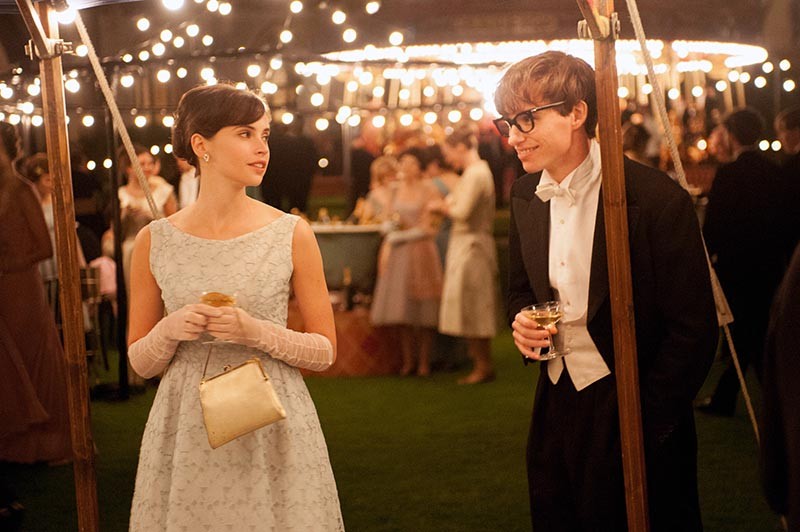 After pointing out all the scientific inaccuracies last year in the space drama Gravity, famed astrophysicist Neil deGrasse Tyson (Cosmos: A Spacetime Odyssey) recently applauded filmmaker Christopher Nolan's new sci-fi adventure Interstellar for its depiction of some of the mind-bending elements of the universe, including wormholes, gravitational fields and time dilations. One might wonder how deGrasse Tyson would react to a feature film on the life of arguably the greatest scientific mind living today having little science at all.

In The Theory of Everything, esteemed British cosmologist Stephen Hawking might mention singularity theorems and thermodynamics to impress his colleagues, but it all comes secondary to matters of the heart. In doing so, the film explores a touching relationship based on love and mutual respect and the idea that whatever genius concepts floating around inside Hawking's head at the time were far too important to allow a strained marriage (or a neurodegenerative disease, for that matter) to get in the way.

Adapted from Hawking's first wife Jane's 2008 memoir Travelling to Infinity: My Life with Stephen, The Theory of Everything vaguely explains just how influential Hawking's discoveries were to those attempting to understand the "underlying order of the world," but this isn't the kind of film made for science geeks hoping to get an inside look at Hawking's process or how his bestseller A Brief History of Time affected others' research on theoretical physics. Instead, Oscar-winning documentarian James Marsh (Man on Wire) and screenwriter Anthony McCarten (Death of a Superhero) scale the narrative back to a much simpler equation and focus on the courtship and a large portion of Stephen and Jane's life together. The fragile "love overcomes all" theme probably wouldn't be something Hawking himself would deem logical since there is no mathematical equation to explain the complexities of the human heart, but the extraordinary performances given by actors Eddie Redmayne and Felicity Jones—as Stephen and Jane—make for a solid argument.

It's especially true for Redmayne, who lends himself entirely to capturing every uncomfortable nuance of Hawking's being once his disease has taken over his body. From a physical standpoint alone, liken what Redmayne does to Daniel Day-Lewis in My Left Foot or Mathieu Amalric in The Diving Bell and the Butterfly. Churning out an all-too-familiar biopic script, McCarten should have followed in his subject's footsteps and broken boundaries. The screenplay's shortcomings, however, do not take away from Redmayne's finely-tuned characterization or Jones' epitomizing devotion. Even if it doesn't add up to much in the grand scheme of things, there's still definite value in what they project on screen.