The World’s Most Dangerous Biopic: The Problems And Promise Of ‘Straight Outta Compton’ 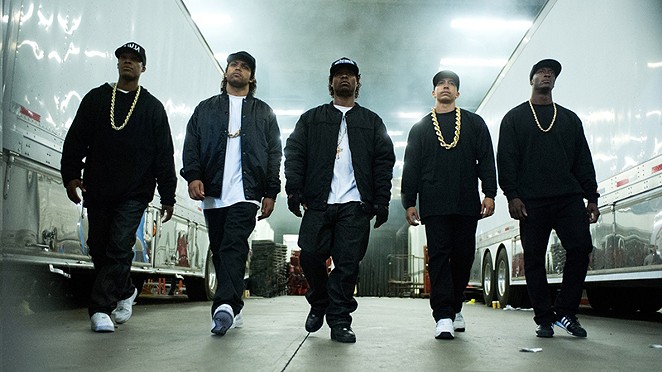 In June, MC Ren, one of the least visible of Niggaz Wit Attitudes, tweeted his dissatisfaction over the upcoming N.W.A biopic — “Man fuck these bitches at universal pictures leaving me out the movie trailers tryin to rewrite history.”

In less than 140 characters, Ren summed up the potential dangers of Straight Outta Compton. Ren’s cohorts Ice Cube and Dr. Dre — the remaining oligarchs of N.W.A — produced the movie, helping to determine how the story of their teen and twenty-something years will be told.

That is a recipe for some serious retroactive myth-making. The danger here is that Straight Outta Compton might confuse N.W.A lyrics for a transcript of the rappers’ lives — the same way people may confuse images from the Selena movie with events from her real life.

A heavy-handed N.W.A fiction would be a shame, given the cultural importance and gripping thrills of The World’s Most Dangerous Group. In 1988, Dre, Cube, Eazy-E, Ren and DJ Yella released the album Straight Outta Compton. Even on the cover, staring at a body, or mic, dropped on the ground, N.W.A knew they rewrote the rulebook of hip-hop.

Previously dominated by New York, N.W.A scored one of the first rap mega-hits outside of the five boroughs. Geography has always been vital to hip-hop — it’s not just the sneakers that are important but which streets those Adidas step on. Breaking out of the NYC grid, N.W.A opened up future employment opportunities in cities like Atlanta, Houston and Memphis.

Rappers have witnessed the trials of the ghetto since The Last Poets and Gil Scott-Heron, but it was N.W.A that first reveled in the decay. Gangsta rap, set in motion by Ice T and Philadelphia’s Schoolly D, became a household genre under the authority of N.W.A. Proud of South Central culture, the quintet lent the rest of America a new vocabulary — jacking, static, the eight, the benzo and the sweet chariot, the six-four.

As the drug war revved up, Nancy Reagan even hopped in a tank on the streets of LA for a PR stunt to break down a crack house — a bust that brought in a single gram of rock cocaine. If there’s reason to question the individual posturing of N.W.A in Straight Outta Compton, do not doubt the violence of police in the community.

In 1992, after N.W.A had already split due to contract disputes, the prophecies of “Straight Outta Compton” and “Fuck the Police” became true. On April 29, after four police officers were acquitted of fracturing Rodney King’s skull in 11 places, Los Angeles broke into a riot. Over six days, 53 people were killed, over 11,000 were arrested and damages exceeded $1 billion. (With a Bush and a Clinton running for the country’s top office and national outrage over videos of police brutalizing black bodies, sometimes it’s hard to tell what year it is in America.)

Since day one, N.W.A has thrived on controversy, using media hype or blasting cops as a way to move records. In the run-up to Straight Outta Compton, it’s been the same old song and dance.

On January 29, Death Row Records’ Suge Knight, who threatened Eazy-E into releasing Dr. Dre from his contract, did a fatal hit-and-run after leaving the film set. Connected by some underworld of bad dudes, Knight expected boxer/domestic abuser Floyd Mayweather to bail him out by forking over $10 million. Mayweather did not oblige.

In July 2014, Sande Allesi Casting posted a notice calling for female extras with a repulsive grading system of attraction. At the top, the company called for “A” girls — the “hottest of the hottest,” regardless of race. These women were presumably cast in actual roles like “topless female” and “ménage girl #2.”

A level down were the “B” girls: “Light-skinned” women with “small waists, nice hips” were encouraged to apply. “Beyoncé is a prototype here,” read the notice.

Time out. If Beyoncé is on the B-level, what sort of “light-skinned” Helen of Southern California were they looking for to launch 1,000 pubescent erections? If there’s a level of physical perfection above the Queen Bey, may the lord have mercy on our self-images.

At the bottom of the casting call were the “D” girls — “African American girls.” “Poor, not in good shape. Medium to dark skin tone.”

It doesn’t take a Ph.D. on race relations to suss out the sexual and racial politics at play. The skin tone of the pool girls doesn’t matter, for their currency is in the shape of their bodies, not their racial identity. But the heavy “medium to dark” girls are there to signify a total lack of currency, typecast into South Central poverty. Surprising no one, Sande Allesi retracted the casting call.

Unfortunately, as attuned to race problems as N.W.A was, there are all too many bars to reflect the misogyny of Straight Outta Compton’s casting call. Let’s go with one from the tune from which the film takes its name.

“What about the bitch who got shot? Fuck her. / You think I give a damn about a bitch? I ain’t a sucker” — Eazy-E.