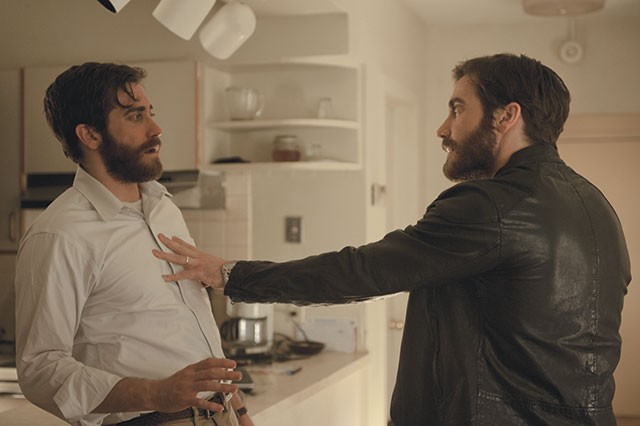 There are movies about doppelgangers, and there are movies in which doppelgangers appear. And then there is Enemy, based on José Saramago’s 2002 novel The Double, which is unlike any other doppelganger movie. It doesn’t really operate under any discernible set of rules; in fact, it doesn’t seem to aspire to mundane concepts such as rules. It’s content to provide a consistent sense of dread that is ratcheted up slowly and surely until the movie’s final scene, which is shocking. It would help if that final scene made sense, but you can’t have everything.

Jake Gyllenhaal (working with his Prisoners director Denis Villeneuve) is Adam, a mild-mannered and mildly depressed history professor at a Toronto university. He has a beautiful girlfriend (Mélanie Laurent) in whom he doesn’t seem to have much interest. He doesn’t really have friends and his apartment is a total downer.

One night, on the possibly malicious recommendation of a colleague, Adam rents and watches a DVD. At one point he thinks he sees himself in the movie, and then he starts watching the actor’s other flicks. Gyllenhaal also plays the bit-part actor, Anthony Clair.

The plot, aside from the whole there-are-two-guys-in-the-same-city-who-look-exactly-alike thing, revolves around an underground sex club, existential notions of the self, spiders and swapping significant others. But mostly it’s a showcase for Gyllenhaal to act creepy and creeped out, and it really works.

For example, Adam and Anthony are so alike physically that when Adam calls Anthony’s home and gets Helen (Sarah Gadon), Anthony’s wife, she thinks it’s her husband’s voice on the line. Then Adam becomes terrified that he and Anthony could so sound similar as to be mistaken for each other over the phone.

Gyllenhaal plays the two different characters with two different sets of mannerisms, but the performance is subtle enough to draw comparisons to Jeremy Irons’ turns in Dead Ringers.

Regarding the plot itself, Enemy has, depending on your point of view, problems. If you’re interested in a story that comes full circle or has resolution, avoid it. If you’re looking for something that has deliberate pacing and a mounting sense of unease, put it on your watch list.

As dark movies must, much of Enemy unspools at night, but even the daytime scenes are eerie. There’s an ominous yellow hue that’s both antiseptic and dingy, as if Villeneuve and director of photography Nicolas Bolduc shot the scenes on a set that had the cleanliness of a pristine operating room but in post-production added the thinnest layer of grime.

There’s never an answer to the question of whether Adam and Anthony are the same person, or whether one of them is good and the other bad. But the movie is good, even if it demands a second viewing to figure out what’s going on.