This must be what it feels like for New Yorkers and Angelenos to watch TV.

Amazon Studios’ new animated series Undone, which will premiere on Amazon Prime Video on Friday, September 13, immediately foregrounds its San Antonio setting. The first episode opens with a vividly painted image of downtown — the Tower of the Americas poking through our relatively understated skyline, with Highway 281 and the Alamodome visible on the left.

From highway interchanges to popular tourist haunts, it’s such a treat to see San Anto depicted accurately onscreen that it’s hard to resist googling even the most basic locations to check whether they have real life counterparts. Even the characters’ homes look the part — architectural details from bathroom tile to hardwood floors carry the familiarity of all the done-up early-20th century houses for rent in neighborhoods north of downtown. And, yes, the River Walk and Alamo both make appearances, as well as less-famous landmarks like Fiesta Texas and the Witte Museum. 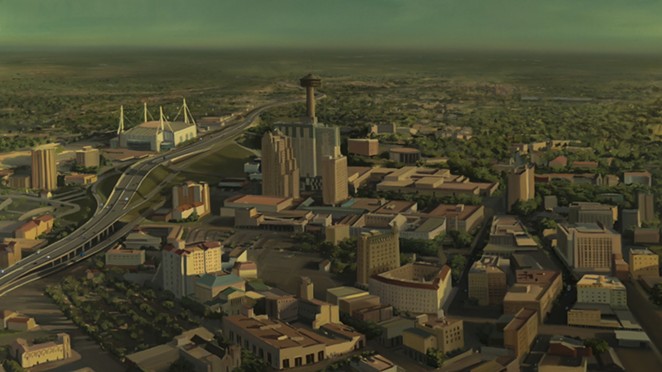 While it’s refreshing to see our city rendered so faithfully, Undone is much more than its setting. The show centers on Alma (Rosa Salazar), who feels trapped in a quotidian life measured out by a montage of repetitive rituals — waking up next to her boyfriend, getting ready in the bathroom, eating breakfast, driving to work.

“I’m so bored of living,” she tells her sister.

After a nearly fatal car wreck, Alma starts having visions of her dead father, Jacob (Bob Odenkirk). A Virgil to Alma’s Dante, he guides her into a new, more fluid understanding of time and reality as Alma’s experiences and memories twist, loop and fall to pieces.

While Alma becomes unmoored from daily life, the show is kept anchored by Salazar and her co-stars’ performances. Each relationship onscreen has a palpable chemistry. Tipsy pillow talk between Alma and her affable boyfriend Sam, played by Siddarth Dhananjay, carries with it the comfort of a years-long connection, and a lifetime of growing frustration between Alma, her mother (Constance Marie) and her sister Becca (Angelique Cabral) crackles beneath the surface of every conversation.

Salazar imbues Alma with a deep pathos, both before and after her world begins to disintegrate. As Jacob, Odenkirk is often positioned as a didactic guide, but he pushes Alma to develop her newfound abilities with a barely concealed urgency.

The actors are aided by the true-to-life feel of the show’s dialogue, which follows a natural ebb and flow that never veers too far either into incessant banter or heavy-handed exposition. With writing like this, it’s no surprise that Undone co-creators Purdy and Raphael Bob-Waksberg are alumni of another, often emotionally raw series: Netflix’s BoJack Horseman.

Undone is far from the first production to use rotoscope — a technique in which animators trace over film footage frame by frame — but it is the first television series to be rotoscoped in full. Known to many from Richard Linklater’s Waking Life and A Scanner Darkly, the technique allows Undone to have its cake and eat it too. The shifting nuances of the actors’ expressions and movements are preserved onscreen — albeit a bit flattened out by watercolor-esque washes of pigment — while the surrounding animation allows for fluid progression of oft-fantastical action, unmarred by the perceptible seams that would exist between live action and CGI. And, boy howdy, does Undone lean into the possibilities afforded to it by animation. Imaginative edits populate the show in moments both big and small, from brief time skips as a drunken pre-crash Alma undresses at home to the transforming and collapsing scenery that flashes between warring realities of past memories and present confrontations.

Although the score is deployed sparingly, it also bears mention. The soundtrack indelibly sets the series’ tone, creeping in most evidently during moments of high emotion and unreality — from gentle chamber orchestra accompaniment to shrieking metallic ringing — while the more mundane, present-day scenes and conversations often play out with little to no music, barring some tinny mariachi on the River Walk and vague no-name rock in the background of the characters’ favorite bar.

A show like Undone runs the risk of falling into the territory of movies like Fight Club and Shutter Island, in which the sudden revelation of a character’s mental illness is mere fodder for a plot twist. Entertaining as that may be — both of those films are mega-popular, after all — these “gotchas” often ring hollow, particularly since they rely on wildly inaccurate portrayals of mental illness. 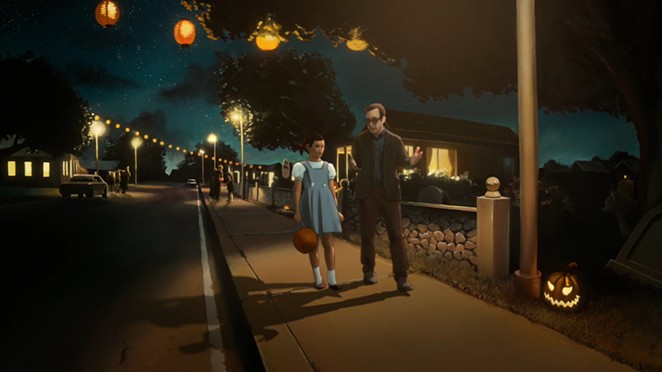 Undone sidesteps this problem by foregrounding the ambiguity. Has Alma, like Kurt Vonnegut’s Billy Pilgrim, “come unstuck in time”? Or, has the wreck triggered a psychotic break in which she fixates on her one wish: that she could go back and change the Halloween night on which her father died? As the story unfolds, the viewer can pore over a wealth of details in search of their favored outcome. But, by the end of the fifth episode — the last one provided to reviewers — there are still no easy answers.

Admittedly, Alma’s wreck-induced traumatic brain injury does provide one easy out — for the writers, that is. She loses her memory of the few days preceding the crash, conveniently setting the stage for interpersonal conflict. That said, T.B.I. can cause memory loss and damage to short-term memory, so all things told, the story doesn’t play too fast and loose with facts.

Some Alamo City details may be missing from Undone — like the ever-present balls of moss that litter sidewalks — but it’s imaginatively rendered, strongly written and cathartically performed. And, while it would be unfair to characterize the show as an ode to San Antonio, it’s nice to find our city’s melody interwoven into the larger harmonies of this inventive new series.