The first gig put on by KRTU’s indie programming since a 2010 Radiohead tribute from Chris Madden and Chuck Kerr, the Indie Overnight Radio Invasion is a welcome reprise from the Trinity station. Maddin returns in absurdist form as Loose Eel Ball, an exercise in wordplay, outlandish behavior and sonic experimentation with SA pop contortionist Marcus Rubio. Back in town from a summer recording session at the Sonic Ranch in West Texas, Mike Carrillo and his indie orchestra Deer Vibes show off the work impending on their debut LP. Power trio Crown lets loose on the muscled, blues-rock riffs of their second release of the year, Are These the Good Days? With Advance Cassette, DJ Gibb. Free, 4pm, Ruth Taylor Courtyard, Trinity University, 1 Trinity, (800) 874-6489 —Matt Stieb

Along with super shredder Marnie Stern, Boyfrndz takes math-rock to new places with meticulous precision and not a chord out of place. Echoing, poignant vocals, complex instrumentation and deep melodies make the members of Boyfrndz worthy suitors. With complex guitar craft and powerful drum work, Feuding Fathers creates Technicolor soundscapes. While throwing back to classic‘80s hardcore, Ghost Police puts their own spin on punk, combining strained vocals with a dash of contemporary hardcore. $8-$10, 8pm, The Korova, 107 E Martin, (210) 995-7229 —Shannon Sweet

The Hawks (of Holy Rosary), Buttercup, We Leave at Midnight (Friday, September 5) 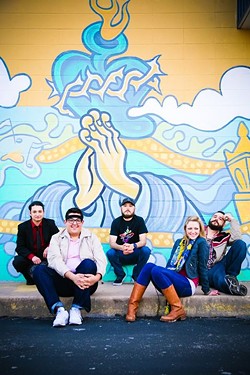 The Hawks (of Holy Rosary)

Out in July on Texas is Funny Records, the Hawks’ What Team Am I On? is packed with existential dickery and silly non sequesters sung in charismatic three-part harmonies. With a crafted sloppiness reminiscent of Pavement, the Hawks’ commitment to onstage and in-studio fun translates perfectly in their music. I imagine that the only thing more fun than writing “Fuck My Way to the Top” is the figure out and perform the harmonies on the song’s hook. After a solid hiatus performing as Demitasse, Joe Reyes and Erick Sanden team back up with bassist Odie to return as Buttercup. With an incredible ear for pop harmony and rock ‘n’ roll riffs, We Leave at Midnight delivers with titular promptness (and tightness). 8pm, 502 Bar, 502 Embassy Oaks, (210) 257-8125 —Matt Stieb

Celebrating the opening of the Tobin Center’s River Walk Plaza, Girl in a Coma’s Nina Diaz will play her new solo material in band form for the first time in SA. After performing at Brooklyn’s AfroPunk Festival, Lonely Horse returns to San Antonio to shred with some serious career momentum. An inductee into the Austin Music Hall of Fame, David Garza has been on tour with Pearl Jam, Fiona Apple, Alejandro Escovedo and Rhett Miller. Free, 7pm, Tobin Center for the Performing Arts, 115 auditorium circle, (210) 223-8624 —Matt Stieb