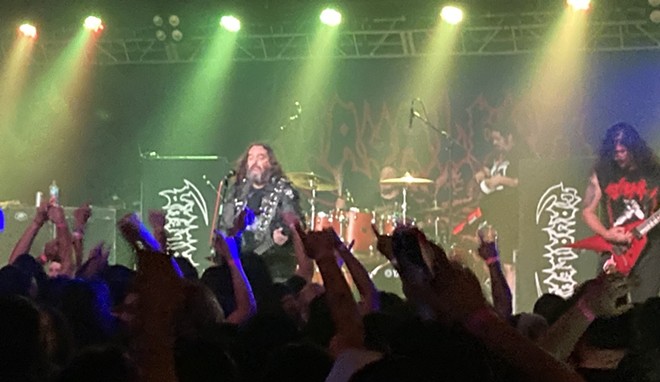 The brothers who founded seminal Brazilian band Sepultura have joined forces again for a string of dates celebrating the thrash pioneers' classic albums Beneath the Remains (1989) and Arise (1991).

Cephalic Carnage, the Denver-based opening act, brought great energy with their weed-grind-party-tech-sludge sound. They even dedicated a song to iconic Alamo City band SA Slayer and also got the crowd to chant "Weed, beer and Slayer!" Good times.

The Cavalera brothers took the stage with the acoustic guitar intro to Sepultura's "Beneath the Remains" flowing through the PA. They wasted no time jumping into their former band's high-intensity thrash. And the crowd instantly went apeshit.

Iggor Cavalera bashed the shit out of the drums with precision while Max  commanded the crowd's fury, often turning around to face his brother and jam. They performed as a four-piece, joined by members of Possessed and Soulfly, one of Max's other well-known projects.

The set list included most of the cuts from both albums over a span of 90 minutes. Divebombs and chugging breakdowns spawned mosh pits and flying beer cans. The crowd of a thousand plus chanted along to the masterfully written thrash anthems.

It was a top-notch performance from true legends of the genre — and a hell of a night for the "Heavy Metal Capital of the World."