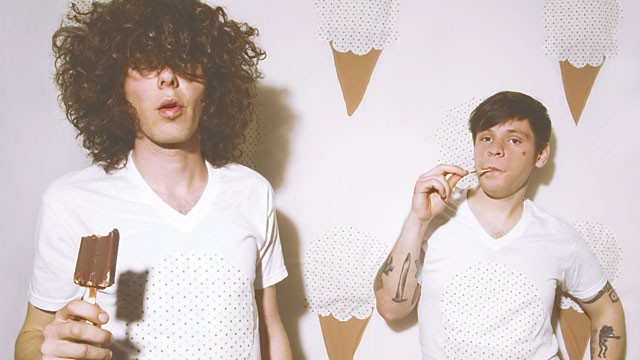 Headlining the music portion of ARTSLAM!'s 7th anniversary party this week is buzzy, scuzzy punk outfit Japanther. Founded by two art students at Pratt Institute in Brooklyn in 2001, the group is known just as much these days for their live performance art as their punch-your-face-off sound.

Fellow member Matthew Reilly mans the bass and Casio-SK-1. The SXSW-darling duo have become increasingly popular over the past few years, gaining serious notoriety after performing alongside synchronized swimmers on Brooklyn's Williamsburg Bridge
as well as out the back of a moving truck full of dinosaurs and BMXers speeding off walls in New York's SoHo. No Japanther show is predictable — but mosh pits are standard, and on more than one occasion their concerts have turned into riots.

Despite being on the scene for more than 10 years now, Japanther has managed to retain that grit from their college days, still playing house shows and touting local DIY scenes like the good punkers they are.

"We are avid zine and comic readers and hope to spend the plane ride reading some of the best and brightest ARTSLAM! has to offer," said Vanek.

The dynamic group was recruited for the bill by ARTSLAM! music director Anthony Trinidad after he encountered them in town less than a month ago at War Room.

"When they were here for the December 30 show I talked to them about possibly doing some live art pieces," Trinidad said. "I guess you will have to go to the show to find out if this is going to happen."

Vanek and Reilly have been coming to the Alamo City for years now, and played the infamous Taco Land a few times in their early days.

"Really every show there now has a big wild crowd of excited kids, and women there are particularly beautiful," says Vanek. "San Antonio is a wild town, very different vibes and scene than Austin. We love heavy metal music and wild, passionate music fans. The thrift stores in San Antonio are better and the food is unbeatable. Need I say more?"