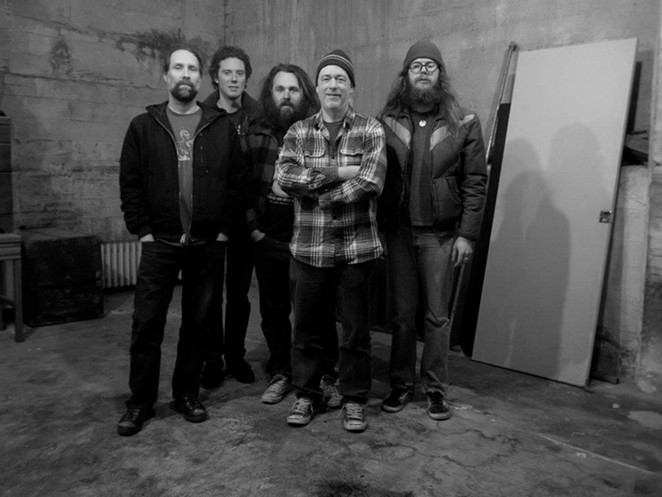 Via Facebook/Built to Spill
One of the most enduring entries into the vanguard of indie rock, Built to Spill rose to fame over two decades ago by virtue of its gnarled melodies and throbbing pop hooks, familiar sounds that once blasted out of the disintegrating stereo system in the ratchet-ass car that you drove to high school.

While the band’s lineup has cycled in and out of its studio’s revolving doors since the release of Ultimate Alternative Wavers in 1993, the core unit of Built to Spill played an essential role in the development of the relatively brief but closely documented history of the diverse clusterfuck that we refer to, simply, as “indie.”

Much like the godfathers of grunge — the perennially rad Neil Young and the alt-rock god J Mascis of Dinosaur Jr. fame — Built to Spill’s founding member Doug Martsch is a frontman and guitar hero wielding loose-sounding but intricately-woven knots of noise that went on to influence postmodern staples like Brand New, Modest Mouse and The Strokes.

Following a creative dry spell, Built to Spill’s latest album, 2015’s Untethered Moon, was its first release in six years. Not surprisingly, it upholds the band’s tradition of churning out introspective tunes not so cerebral as to alienate the stoner sensibilities of flannel-clad slackers stuck in the ’90s.

The album received critical praise for standouts like “Living Zoo,” an immaculately arranged track that revived the band’s characteristic rough edge, a self-analytic grit that seemed lacking in its more recent releases. We even see Martsch descend into a dark place new to Spill’s thematic repertoire.

As if to address his fear of burning out and fading away into the oblivion of irrelevance, he begs the listener in “Living Zoo” to stick around for the show: “Please say you’ll do anything / To make me stay.” This emotional crux is reiterated throughout the 45 minutes of Moon’s duration, most evident in deeply vulnerable songs such as “All Our Songs,” “Never Be The Same” and “C.R.E.B.” In the latter, poised like a prodigal son at his father’s doorstep, Martsch sings, “I always forget people I really love / If I haven’t seen them for a long time / And I haven’t seen you for a long time.”

In these profound and humbling moments, Built to Spill returns to its superb indie rocker roots and reminds us that, although time inevitably passes, the band is just like it’s always been.