Carlton Zeus Rocks A Cinco De May Set At 502 Bar 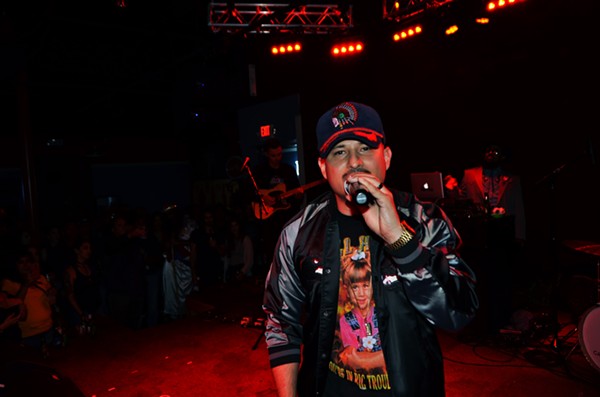 If you've been keeping on social media, you must have noticed some of the tone-deaf Cinco De Mayo parties popping up this week, like the one at Baylor University last weekend where students reportedly dressed up as maids, construction workers, or wore sombreros, ponchos, and...brown face (yikes).

While some in the audience at 502 Bar were rocking sombreros, the majority of the crowd, including myself, was pretty damn Mexican, so the vibe felt more like one of celebration rather than appropriation.

Slated to rock the Cinco De Mayo bill was local rapper Carlton Zeus, who, even when it's not May 5, often rocks a sombrero on stage. The show coincides with Zeus' just-released debut album Three Strikes You're In. Joining the SA based hip-hopper Friday night was a host of performers including Celina Jennée, Peris Young, Carne Asada, Aj Hernz and Colour Red, who sang on the majority of the Zeus' album.

Chris Conde
Aj Hernz
Aj Hernz was already mid-set when we entered the venue.  The R&B singer, who calls San Antonio home, had a killer band behind him as he moved across the stage singing vibrant melodies over the rhythm. He had a fearless stage presence and an ability to engage the crowd (clearly not his first rodeo).

Up next was Colour Red. The singer has been working with Carlton Zeus for a good while now, and last night definitely proved why. He's not just a hype man or a backup singer.  He can definitely hold his own and, well, hold it down on stage.

Chris Conde
Led by Spurs Jesus (seriously, he was there), Carlton Zeus took the stage and the crowd went nuts. Backed by an electric guitar, a DJ, a drummer and Colour Red to sing the hooks, Zeus put on a performance to remember. Though this show was definitely hip-hop, the inclusion of live instruments felt like you were at a rock and roll show — somehow all without crossing that line into cheesy rap-rock.

Zeus delivered a number of tracks off Three Strikes You're In as the audience danced along to the Brownsville-born rapper's catchy beats and sultry flow (seriously, his voice is kinda sexy). Towards the end of his set Zeus and band plunged into "Necio Cumbia" and invited a bunch of women onto the stage to dance during the breakdown.

Chris Conde
If you've never seen this performer live, his set is definitely worth checking out. After hitting the ground running when he showed up on the local beat a few years back, Carlton Zeus clearly doesn't show any signs of slowing down.