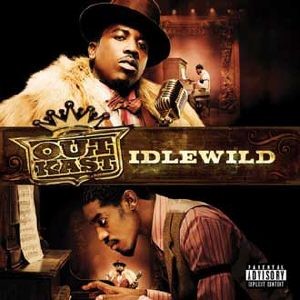 
Outkast’s Andre 3000 and Big Boi keep finding new ways to work separately under the group umbrella. After the oddball triumph of Speakerboxxx/The Love Below proved that they could co-exist without actually speaking to each other, they conceived Idlewild as a film project that could harness their ebbing sense of unity.

The movie’s conceit, that we’re watching hip-hop performers in a Prohibition-era speakeasy, colors the soundtrack album, but since Outkast’s sonic approach has always been highly eccentric, the result hardly feels like a left-field gimmick. But as with Talking Heads’ True Stories (another example of a disintegrating group holding it together for a film), the movie’s narrative demands weigh down the music at times. It doesn’t help that the group attaches pointless, self-referential interludes, including one in which Andre assumes an absurd British accent, calls himself “Larry Olivier,” and bemoans the presence of rappers on screen.

On the musical front, Andre’s “Idlewild Blue” is the most inspired example of Idlewild’s time-travel concept, linking a rustic, acoustic blues track (complete with wailing harmonica) with a pulsating hip-hop beat. Big Boi’s material has more natural exuberance and bounce, and “N2U” slinks by on the kind of rubbery funk groove that Prince learned from Sly Stone. It’s a track that would fit comfortably on any Outkast disc.

The album’s highlight, however, showcases neither Andre nor Big Boi. The threatening seduction of “Call the Law” features rising R&B phenom Janelle Monae, and she practically steals the album from its titular stars on a number that’s pure Cab Calloway-meets-Dr.-Dre. Monae’s sass and soul make you wonder what she could do with an entire album in this vein.

A common criticism of the film is that it flags during the second half `see the Current’s review, page 26`, and that’s certainly true of the album. Andre’s “Hollywood Divorce” is mopey and drab, aside from a vibrant Snoop Dogg cameo in the middle. And the set ends in puzzling fashion, with nearly nine minutes of aimless, mostly instrumental melancholia appropriately called “A Bad Note.” It’s a bummer that almost makes you forget the high points along the way.