Chasing the Dragon: Catching up with Trivium ahead of the band's Aztec Theatre performance

Saturday's show will likely draw the largest crowd the band has played for as a headliner in the Alamo City. 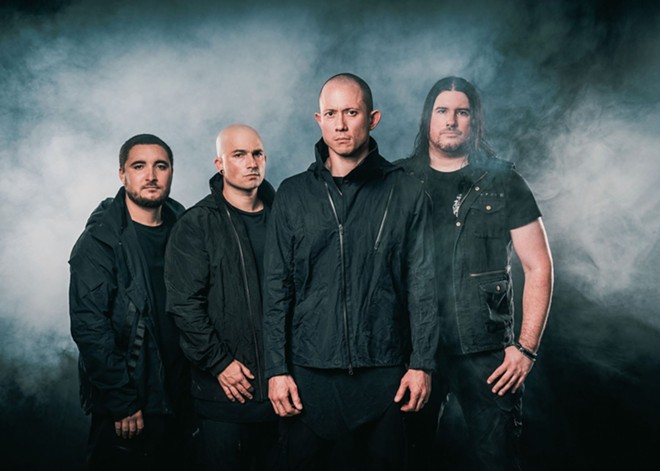 Courtesy Photo / Trivium
Critics have lauded Trivium's 10th and most recent album, In the Court of the Dragon, for its seamless distillation of those influences.

Now, on the heels of two recent-ish album releases and a stint on the road supporting Iron Maiden, the band is headed to the Aztec Theatre on Saturday, Nov. 5.

The show will likely draw the largest crowd the band has played for as a headliner in the Alamo City. Between the Buried and Me, Whitechapel and Khemmis open.

Now past its second decade, the Florida-based band continues to hone a sound that mixes the brutality of metalcore with thrash, technical death metal and prog elements.

Critics have lauded its 10th and most recent album, In the Court of the Dragon, for its seamless distillation of those influences.

We caught up with Trivium guitarist Corey Beaulieu to talk about developing a setlist for the tour, its latest album and why water seems to pop up so often in its lyrical themes.

It seems like Trivium comes through San Antonio every tour.

Yeah, we've had a lot of really good shows. Basically, all the places in Texas have been really good for us over the years. We always have a lot of fun playing there.

You guys started out playing at the White Rabbit, a larger club-sized venue, and now are playing at the considerably larger Aztec Theatre, which you haven't played before.

We haven't. I've seen pictures of the place, so I thought we did. I remember the White Rabbit. The last couple times — I can't remember the name of the venue, but I can picture the place — it was always a really, really hot show. It will be nice to hit a new spot in San Antonio we haven't played before. I'm looking forward to it. [Bassist] Paolo [Gregoletto] assured us that we had never been there. He usually remembers all that stuff.

This tour is in support of Trivium's two most recent albums, What the Dead Men Say and In the Court of the Dragon. With two albums to represent at once, was it difficult choosing songs for the setlist?

Since What the Dead Men Say came out right when everything was peak lockdown, or right at the beginning of it, we never got to tour really for it, up until recently. We had no idea how long that was gonna last and when we were gonna be able to tour again. So, we figured if we're shut down for a while, once we went back out on tour, it would be nice to have something new to promote instead of going out to tour a couple-year-old record. We used the time off to be productive and put out a new record. We're doing the double-release promo thing and tying everything together. With the headlining tour, we have more time, so that helps picking out songs. We have so much of our catalog learned and ready to play that we kind of picked a handful of songs. Every night, we're rotating and playing different songs. One night we'll play an extra song from What the Dead Men Say and another night we might play an extra song from In the Court of the Dragon.

What's the song you'd want to be remembered for?

Oh, geez, that's hard to pick. There's 10 albums worth of songs — it's hard to pick one. It's also fun because we're so collaborative as a band that if someone brings in a demo idea, everyone else puts their stamp or DNA on the song. Even if you bring in the initial idea, it becomes everyone's song.

In the Court of the Dragon feels massive and epic. It feels like it might resonate right now because of the new Game of Thrones spinoff show House of the Dragon.

I know of the show, but I have never seen it. I know what you're talking about though. There were a few people when we were doing press for the album that said the same thing — it had a Game of Thrones vibe. Now the House of the Dragon, they just need to put one of our songs in the show and we can have a Stranger Things moment. It just kind of turned out that way when we were writing and that's what I was hoping to do at one point. We had Ihsahn from Emperor do the orchestration within the songs to give them texture and atmosphere. It was cool to finally have that. He did a really good job.

You have a lot of water-related songs. Is there a reason behind that, or is it just coincidence?

I guess it's just a good metaphor to describe stuff. Maybe because being from Florida it's just on your mind. You know, hurricanes, storms and we have a lot of songs that have to do with storms and drowning. That was never done on purpose, it just kind of happened. We always joked about it, because sometimes we'd play outdoor festivals and during our set it would rain and then, after, it would be sunny again. That's what we get for having so many songs about water, we're the only band that gets rained on during a festival.

If you could choose one album to listen to for the rest of your life, what would it be?

It would probably be Iron Maiden's Somewhere in Time or Megadeth's Rust in Peace. It depends on the mood. Especially since we were just on tour with Maiden, I'm on an Iron Maiden kick.