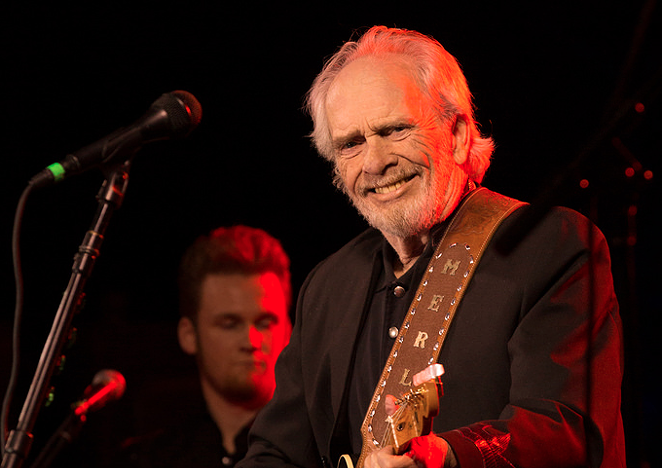 Jeffrey Burton
Merle Haggard at Whitewater Amphitheater
We were late, stuck on 306 behind everybody else heading out to WhiteWater to see Willie Nelson and Merle Haggard in the first of a 3-night sold out event. I was anxious as hell to get there, but a nip of Buffalo Trace, given to me by my sister-in-law, and a couple tokes, given to us all from the Great Spirit, and I was getting into a Willie mindset. That is to say, “fuck it, shit happens. If I don’t get there in time, I’ll make it up.”

I felt like a badass picking up my ticket at Will Call with the other VIPs, then told myself not to. Most of them were older, white folks who can spend what amounts to a small fortune on tickets to get right up close to these craggy-faced beacons of a bygone era. Me, my old man, and a buddy of mine got our drinks and made our way to the middle of the crowd.

The Strangers kicked into Merle’s theme and slowly, out walks Mr. Haggard, stopping to wave and shake hands with folks in the first row. With two quick draws of his bow, fiddle player Scott Joss sends The Strangers into “Big City.” Merle sounds older and rougher than when I’ve seen him before; he’s 77 and the temperature was in the 50s. He still has unbelievable vocal control and you can hear his falsetto color some of the stuff that his natural register used to be able to bridle and hold. It doesn’t sound bad, just older. He has acclimated his secondary instrument, his voice, to get the most out of it at his age. He growls at times and his higher notes come out as a smoky whisper.

Hitchcock supposedly placed pantyhose over his lenses to add that glowing, sheer quality to Grace Kelly, Tippi Hedren or one of his other blonde sirens and Merle’s voice has this sheen to it, although his is entirely real and natural. He falls from note to note at the end of phrases, sounding almost R&Bish. Merle, as a vocalist, is still better than most pros and uses his weathered, aged instrument to the best of its abilities, never straining but replacing virile, gut-flexing diaphragm delivered dispatches with softer, more eloquent dips and jukes. He sounds like Deion Sanders used to move. He still does all his tunes in their original key and when his wife Theresa and daughter Dana, along with Mr. Joss, fill out the big choruses, you don’t notice his age.

Merle’s son Ben plays guitar, mostly the iconic solos made famous by Roy Nichols, with some extra licks and bends that Roy never committed to wax. Ben is a real sick motherfucker, and I wonder how much is genetic, or raw talent, and how much his old man was on him to be a picker. The chemistry between Ben and Merle is great and it makes me feel sentimental to think how proud Merle must be of his youngest son’s abilities. Abilities that make fledgling musicians like myself hate the bastard.

Norm Hamlet, the bandleader, steel player, and oldest Stranger in years and time spent with Merle, who you can’t write a piece about The Hag without giving some ink to, gets his time in the spotlight as Merle calls solos, at his leisure, throughout the night. The set ends with Merle promising to see us during the second set of the show. A promise that he doesn’t deliver on after retreating from Willie’s famously cloudy bus just minutes before Willie Hugh Nelson of Abbott, Texas takes the stage. This is where shit gets real.

Jeffrey Burton
Willie Nelson at his three-day residency at Whitewater Amphitheater in New Braunfels
I have always subscribed to the gate-crashing credo that if you act like you belong, you do. With this in mind I lowered my head and made my way through the roped off VIP line behind a large iron gate back to where Honeysuckle Rose was idling. It stank like bud. An octogenarian in an ankle-length duster and battered cowboy hat was pulling from a pipe and blowing smoke just a couple of feet away from the cop on duty corralling folks way from Willie’s bus. It was beautiful. It seems in the presence of Willie, even cops turn into good-humored pussycats. Out comes Merle with Theresa and a minute later, Willie. I see Jim Christie, Merle’s drummer, and ask if he’d like to say anything on the record.

We settle down into the green room for him to eat and me to try to contain my schoolgirl giddiness of being backstage surrounded by such total fucking legends. Jim tells me what Scott Joss and later Willie’s harmonica player, Mickey Raphael, echo throughout the evening: these two men are “the end of an era.” When I asked Mickey what he would do if just starting out now as a 20-year old harmonica player — the age he joined The Family — he states, simply, “Learn to weld. It’s the end of an era. Learn to weld.”

If Willie and Merle came along today, they would never make it. Our times don’t appreciate their kind. That is to say, the music industry would not be beating down their door to sign them to million dollar record deals. Music, of course, wouldn’t be what it is today without these two, so it’s a paradox to even bother with the quandary of “Would Willie and Merle make it in today’s marketplace.”

Nevertheless, all three of their trusted sidemen spoke with humility, humor and awe at their places in the band with these living legends. I didn’t get to see but the last twenty minutes or so of Willie’s set but I watched it from the stage about thirty feet behind Sister Bobbie’s piano. He sounded great, even spent time with his phrases, relishing their musicality. He looked old as hell, but distinguished. His pale, Indian profile clearly distinguishable as he turned to wipe the sweat from his face.

I don’t want to be too sentimental or just gush all over ‘em, but these two men came up in a different time. They are a gateway to the past. To a time when each city limit they entered greeted them with a custom sign, tailored to and for that community. Where the restaurants, bars and night spots spelled out where its inhabitants were from, where they were and where they might be going. Before every town looked the same, before McDonald’s and Starbucks and KFC/Taco Bell/Pizza Hut homogenized the stripped landscape, washing the country in an emblematic fog of where the capital exponentially goes. Just like that landscape, torn from the American Indians and shaved to make way for the Manifest Destiny of the modern American marketplace, these two are still just trying to be true to Jimmie, Django, Ray, Hank, the Playboys, themselves and the music.