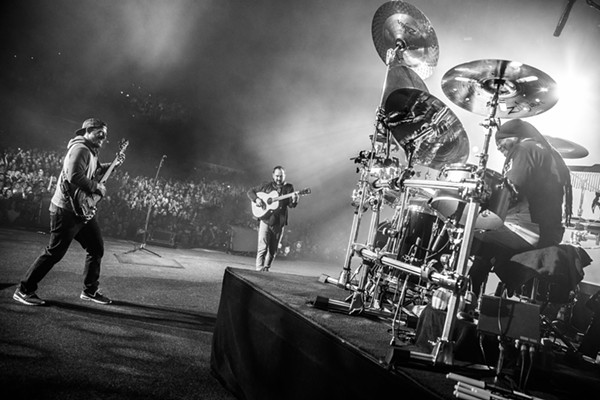 Currently putting the finishing touches on an untitled album, which will mark their ninth studio release, Dave Matthews Band is going on tour this summer with tickets coming with a CD copy or download of the new record according to the band's website.

The tour kicks off in May in The Woodlands and hits pretty much every major Texas city except for, well, us.

Are we not white enough as a city for Dave Matthews to come here? I mean, not that we’re totally devastated about the band skipping the Alamo City, it’s just funny to realize that, as a whole, we don’t dig frat-boy rock (even though John Mayer did make an appearance last year).

To be fair, that acoustic shit Matthews did with guitarist Tim Reynolds was actually pretty dope (check out 1999's Live at Luther College at your leisure). Plus, their drummer Carter Beauford is one of the best in the industry. But I don't know if it's such a great loss that the band isn't touching down in the Alamo City.

But with artists continuing to extend tours left and right lately, there could be a chance the band could ... crash into us ... (see what we did there?).