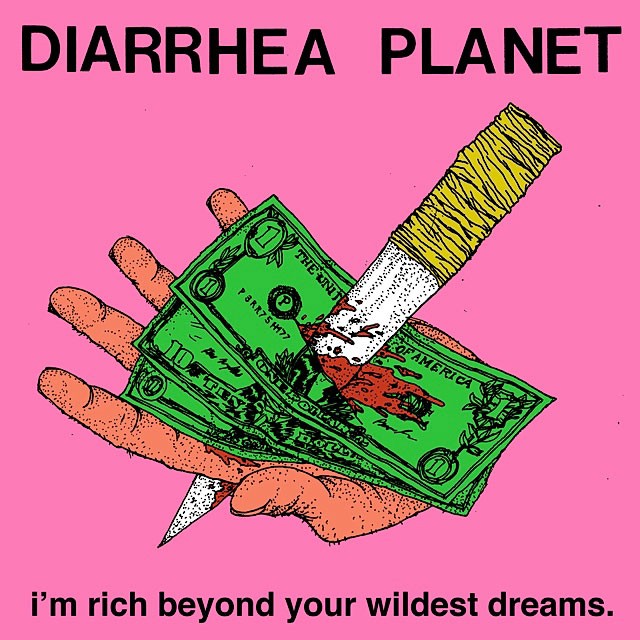 In March of 2012, after wandering about much of the day, I settled on a SXSW showcase at Cheer Up Charlie’s. I had heard a group called Diarrhea Planet would be playing. In fact, you can read my recap here. The six-piece Nashville rock outfit is well known for their live shows. As the group’s set came to a close, guitarists Evan Bird and Emmett Miller scaled the stage’s precarious scaffolding to have one last shred-off to the undeniably catchy tune “Ghost with a Boner.” I was hooked. Who wouldn’t be?

Diarrhea Planet makes music that could fit squarely on a looping basement party playlist while also being an omen for the eventual evolution of what is currently the low-fi movement. The latest release solidifies the group as a viable ‘next big thing.’ Go ahead, hang the card on ‘em. It’s a safer bet than the Cowboys taking home any hardware this year.

Much of the album’s pacing borrows from the similar, pragmatic approach as former tour partners, and previous Kevin McMahon-produced artist, Titus Andronicus. “Lite Dream” opens with a momentous build-up and closes with a harrowing and repetitive solo that drowns in a wave of sound. Jordan Smith’s unabashed lyrics sit playfully atop a well-glossed, yet still lo-fi, output.

First single “Separations” is a heartbroken outburst recounting the daunting process of being apart from the one you love and its all too likely end. It’s powerfully hip and somehow bursts with calculated pop tact.

Many of the album’s tracks were admittedly written or influenced from the time Smith and drummer Casey Weissbuch spent living together, spawning such restless revelations as “The Sound of a Ceiling Fan” and “Skeleton Head.”

One thing is for sure, I’m rich beyond your wildest dreams. has enough riffs to melt even the thickest skinned faces. If that’s not worth the listen, then your ears are useless.