Dignan, SA's Favorite McAllen Indie Rock Band, is Back after a 3 Year Hiatus 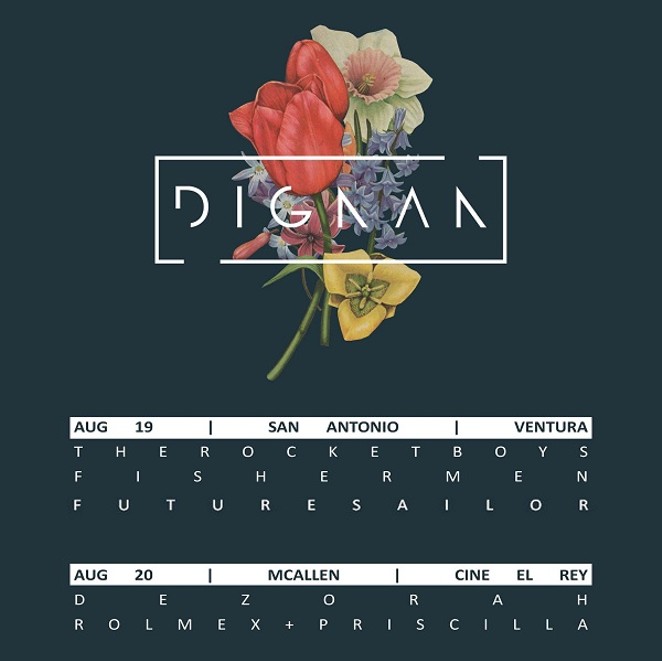 Courtesy
If you spent a lot of time digging live music around San Anto from 2005 to 2010, chances are you saw McAllen indie rock outfit Dignan a time or two.

Dignan, a hard working four-piece (sometimes more) with a penchant for adorning its alt/indie rock sound with dancey vibes, occasional reggae flourishes, and softly beaming vocals, was something of a fan favorite around town, especially at the Ten Eleven. Before disbanding in 2013, the band (first formed in 2003) toured relentlessly, released several good albums, gained some traction in the national music press, and amassed a loyal regional following. But, as so often happens with bands who reach a plateau of success, life came calling and scattered Dignan's members to Austin, to Seattle, to other lives to lead.

Now, with early 2000s nostalgia threatening to replace 1990s nostalgia (hopefully soon), the stars have aligned and Dignan will play two reunion shows: one in McAllen and another here, at Ventura. Whether you were a fan back in the day, or are hearing of Dignan for the first time as you read this, you won't want to miss this special show.

In an email exchange with the Current this week, lead singer/guitarist Andy Pena explained that "It just so happened that David (aux instruments, back up vocals) was going to be in town for a few weeks at the end of August, and Devin (bass) and I had been wanting to try to put together some kind of performance with everyone." When David jumped at the idea, the next step was convincing Heidi (keyboard, back up vocals) to come down from Seattle and the newlywed Trey (drums) to come from Austin. After some finagling, all acquiesced.

When I asked whether or not he thought the reunion might lead to anything else, specifically new music or the permanent restart of the band, Pena was doubtful. "There’s not really any sort of plan as to what could come after this, it's just something we’d been wanting to do for a while."

For his part, Ventura owner Michael Carrillo says he's jazzed to host Dignan, just as the former Ten Eleven did so many times. "Dignan has an incredible ability to capture you with every song, whether it's the great songwriting or the emotion of the music," Carrillo told us. "They get the love of this city like they are our own local band and we can't wait to welcome them back."

Meanwhile, Pena expressed his love for the old Ten Eleven in glowing terms:


"The Ten Eleven was always so intimate for us. We as a band always gravitated towards smaller dive bar type venues. Not that the Ten Eleven was any of that, but it had a very intimate DIY feel that we loved. The owners at the time took really good care of us and we knew they were fans, but friends too. There’s something about playing a small room with a packed sweaty crowd that can’t be beat. We’ve played quite a few venues in San Antonio over the years, and the Ten Eleven was the one we’d always come back to, just for the peace of mind of knowing the fans and attendees were there to really listen to music, and have a good time."