During Tuesday's San Antonio show, Lamb of God showed why it's still at the top of the metal heap

Even though it's entered into the third decade of its career, the band can channel its energy and captivate a crowd. 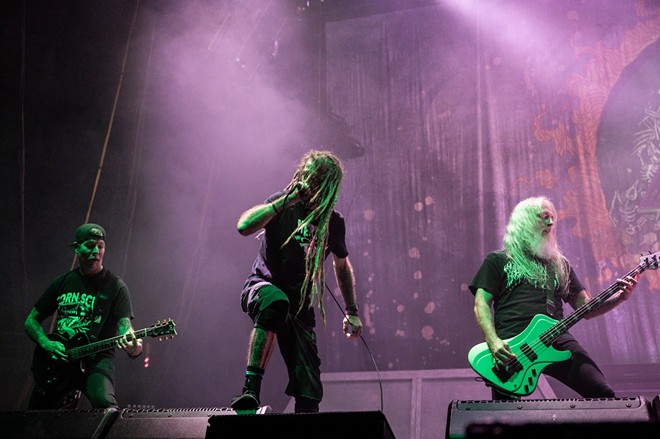 Jaime Monzon
Lamb of God frontman Randy Blythe knows how to command a crowd.
For more coverage of the show, see the Current's photo slideshow plus our interview with Lamb of God bassist John Campbell.

On Tuesday night, Lamb of God headlined a stacked metal bill at San Antonio's Freeman Coliseum that had moms, dads and kids lining up outside the entrance. That multigenerational appeal isn't surprising given that the band emerged just before 2000 and has continued going strong since.

While the next band down the bill, Killswitch Engage, has been around for roughly as long, more recent bands Animals as Leaders and Fit for an Autopsy filled out the rest of the tour. Despite the strength of the undercard, Lamb of God showed San Antonio why they're still loved by so many.


Starting off the evening on a heavy note, Fit For an Autopsy blazed through a punishing set of deathcore songs. Usually, the New Jersey-based band plays far smaller venues than the Freeman. However, its despair-filled riffs translated to the bigger stage, covering the crowd in a dark cloud that didn't let up.

Animals As Leaders lightened the mood with a technical display of guitar sweeps and polyrhythmic drums. The instrumental-only band's awesome display affirmed how it won its reigning position in the djent scene. But, with Lamb of God fans showing up to headbang, the odd time signatures might have lessened their connection with the crowd. Even so, the band amazed with its skills.

East Coast metalcore stalwart Killswitch Engage began its set with a parody of Van Halen's "Jump" but with the lyrics rewritten to be about being drunk instead. Predictably, the party-ready crowd went along for the ride.

It's worth noting that Killswitch has been touring on its most recent album, Unleashed, for almost four years. While that's not necessarily a bad thing, there wasn't much fresh in the setlist or stage setup for Killswitch fans. While the band executed its music almost flawlessly, there was less of a roar from the crowd than there might have been had things felt newer.

Still, under the green, yellow and red lights that pulsed through its set, Killswitch seemed to be having fun. The band even trotted out its metalcore cover of Dio's "Holy Diver" — because would it really be a Killswitch show if they didn't?

The audience's energy boiled over into full-on chaos as Lamb of God's banner fell in time with the band's song "Memento Mori." Maybe it was the track's "wake up" lyric or the punching guitar riffs, but the crowd was instantly enthusiastic again.

While Freeman was only half full when the Virginia-based headliners started — when was the last time anyone saw it full? — the band members knew what they had to do: make people move.

That's exactly what happened as Lamb of God tore into songs from the new album Omens, including the title track and "Greyscale." On the other end of the spectrum, the band performed fan favorites such as "512," "11th Hour" and "Ruin," spanning much of its discography. Whether a song was new or not, recently added drummer Art Cruz played it as it was intended to sound. Although faced with controversy when he first joined the band, he filled big shoes comfortably.

However, it was vocalist Randy Blythe who assumed most of the power on the Freeman stage, snarling out the lyrics to "Omerta" and illuminated by a light shining from below. He was even able to command a circle pit that almost took up the entire coliseum floor.

Maybe it was Lamb of God's blazing pyrotechnics, astute song selections or monumental stage presence that mesmerized the crowd — or maybe it was the huge, light up talisman-looking symbol that hung from the rafters. Whichever way, there was a reason the band connected with the crowd.

After all these years, Lamb of God still has it.