The Alamodome crowd sang along, chanting German lyrics as fire blasted through the building. 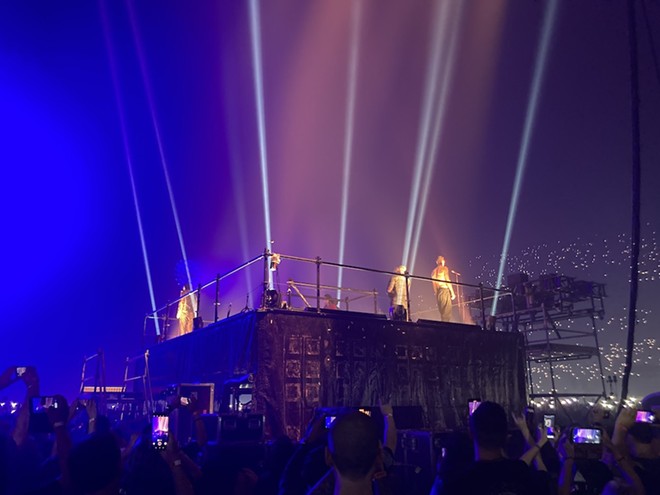 Garrett T. Capps
The members of Rammstein stand on a platform in the middle of the Alamodome.

For more Rammstein photos, check out the Current's slideshow of the event.

Around 40,000 people showed up at the Alamodome Saturday to witness the band's first headlining stadium show in the Lone Star State. Good thing it was a bizarre spectacle of ginormous proportions.

Rammstein is technically a one-hit wonder in the states — "Du Hast" from  1998 — but the band has gained massive international notoriety over the years through a pyrotechnics-heavy stage show and explicit, well-produced music videos.

With San Antonio known as a heavy metal-friendly city, it seemed like the perfect place for a gathering of such epic — and gothically industrious — proportions. Even if all the lyrics were in German.

France's Duo Jatekok opened the evening with duo piano versions of Rammstein songs (of course). The pair brought a mystique to the stage and offered a hint of the sardonic nature of the evening's experience, which had only just begun.

Rammstein's stage show somehow balances the corny rock 'n' roll theatrics of Alice Cooper with the breathtaking precision of a Cirque du Soleil stage production. The lights and brutalist architecture of the stage alone are a spectacle, but the fire is where it's at.

At various points during Saturday's snow, frontman Till Lindemann blasted the band's synth player with a flamethrower, explosions erupted from all corners of the general admission floor and, for some reason, a giant baby carriage was set on fire. 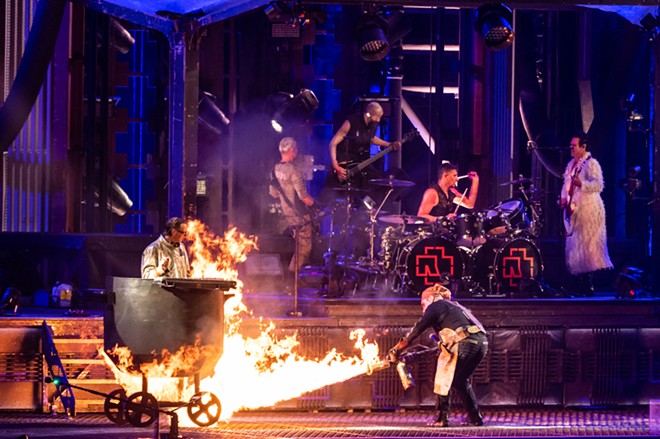 Jaime Monzon
Rammstein's frontman "cooks" the band's keyboard player in a pot during the show.

All slightly disturbing shit, but Bugs Bunny-cartoonish at the same time and somehow justified by the extreme nature of the show. German culture — well, at least this aspect of it — seems weird.

Just the same, Rammstein's enormous popularity in English-speaking countries is testament to people's connection to that weirdness.

The Alamodome crowd sang along, chanting German lyrics and waving their cell phones in the air. Fire blasted into the ceiling. Mosh pits formed in various parts of the general admission floor. Vendors ran out of cold beer. Hot dogs spilled onto the floor. The smell of vaped weed wafted everywhere.

People traveled far and wide for this shit. It was a true spectacle. And in San Antonio of all places. 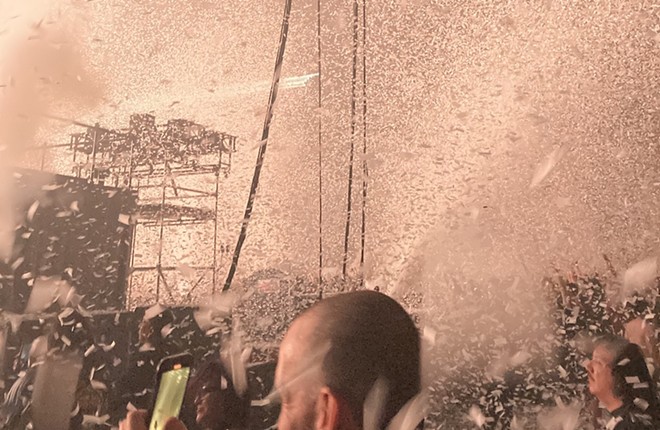