Diaz is taking steps to assemble another full-time band after dropping her second solo album, I Could Be You, You Could Be Me, on Aug. 18. 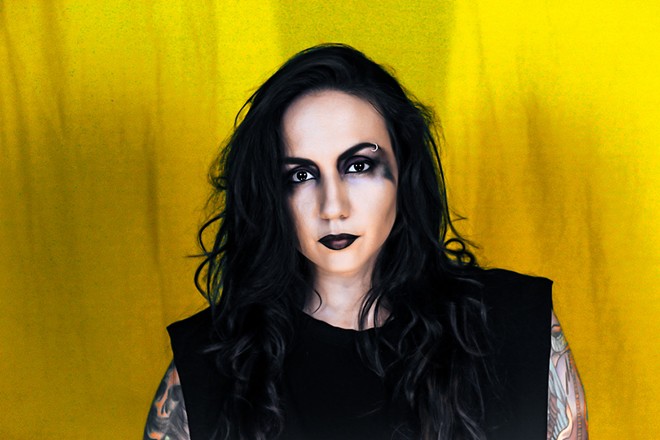 Courtesy Photo / Nina Diaz
Diaz's second album looks backward on some aspects of the Girl in a Coma sound.

Not many 34-year-olds can brag about having 20 years' experience in the music industry. But San Antonio singer-songwriter Nina Diaz got started early.

Her time as frontwoman of San Antonio alt-rock band Girl in a Coma began when she was in her early teens, and she helmed the group through an upswell of national attention, multiple recordings and tours. She was also there when the band called it quits in 2018.

Now, Diaz is taking steps to assemble another full-time band after dropping her second solo album, I Could Be You, You Could Be Me on Aug. 18.

The Current caught up with Diaz via Zoom around the time of the release. She was comfortably ensconced in her home studio, taking occasional drags from a cigarette, a drum kit and her guitars serving as a backdrop.

"If you see the early Girl in a Coma interviews through today, you see the progression of me," she said. "I would never talk."

But beyond that change in demeanor, Diaz noted that her approach to music has also shifted. For one, her solo albums put more of an emphasis on vocals, something that stands in contrast to the more unified presentation of a group recording.

"In a band, everybody's battling. In a solo situation, I put my vocals to the forefront and lay on the music, rather than everyone having their moment to shine," she said. "I took advantage of the opportunity to showcase my vocals more. If you want to dial in on the lyrics or the vocals or some nuances, that's what my solo stuff takes in."

Even so, I Could Be You does look backward on some aspects of the Girl in a Coma sound. It's heavier on guitar than her first solo album, The Beat Is Dead, for example, and she also eschewed the electronic flourishes that adorned that record.

The sonic shift also will be reflected in future live dates, Diaz said. She plans to play her guitar throughout the set, unlike shows supporting her solo debut, which found Diaz without her six-string for the first time in her live career.

"I re-connected with my Girl in a Coma roots, with the alternative vibe," she said.

And there may be one more reason she's feeling the old-school connection. Some of the songs on I Could Be You were originally going to be Girl in a Coma material. Those include "Silly Situation" and several tracks sewn together from pieces she originally intended for the band.

Listeners may find that I Could Be You reflects a newfound confidence from Diaz. In part, she attributed that to recording and engineering the record in her own home. Diaz also tracked all the instruments except the drums, which were played by Diaz's husband, Jorge Gonzalez of Pop Pistol.

"I went through war with myself while I made this album, but I'm really proud of it," she said of the recording process.

Diaz elaborated that she'd always liked the sound of the demos she cut to show her songs to other members of Girl in a Coma. The rough sketches reflected a lack of pressure — something starkly different from a band recording in a by-the-hour studio setting.

"Being here in my room, I was able to tap into a demo-like vibe but polish it up a bit," she said.

Also adding to her confidence, Diaz said a series of covers-only releases she put out during the pandemic helped hone her songwriting.

"It was like going to music school," she said. "I learned how to dissect a song and know that if I wanted this kind of vibe, I needed the recipe. Like a math problem almost."

Diaz's determination to be in control of her destiny isn't just limited to the music itself. She has founded BeatGirlProductions, a "grown up" project through which she hopes to channel her production and recording ambitions.

However, that investment in BeatGirl means that Diaz won't be undertaking any major tours unless she's asked to open for a larger act.

"That 13-year-old in me is like, 'What the fuck are you doing?'" she said. "I'm nurturing myself through this."

Taking care of herself hasn't always been Diaz's priority, a situation she remedied by embracing sobriety several years ago. The insights have prompted corresponding changes in behavior.

"Those triggers still come. This is where — in the past — I would drink. Or this is where I would get in a weird, random relationship because I wanted to feel loved," she said.

"Now when I see that, I take stock in myself. I ask what do I want to do? I might talk to myself or excuse myself from the room."

In other words, expect to hear honesty on I Could Be You, You Could Be Me.