Hacienda on Their New Line-up and Rare 502 Gig 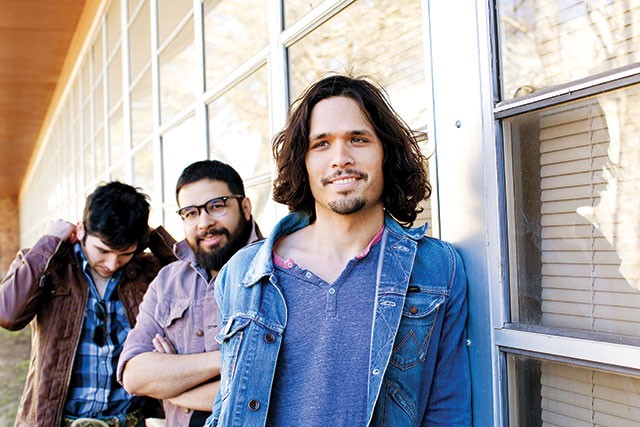 When classically trained brothers Rene (violin), Jaime (guitar) and Abe Villanueva (piano) moved to Boerne, their high school had no orchestra—so they turned to rock, with Rene switching to guitar, and Jaime to drums. No singing experience? No problem.

“It was all practice, practice, practice,” Rene told the Current at the band’s rehearsal space, an actual hacienda in the middle of nowhere (Boerne, technically). Now their two- and three-part harmonies are one of Hacienda’s most highly praised features, a testament to their devotion to the Beatles, Beach Boys, doo wop and ’60s vocal groups.

When cousin Dante Schwebel left the band after three albums, instead of freaking out, the brothers decided to change their sound and become a guitar-less trio. That philosophy of making lemonade out of life’s lemons has suited the band well so far. Shakedown (2012), their third album (again produced by the Black Keys’ Dan Auerbach), took them all the way to a live appearance on the Late Show with David Letterman and solidified their status as one of the top—and busiest—San Antonio bands.

“We can’t complain,” said Rene. “Everything’s has been going awesome for us.”

Yet, the band is practically starting all over again.

On his website, Schwebel—who moved to Nashville and at press time hadn’t replied to an email from the Current—wrote he’s been working on an album with Patrick Hallahan (My Morning Jacket), Adrián Quesada (Grupo Fantasma) and Patrick Keeler (The Raconteurs), “by far the most exciting project I’ve ever worked on,” but also had nice things to say about his cousins and the last album they all made together.

“I was very proud of [Shakedown],” Schwebel wrote. “It was the first time I felt that we reached our potential. ‘Pilot in the Sky’ is killer. I love ‘You Just Don’t Know’ and ‘Veronica.’ ‘Let Me Go’ is rockin’!”

When I ask Rene about Schwebel’s departure, for the first time in the interview his ever-present smile disappears.

“We saw it coming,” he said. “[Dante] started wanting to do different things and exploring new avenues, he felt he needed to do that. So we talked about it and decided he’d be happier doing his own thing and we’d be happier continuing on [without him]. This was the best avenue for all parties involved.

It was definitely a mutual decision.”

But how important was he? Who is going to replace him?

“Every person that’s around the making of an album is important,” said Rene. “He wrote a lot of parts, songs, arrangements, words for us, but we’re talented enough that, if something’s lacking, one of us can pick up the slack and toss it around and find new ways to approach things. We all can play guitar and we all can write songs and chords. It’ll be different ’cause [Dante is] not here, but I don’t think we’ll be missing or lacking anything.”

Thus, the Hacienda transition is in full force. Rene beefed up his bass, added an amp and he now plays with a pedal board after years of playing straight to the amp. Abe is adding not only effects but extra keyboards, so what you will see at 502 are the same songs you know but with a completely different package and sound.

“It’s actually been pretty interesting for us to approach music or thinking about the songs in a different way,” said Rene. “Will we get another guitarist? I don’t know. So far I think we’ll just keep it bass, drums, and keys, ’cause we’ve been liking it. I’m not opposed to guitar, but if we can do it just like this, it’d be pretty cool. It’s funny that some people find it shocking not to see a guitar player because they think, ‘How can you have a rock band without a guitar player?’ But it can be done, and we’re digging it. Necessity is the mother of invention. If you don’t have a guitar and you need to do a show, you need to get creative, and that’s what we’re doing.”

Along with Girl in a Coma, the Heroine and Hyperbubble, Hacienda is one of the “big” SA bands. But even though they don’t play here too often, they’re in touch with the scene and like what they hear.

“You should add Lonely Horse to that list,” said Jaime about the duo, in talks with Atlantic Records/Warner about re-releasing the My Desert Son EP as a full-length. “I hear they’re about to do something big.”

“I really like the bands in the SA scene,” said Rene. “I’m very proud of what they do ... I always feel that musicians are like a support group for each other, and I’m happy when they represent San Antonio anywhere, especially when we don’t have the aura places like LA, New York or Austin have. We play a lot around the country and, unfortunately, we play less and less in SA. So this gig is a special one for us. We’ll play with two cool bands at a cool place for the first time, so it’s a double bonus.”