'How Music Got Free'Details The Fall Of The Music Industry Empire 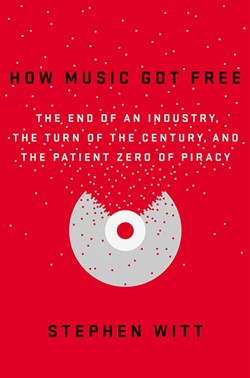 In the 1990s, music executives reveled in unprecedented piles of cash. Pressing CDs for under a dollar and selling them for $17 at Borders, F.Y.E and other extinct retailers, the Big Six label conglomerates were eating fine in the industry's salad days. In 1999, music sales peaked at $14.6 billion. But a let-them-eat-cake attitude toward early file-sharing trends on the web quickly put industry profits in line for the guillotine.

The first book from economist and journalist Stephen Witt, How Music Got Free, tells the story of the fall from the perspectives of three men trying to make a profit and a mark on the world. At a pressing plant in North Carolina, Dell Glover becomes the "patient zero of piracy," ripping high-profile albums for the most prolific leaking group of the day. In Germany, Karlheinz Brandenberg invents the MP3, accidently whetting the axe that would chop away at the recording industry. And at the top of the food chain, Universal Music Group CEO Doug Morris fights to maintain his life's work — defending Death Row Records, cutting artist advances, inventing VEVO.

As far as the stories go, Dell Glover's pirate tales are the most riveting chapters in the book. Glover's desire to upload provides a longform peek into the semi-altruistic, Wild West culture of the early internet, where ideas of community and anarchy fought each other for dominance.

It's also remarkable to learn just how many marquee albums Glover leaked in his peak years. If you downloaded MP3s from Napster or one of its hydra-like imitators, you could trace back your music to Glover, sneaking out albums in the big, hillbilly belt buckles of his coworkers at the North Carolina plant.

Witt asks and answers many of the right questions in How Music Got Free. As the iPod became a household name, Apple acted "almost like a money launderer for the spoils of Napster." As file-sharing services quickly unbundled a release to its component singles and ignorable filler content, some artists bailed on the idea of the album as an artform. Or, like Lil Wayne, an artist could reject the entire release system, getting weird on mixtapes with uncleared samples and leaking his work before a pressing plant employee had the opportunity.

Ultimately, it is the musician that is overlooked in How Music Got Free. A document on the troubled waters of recording sales, Witt largely ignores the talent that keeps the industry afloat, however shoddy the raft is these days.

Witt does point to the decline of the market as the rise of the age of the music festival. In 2011, Americans spent more money on concerts than on recorded music "for the first time since the invention of the phonograph."

Still, nothing is mentioned of the medium-tier musician putting in thousands of miles of van time. After music "got free," artists like Mac Demarco and St. Vincent, owners of some of the best records of 2014, each found themselves on over 100 bills last year to pull together an income.

How Music Got Free