In the Winter of Our Discontent: Our Top Picks for Metal Shows in San Antonio to Close Out 2018

Anthony Barlich
The Devil Wears Prada
Isn’t there something about cold weather that makes you want to put on wrist studs and your black Motorhead T-shirt and listen to the most aggressive metal in your record collection? We can’t be the only ones. Anyway, these are the metal shows you should check out as we close out 2018. Our picks cover most metal subgenres, and will keep fans head-banging into the new year. Enjoy.

Silver Talon, Speedclaw. X.I.L.
Tuesday, November 27
Heavy metal to its core, Silver Talon will make you want to re-dedicate yourself to the dark lord. The Portland-based group, whose members all came from the band Spellcaster, are definitely for fans of Yngwie Malmsteen, Savatage, Sanctuary, Queensrÿche and Helloween. And if you don’t really dig old-school or classic metal, this band probably could make you a believer. Seriously, they rip. With Croatian quartet Speedclaw and San Antonian thrashers X.I.L. $10, 8pm, The Guillotine, 1816 N Main Ave.

Drowning Pool
Saturday, December 1
OK, before you throw your computer or phone or wherever you’re reading this, chill out. While Nu Metal was certainly one of the most commercial and uncool periods the genre went through, it wasn’t terrible and Drowning Pool wasn’t the worst band out there. So, go ahead and let the bodies hit the floor, y’all. After gracing us with their nu-metal riffing at Oysterbake in April, Dallas-bred Drowning Pool are back because we still love all things Nu Metal and ’90s. $21, 8pm, The Rock Box, 1223 East Houston St., therockboxsa.com.

Void Vator
Sunday, December 2
Hailing from the streets of Los Angeles, Void Vator took me by surprise at first listen. While I usually get into most of the bands that Sell Your Soul promoter Loy Smoak brings through SA, I was considerably impressed by this thrash-inspired rock ’n’ roll quartet whose singer/guitar player and drummer share Uruguayan roots. And though neo-thrash has been rearing its head since the early aughts, it makes sense that these guys mix a little bit of it into their sound, considering how popular thrash metal is in South America. Void Vator might become your favorite new band. $5, 9pm, Limelight 2718 N. St. Mary’s St., thelimelightsa.com.

The Devil Wears Prada
Tuesday, December 4
Birthed from the distortion that brought us bands like Norma Jean, Underoath and Zao, The Devil Wears Prada were another early-aughts, Christian metalcore band that managed to soar beyond the genre’s mediocrity and staleness. After recently signing with Christian metal/hardcore label Solid State (Norma Jean, Phinehas, Silent Planet, Wolves at the Gate), the band has announced a strong spate of shows for their With Roots Above And Branches Below 10th-anniversary tour. Also on the bill are the emotive Wolves at the Gate and a duo called ’68, which features guitarist/vocalist Josh Scogin, the original vocalist for the aforementioned Norma Jean and The Chariot. $19.50, 6pm, The Rock Box, 1223 E Houston, therockboxsa.com.

Uada
Saturday, December 8
If you find the combination of ghastly snarls, blast beats and tremolo-picked, spooky, electric guitar riffs soothing, then you are a fan of blackmetal. One of the most abrasive genres in the wide spectrum of metal, blackmetal isn’t for everyone, and not just any band can be good at it. But Portland’s Uada is one of them. Since bursting on the scene in 2016, Uada became the talk of the dungeons, castles, deep forests and wherever else blackmetal is discussed and judged. Bask in darkness and get to this show to see arguably one of the fastest-rising stars in this unholy genre. $10, 9pm, Limelight 2718 N. St. Mary’s St., thelimelightsa.com.

Halestorm + In This Moment
Tuesday, December 11
Morphing from their metalcore roots – think As I Lay Dying and Parkway Drive – into a more active-rock sound, In This Moment continues to press forward, releasing albums as recently as last year. And the LA-originated group hasn’t stopped securing new fleets of fans. On tour with co-headliners Halestorm along with New Years Day, all three groups continue to prove that girls rock just as hard, if not harder, than their male counterparts. $49.50-$79.50, 8pm, Aztec Theatre, 104 N. St. Mary’s St., theaztectheatre.com. 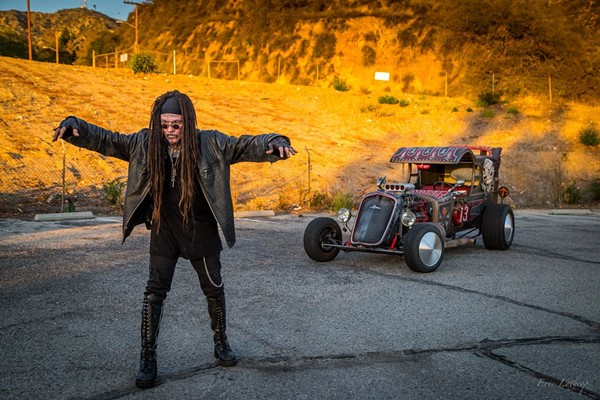 Facebook / Ministry
Less than a year after their performance at the Aztec Theatre, industrial metal gods Ministry have announced a return to San Antonio. That’s right – good ‘ol Al Jourgensen (who’s now 60) and the boys are headed to the Alamo City on Friday, December 14, to deliver another onslaught of grinding tracks to a city that’s been pretty supportive of the group since their rise to fame in the mid-’80s and early-’90s. So if you missed them last year, here’s your chance to see the guys as they continue to tour in support of their latest release AmeriKKKant. $30-$59, 8pm, Aztec Theatre, 104 N. St. Mary’s St., theaztectheatre.com.

Steven Wilson
Friday, December 21
OK, so technically Steven Wilson is not really metal at all. But hear me out, y’all. The technicality and musicianship of the dude’s songwriting and guitar playing are absolutely on par with the most intricate of shredders. Lemme explain: contributing to and collaborating with numerous bands of varying genres, including fantasy prog metal heads Dream Theatre, dark/folk metal band Opeth and controversial Israeli artist Aviv Geffen, multi-instrumentalist Wilson has a sprawling catalog of prog music that’s impressive as hell. Probably best known as the frontman of English rock band Porcupine Tree, Wilson has been nominated for four Grammys on top of being judged by Guitar World magazine as one of the 15 best progressive rock guitarists. And the prog god will be headed to the Aztec Theatre to shred our faces just in time for Christmas. $35, 7pm, Aztec Theatre, 104 N. St. Mary’s St., theaztectheatre.com.

Trans Siberian Orchestra
Sunday, December 23
You know, there are some scary as fuck Christmas songs out there. “Carol of the Bells,” “Greensleeves.” So, I mean, Christmas can just be as metal as you want it to be. Do you like shredding guitars and epic orchestral movements with angelic choirs singing while flames ignite a stage? Do you think it would be cool to see all of this packed into an explosive night of metal and holiday cheer? Then the Trans Siberian Orchestra show is most definitely for you. With their head-banging rendition of the aforementioned “Carol of The Bells” and other aggressive covers of holiday songs, Trans Siberian Orchestra has been spreading its love for epic Christmas movements since the late ’90s and are coming to town to remind us that tinsel isn’t the only thing metal about Christmas. $45-$79, 8pm, AT&T Center, One AT&T Center Pkwy., attcenter.com.