The band dropped its brand-new album Dripfield earlier this month and earned praise for the indie-rock influence on its sound. 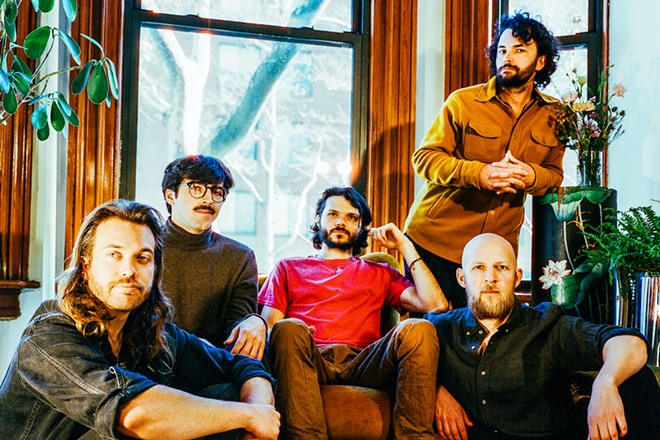 Courtesy Photo / Goose
The band Goose recently played its most-attended show ever: a slot at Bonnaroo.
Goose is having a moment.

Those guests encapsulate what Goose is going for: an indie-jamband hybrid. The style is fully in effect on the band’s brand-new album Dripfield, which dropped Friday, June 24. The day after, the quintet made its national TV debut on CBS Saturday Morning to play three songs from Dripfield.

Part of Dripfield’s charm is that indie spirit, coupled with frontman Rick Mitarotonda’s use of vocal effects and inspiration from Bon Iver and Poliça, something he talked about previously with this writer.

Let’s be honest: jambands usually aren’t noted for great LPs. Genre pioneers the Grafeful Dead only dropped two real classics, American Beauty and Workingman’s Dead, despite selling out stadiums and cementing a legacy as on of the '60s iconic acts. And Phish? While they have some fan favorites, only 1996’s Billy Breathes has big appeal outside of genre enthusiasts.

With Dripfield, the members of Goose are looking for their moment to reach fans who otherwise might be turned off by the genre’s excesses — namely looooong jams.

We caught up with Goose keyboardist — and sometimes guitarist — Peter Anspach in May via Zoom. The band had just played the Sweetwater 420 Fest to a crowd of 25,000 people. It was Goose's biggest gig at the time, but in less than a month the band already beat that record with a packed gig at Bonnaroo in early June, although no attendance figures were available.

Tell me about the recording process for Dripfield.

Dripfield was the coolest recording experience of my life. The producer we found was this guy, Dan Goodwin. We went up to his studio and we were like, “Where should we record this?” And he’s like, “Come to my place. It’s not too big, but trust me, it’s gonna be awesome.” So we go up to the mountains of Woodstock, and we get there and we walk in and there’s instruments all along the walls. And there’s this drumset set up in the middle of the room that looks like he found it on the side of the street. It looks tattered and terrible. I’m like, “Oh, geez.” And he says, “That’s the kit we’re gonna use.” So we set up for the first song, when [drummer] Ben [Atkind] was playing this old kit, and I walked in there and was like, “Holy shit, here we go! This is crazy!” [Goodwin] didn’t have a ton of stuff, but he knew how to use everything really well. When you hear “Hot Tea,” you’re gonna hear that it’s different than how we usually play it. He said, “I want this one to sound like a drugged out '70s funk band.” We usually play it really fast, so on the record it’s different.

Thinking about older bands such as the Dead, if you had the opportunity to be in the John Mayer role in Dead & Company (filling in for Jerry Garcia), what band would you choose and why?

First of all, I don’t know if I could fill in in that way for this band that I’m about to mention. But I would love to play with Ringo and McCartney.

Well, at least you’re not putting yourself under any kind of pressure.

(Laughs.) I’ll go with The Beatles. I don’t think you can get much better than that. The show’s only like 30 minutes also. Although it’d probably be more like the McCartney show now, which is like three hours, non-stop.

What is your favorite obscure album?

My favorite album of all time is The Blues Brothers (Original Motion Picture) Soundtrack. I’m gonna say it’s the most underrated LP of all time. I can put it on any day of the week. It does not get old for me. I love those songs. The performances are unbelievable.

You didn’t start playing keyboards until you joined Goose. How did you master the instrument so quickly?

Honestly, I don’t know! I took a few months of piano lessons when I was 9 years old, just basic stuff. And I’ve been taking guitar and music theory since right after piano. I had the opportunity to join Goose. Rick asked me about that right at the end of 2017, if I could learn some keyboards. I was like, “Sure, why not? I’m up for the challenge.” I had a rudimentary idea of how to play keyboards in a band. I had been listening to the Grateful Dead, Phish, all these great influences on how to improvise on keys and the functionality of what that entails. I had a basic understanding of what my role was going to be, so it was just a matter of getting the fingers, you know?

It must have felt different being on keys. Most people when they start playing an instrument don’t make their debut in front of a crowd.

I joined the band and then two or three weeks later we went on tour with Spafford. There were probably 800 people per show. And fans showed up early. I had just learned the songs. And I was also singing harmonies for the first time in a band. It was all a whirlwind. We have a song called “Flodown,” which is kind of a fast bluegrass tune. I think we only played it once on that whole run just because I was so nervous to play it. I was like, “I don’t have this.” I was like, “Guys, can we not?” I remember weeks later I said, “Guys, I’ve got it,” and we played it a lot. Funny memories like that.

Dripfield is available on Goose’s Bandcamp page and is streaming on all major services.