Napalm Death, D.R.I., Left to Die and a strong package tour with Amon Amarth also have SA in their crosshairs. 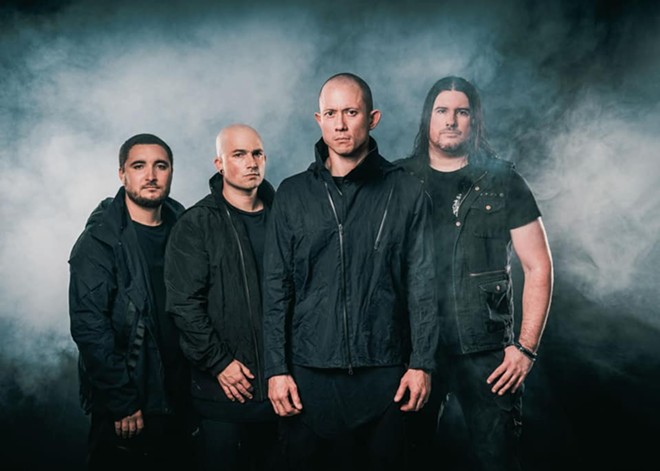 Courtesy Photo / Trivium
Trivium will tear up San Antonio in November.
With the worst of pandemic hopefully behind us, bands have announced so many tours that the average concertgoer may have a hard time keeping up. That’s especially been the case for metal acts.

As evidence of the explosion in metal tours over the past few weeks, here’s an update on all the big ones headed to San Antonio for the rest of this year.

While its name may not be familiar, the concept behind Left to Die is something fans of double bass drumming and growled vocals can get behind. Named for a song by death metal pioneers Death, the group includes former members of Death and current members of Gruesome touring to present Death's seminal albums Leprosy and Scream Bloody Gore to live audiences. $25-$30, 8 p.m., The Rock Box, 1223 E. Houston St., (210) 772-1453, therockboxsa.com.

Yes, the Freeman Coliseum is still hosting rock shows, and Lamb of God is going to put the venerable venue to good use on an upcoming tour with Killswitch, Animals As Leaders and Fit for an Autopsy. This one's for all those old school metalcore fans — and the newly indoctrinated middle schoolers now discovering heavier music. $39.50‐$172, Freeman Coliseum, 3201 E. Houston St., (210) 226-1177, freemancoliseum.com.

The Trivium guys just announced a full North American tour with a lineup seemingly geared to satisfy a wide variety of metal listeners. Support will come from the proggy depths of Between the Buried and Me, deathcore-turned-prog-band Whitechapel and doomers Khemmis. Trivium is hitting the road in support of both its newest release and its previous album, released during the pandemic. 7 p.m., Aztec Theatre, 104 N. St. Mary's St., (210) 812-4355, theaztectheatre.com.

Pioneering grindcore band Napalm Death got an early start on announcing its latest barnstorming tour. San Antonio favorite Brujeria, Texas natives Frozen Soul and hardcore punk legends Millions of Dead Cops will provide support on this portion of its U.S. jaunt. Be warned: this is the type of show where your body is going to hurt the next day from all the moshing. $25, 7:30 p.m., Paper Tiger, 2410 N. St. Mary's St., papertigersatx.com.

In support of a forthcoming album, viking enthusiasts Amon Amarth have assembled a bloodthirsty raiding party of package tour that will feature openers Carcass, Obituary and Cattle Decapitation. With this many extreme metal greats on one bill, count on SA metalheads to come out in force. $39.50-$162, 6:30 p.m., Aztec Theatre, 104 N. St. Mary's St., (210) 812-4355, theaztectheatre.com.

In a testament to just how much San Antonio worships Judas Priest, the headbanging juggernauts will hit the city again — twice, actually — on its sprawling 50 Heavy Metal Year Tour. Yep, the same one that already came through in March. Queensryche will join the old timers on its two-night stand at Tech Port Arena. $34.50 and up, 8 p.m. Tuesday, Nov. 22 and Wednesday, Nov. 23, Tech Port Center + Arena, 3331 General Hudnell Road, techpostcenter.com.

The legendary hardcore punks-turned-crossover thrash pioneers haven’t forgotten to hit Sa Antonio, which they seem to do annually like clockwork. They’re just scheduling their stop toward the end of the year. Expect a mad thrashin' time full of sweat — and maybe even a little blood. $16, 7 p.m., Paper Tiger, 2410 N. St. Mary's St., papertigersatx.com.