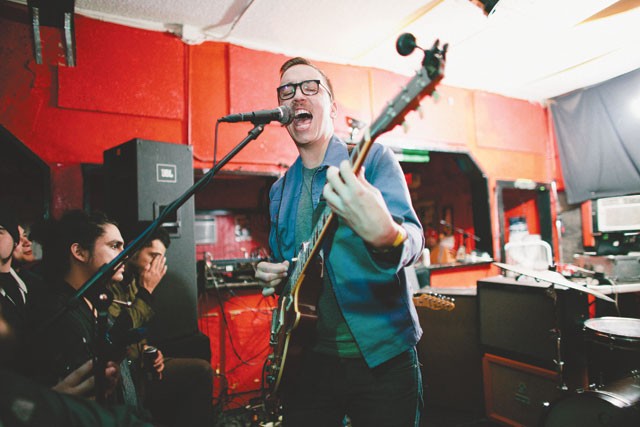 "We're here to remember a time before text messaging, before skinny jeans, when it was OK to be a local band ripping off Cursive," Jerid Reed Morris, guitarist/vocalist for Muldoon and (lately) Pillow Talk, told the crowd Friday night.

The time in question is 2006, the year Muldoon released their locally celebrated A Coat of Arms, a sprawling emo work with a reputation that still follows him to this day (apparently Morris got on the texting train later than most). With most of his original band re-assembled after a five-year hiatus (second guitarist Mike Arocha of Missing Andy filled in for the departed Alan Foster), Muldoon took the venue back a half decade.

Billed as "Muldoonion," the reunion show was a tightly-executed celebration, but it was neither as reverent nor fully explored as I had hoped. I expected the weight of A Coat of Arms' reputation and the significance of a five-year anniversary would merit an in-sequence performance of the album in its entirety. Shame on me for making assumptions.

They flirted with the idea, too. After Muldoon opened with the purging "Je Suis Un Espion" (translated as "I'm a Spy"), they took the first four cuts of A Coat of Arms in sequence (from the soaring "A Gossamer Opera" through the ballad-ish "Great Guns Alaska"). Drummer Lawrence Mercado (Sohns) looked positively thrilled to be slapping out the rippling opening snares of the title cut over Colin Bryant's (One Hundred Hands) creeping, earnest bass. The song's most poignant moment was also the show's best, wherein Morris scream-sang about buying guitars he can't play and shitting out songs daily. Former Sohns bassist and lovable bearded bear of a man, Wes Dunn, majestically sang the lyrics back to Morris. Muldoon wasn't just a good show happening on a Friday night; for those in attendance, it held some of their favorite music ever.

Muldoon also played the excellent "Numbers" (off a split EP produced with Houston's Mechanical Boy), the transcendent "Here's to Going!" and an emo-fied and de-tuned rendition of Katy Perry's "Extraterrestrial." Yet not a soul stepped away from the absurd but still enjoyable cover, suggesting that Muldoon can indeed play nearly anything to a warm reception. The hope is that they capitalize on the sentiment in five more years by considering A Coat of Arms in its entirety.