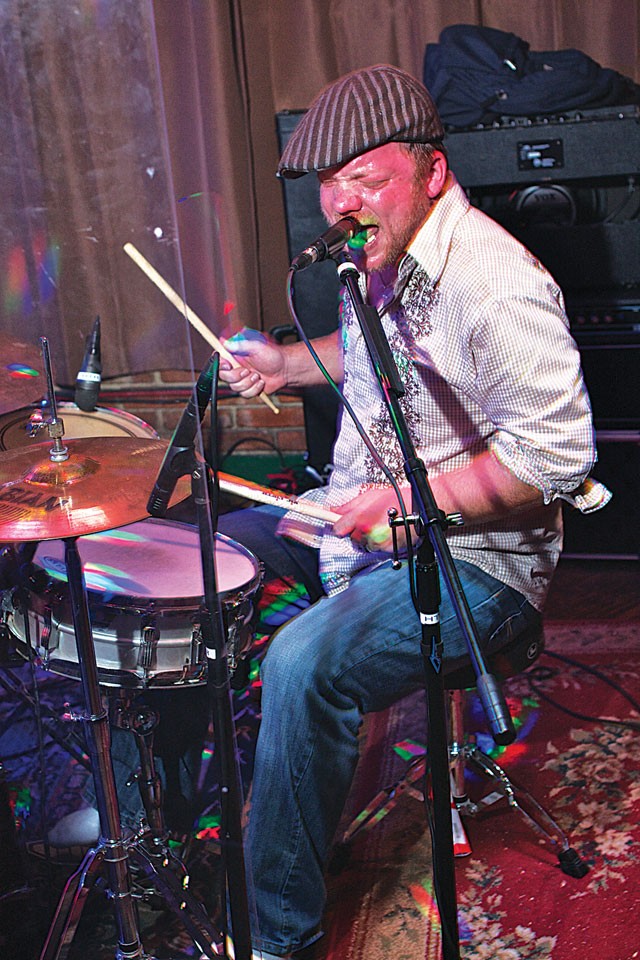 Drummer/singer Josh Walker likes to play loud. Real loud. So much so, that he plays behind a see-through acrylic drum shield, so he can pound freely without destroying anyone’s ears.

He’s a fine, solid drummer and, more than a singer, he has the voice of a talk radio DJ. But the shield wasn’t just meant to control volume levels — it was part of a show that has him as the center of attention, while bassist Johnny Etheridge and guitarist Eric Smith (literally and symbolically separated from Walker) do what they can to keep up with him. But it’s Walker’s show, no doubt, and at times it felt that the power trio format is nothing but two guys helping the drummer look and sound good.

The band has been playing for a little over a year, and if their five-song set (in a bill that also included Matt Hawk, Ledaswan, and Pop Pistol) is any indication, Saving Face is all about above-average power and average- and below-average songwriting.

“Who’s gonna have sex tonight?” Walker yelled in the beginning, the first of several coital references. He’s the type of singing drummer who juggles with his drumsticks, but he also likes to grab his head for a few seconds (as if overcome by ecstasy) while only playing the bass drum. As the night went on, his bedroom observations got steamier.

“Give it to me, Ledaswan…!” he said during an instrumental section of “Make It Quick.” “A little Pop Pistol in my ass,” he moaned, while the actual Pistols were looking at each other with a WTF expression.

At times, Saving Face goes at 300 mph with an indie rocker that sounds like heavy metal (“Follow Me”); in “The New,” Smith becomes The Edge, Walker turns into Paul Banks, and the band sounds like late Interpol (I said like late Interpol), while set closer “Let It Be” is what “London Calling” would sound like had it not been written by Joe Strummer and Mick Jones.