Live and Local: Tatsuya Nakatani on the Hays Street Bridge 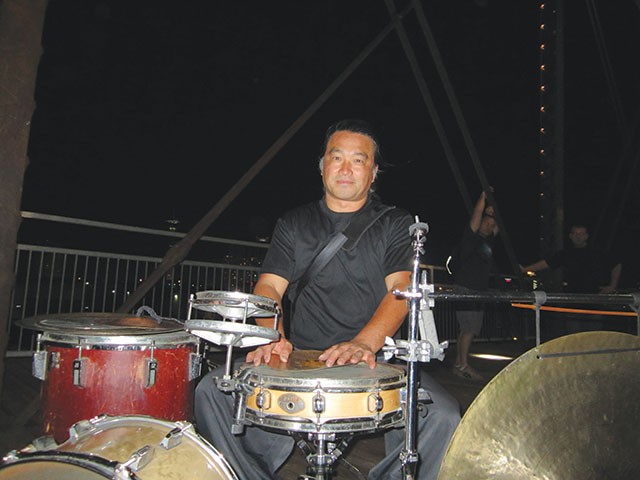 Ranging from sparse, five-piece kits to wraparound Neil Pert monstrosities, drums generally play a very traditional role in contemporary music, acting as the timekeeper. The drummer holds down the fort, grounding a band in rhythm to allow other musicians to veer off in directions of melody and harmony. From hip-hop to rock ‘n’ roll, conjunto to afrobeat, this principle remains true.

Kicking off the evening on the Hays, SA free jazz trio the Whale performed on the far east side of the bridge. Featuring Eddie Vasquez on alto sax, Justin Carney on double bass and Kory Cook on drums, the Whale focuses on collective improvisation, casting its net in various directions to see what each player can catch. Vasquez plays mean, beehive melodies over the anti-rhythms of Carney and Cook, who emphasize each strike as a performance of its own. The Whale has an impeccable hold over the drawstrings of energy, knowing when to stay grounded in hard bop, when to let silence in for spacing and when to wail.

After a brief apology that his playing would not carry properly outdoors, Nakatani began to play his spare kit composed of a gong, violin bow, kick drum, floor tom and assorted small cymbals. Nakatani slowly drew the violin bow over the top of the gong, mining extraordinary drones from the instrument. Varying the speed and length of his motion, Nakatani controlled the sound of these cinematic tones, ranging from light strokes to deep, stressful odes, like the warning knell from Inception. “I could feel that one in my teeth,” a friend said.

Nakatani then focused on the rest of his kit, massaging the head of the floor tom to exert bass groans and wild scratches. Placing the assorted small cymbals on the tom, he rattled the stack and pulsed on the kick drum, creating a rhythmic symphony like a cluttered kitchen in the Richter-scale blast of an earthquake. As this confusion grew, Nakatani blew into a cymbal’s stand hole, creating a cobra-like hiss over the mix.

In his artist statement, Nakatani says that he “make[s] sound by controlling Ma at the appropriate moment. Ma is a Japanese word meaning space, distance or silence. I have found the Ma complements sound itself.”

Towards the end of the performance, Nakatani was presented with a unique opportunity to confirm this statement. As he blew into his cymbals, a train chugged to the nearby depot, repeating its horn and the rhythmic thunk of its wheels on loop. Nakatani paused for a moment, emphasizing the intermission as a part of the performance, before returning to his bow and cymbal, extracting a note in unison with the train’s horn.

As a fan of experimental music and sound art, I’m disappointed in seeing a good deal of it live. The journey lies too often inside the performer’s initial creative process, inaccessible to the audience. Friday evening’s performance brought the genre back to the physical realm, capturing Ma and unknown sonic textures in real time. With access to electricity, lighting and a gorgeous Eastside vista of Downtown, it’s a shame more concerts aren’t thrown on the Hays (hint hint).