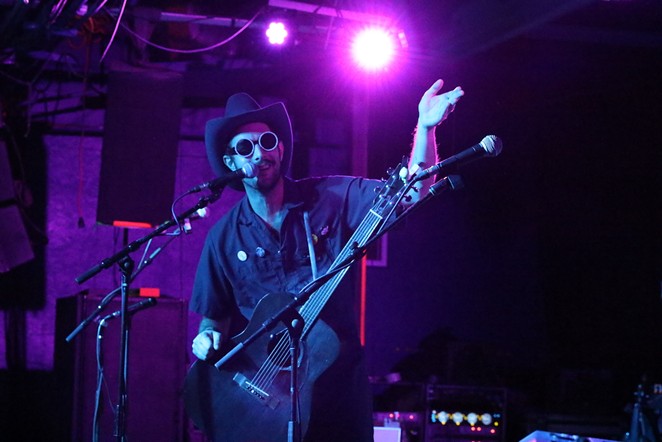 Katelyn Earhart
Garrett T. Capps at his album release show for I Love San Antone.
Depending on how old school or boundary pushing they feel, this week is going to be a busy one for Alamo City music fans.

Among the trad-side options, legendary Texas songwriter Ray Wylie Hubbard will play his 75th birthday party at a storied dance hall, while one of the premiere Beatles tribute acts will bop into downtown SA. But if you're feeling more sonically adventurous, 100 gecs will ply its "hyperpop" on the St. Mary's Strip, and Starset will set the Aztec Theatre's controls for the heart of the sun.

Okey Dokey
As if Motown didn’t already bring plenty of feels on its own, Okey Dokey takes the genre and mashes it up with psychedelic elements. It’s a sound that perfectly matches the band’s trippy visual direction. Reformed after an initial breakup, Okey Dokey continues to create new music with the help of session and touring musicians from other bands, including The Weeks, Wild Child and others. $13.50-$16, 7 p.m., Paper Tiger, 2410 N. St. Mary’s St., papertigersatx.com. — BE

The Fab Four
While the world certainly doesn’t want for tribute acts right now, the Fab Four has established itself as one of the most highly polished and best known. The California-based quartet has been active since 1997, treating audiences to performances that span the Beatles’ whole catalog. The group even won a 2013 Emmy Award for its PBS special The Fab Four: The Ultimate Tribute. $34.50, 8 p.m. Tobin Center for the Performing Arts, 100 Auditorium Circle, (210) 223-8624, tobincenter.org. — EB

Ray Wylie Hubbard, Dalton Domino
Revered Texas singer-songwriter-iconoclast Hubbard is celebrating his 75th birthday by performing at what’s been billed as the the oldest continually run dance hall in Texas. A go-to songwriter for performers including Willie Nelson, Lucinda Williams and Jerry Jeff Walker, Hubbard has been pivotal in Texas’ outlaw country and Americana scenes, even if his rough-hewn approach has made him more of a cult figure than a household name. Just the same, his latest album Co-Starring’s list of guest appearances, including Ringo Starr, Joe Walsh, Larkin Poe and the Black Crowes’ Chris Robinson suggests just how far his influence has spread. $20, 8 p.m., Gruene Hall, 1281 Gruene Road, (830) 606-1281, gruenehall.com. — Sanford Nowlin

100 gecs
Depending on your affinity for chirpy autotuned vocals, hyper-distorted beats and cartoonish keyboard melodies, you’re probably either one of the people who helped 100 gecs amass millions of online listens to its debut album 1000 gecs or someone who will fucking hate them within 30 seconds of hearing their music. Either way, the duo is considered one of the pioneers of a microgenre dubbed “hyperpop” for its exaggeration of all that’s artificial and excessive about contemporary pop music. Not surprisingly, teen TikTokers have latched onto both the genre and 100 gecs, but so have highbrow critics. The New Yorker celebrated the duo’s debut as “an impressively precise maximalist exercise with no rules,” and Pitchfork named the pair to its recent list of 25 Artists Shaping the Future of Music. Pick your side now. $23, 8 p.m., Paper Tiger, 2410 N. St. Mary’s St., papertigersatx.com. — SN

Jimmie Vaughan
The older brother of the late Stevie Ray Vaughan and a blues guitar legend in his own right, Jimmie Vaughan is perhaps best known as a member of the Fabulous Thunderbirds. But the Austin-based musician has also cut acclaimed solo albums and leant his hard-hitting guitar work to plenty of other artists’ recordings, including Nick Lowe and Gov’t Mule. $35, 8 p.m., Sam’s Burger Joint, 330 E. Grayson St., (210) 223-2830, samsburgerjoint.com. — BE

Myke Towers
Newcomer Myke Towers has made made quick a name for himself in the urbano genre thanks to a Bad Bunny collaboration and a triple-platinum debut. You can tell Towers is hungry by the way he released two albums and an EP within the past two years. $46-$247, 8 p.m. Freeman Coliseum, 3201 E. Houston St., (210) 226-1177, freemancoliseum.com. — BE