This week's live music options run the gamut from rock en español to jazz to honky tonk — and cover plenty of ground in between. 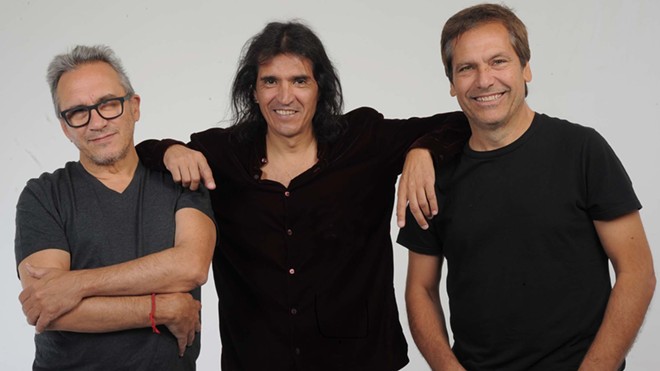 From a long-running rock en español act to a garage rock band with witty lyrics to country tunes from a former offensive lineman at Harlandale High School, San Antonio is awash in live music options this week.

The name Broadside certainly sounds like it's tailor-made for a pop-punk band. And that's exactly what you get with this Virginia outfit that features half-talking, half-screaming vocals and punchy instrumentals. The band lost its last original member in 2015, for what that's worth. $18-$20, 7 p.m., The Rock Box, 1223 E. Houston St., (210) 255-3833, therockboxsa.com. — Brianna Espinoza

With more 20 years leading bands through honky tonks, fairs and festivals, Creager has established himself as a Texas country heavyweight. His latest album, Gulf Coast Time, which features an all-star cast of musicians, pays homage to his fishing and seafaring upbringing near Corpus Christi. Expect to hear songs from the record as well as hits and fan favorites during his four-night stand at Gruene Hall, staged around his birthday. The first night promises an acoustic set. $20-$25, 8 p.m. Wednesday-Friday, 9 p.m. Saturday, Gruene Hall, 1281 Gruene Rd, (877) 856-0806, gruenehall.com. — Enrique Bonilla

Minneapolis-based trio Bad Bad Hats showcase the witty lyrics of vocalist Kerry Alexander over a '90s garage-rock sound. The band's latest release Walkman is a platform for the gentle sincerity of Alexander's voice, which paired with her driving guitar, evokes Liz Phair and Juilana Hatfield. The single "Detroit Basketball" offers a sample of her quirky lyrics: "Gotta find a man who deserves my kissing / and doesn't blow my money on the Detroit Pistons." $15-$100, 8 p.m., Sam's Burger Joint, 330 E. Grayson St., (210) 223-2830, samsburgerjoint.com. — DC

Just as the name suggests, the Reed Brothers are a duo of, well, siblings. These San Antonio natives both strap on guitars and perform their soul-fueled music with rugged, and at times delicate, vocals. Appropriate to their Texas origins, the bros also show some country roots. $15-$65, 9 p.m., Sam's Burger Joint, 330 E. Grayson St., (210) 223-2830, samsburgerjoint.com. — BE

The Read Southall Band may be just the ticket for those craving real-deal Southern rock. Stillwater, Oklahoma native Southall expanded his acoustic act in 2015 with the release of Six String Sorrow, an album that showcased a grittier approach. The band's latest effort For the Birds further diversifies its unique and soulful brand of rock, offering something for fans of anyone from Waylon Jennings to Chris Cornell. Austin Meade and Midnight River Choir open the show. $25-$39.50, 8 p.m., Whitewater Amphitheater, 11860 FM 306, New Braunfels, (830) 964-3800, whitewaterrocks.com. — DC

Beckmann is making waves in the country singer-songwriter circuit with a whisky-smooth voice and a deft hand at songwriting. The Del Rio native grew up on mariachi and Norteño music, and traces of those influences remain in his music. That's especially evident with the storytelling-style narratives in his songs. His lyricism pays homage to the simple but deep approach of Townes Van Zandt. $15-18, 8:30 p.m., Floore's Country Store, 14492 Old Bandera Road, (210) 695-8827, liveatfloores.com. — EB