Influential Christian singer-songwriter Crowder is among the acts booked for the free Unite: San Antonio revival. 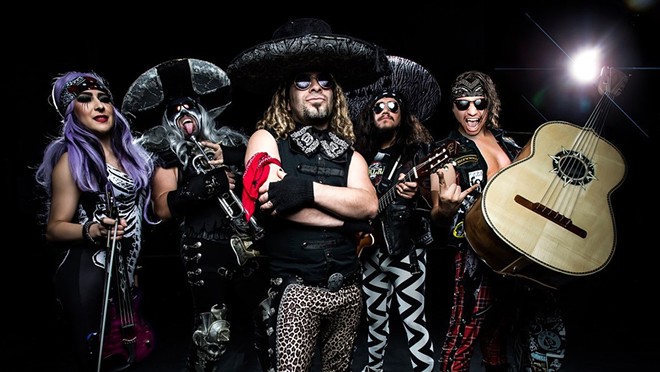 Courtesy Photo / Metalachi
Metalachi's oddball combo of metal and mariachi brings all the metalheads from the barrio together.
There's no excuse for San Antonio live music fans to get pulled into summer doldrums this week.

Fans of flamenco guitar, contemporary Christian music, old-school death metal and mariachi-hard rock fusion all have reason to leave the house. Read on for more details.

This performance is part of a 20th anniversary tour of the guitar maestro’s signature mix of Spanish guitar and dance music. Benise’s performances aren’t just about the music, though. He brings a large troupe of dancers for an evening described as “a cross between Latin Riverdance and Cirque du Soleil.” Benise has released a string of live and studio albums going back to 2000’s Taboo. He initially sought a career in rock but changed his direction after being exposed to flamenco. $34.50-$95, 8 p.m., Tobin Center for the Performing Arts, 100 Auditorium Circle, (210) 223-8624, tobincenter.org. — Mike McMahan

Left to Die’s artwork and logo are clearly tips to the hat to legendary extreme metallers Death. Fans of the genre might wonder, “Hey, isn’t Left to Die the title of an Obituary EP?” Digging deeper, the curious will find that none of this is coincidence. The band includes former Death guitarist Rick Rozz as well as — you guessed it — bassist Terry Butler of Obituary and formerly of Death. Expect the band to play Death’s influential 1988 LP Leprosy as well as tracks from the band's 1987 debut Scream Bloody Gore. $25-$30, The Rock Box, 1223 E. Houston St., (210) 225-3833, therockboxsa.com. — MM

The world’s first and — to our knowledge — only heavy metal mariachi band, Metalachi, is roaring back into the Paper Tiger. Described as “not your mama’s mariachi band” by the Houston Chronicle, the group combines the drama and passion of mariachi with the rip-roaring approach of heavy metal — and stirs a little cheeky humor into the mix. You've never heard "Crazy Train" and "Sweet Child o’ Mine" until you've heard them embellished with violins, trumpets and gritos. $10-$15, 7:00 p.m., Paper Tiger, 2410 N. St. Mary’s St., papertigersatx.com. — Michael Karlis