Live Music in San Antonio This Week: Modest Mouse, Miss May I, Ryan Bingham and more

Those who missed grabbing tickets for sold out shows by Texas country legend Robert Earl Keen and venerable LA punks the Circle Jerks have plenty of other options. 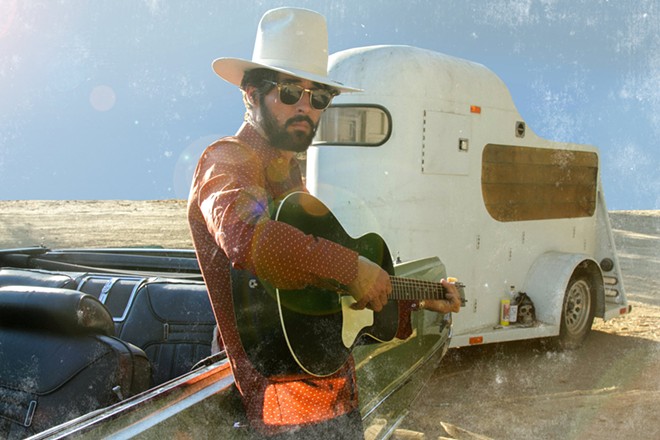 Courtesy Photo / Ryan Bigham
Singer-songwriter Ryan Bingham has racked up plenty of critical acclaim for his gritty and unusual take on alt-country.

Musical legends are descending on San Antonio this week. No, we're not kidding about that.

Legendary Texas country performer Robert Earl Keen is playing a three-night stand at Floore's Country Store as part of his farewell to performing live. Legendary LA punk band the Circle Jerks will slap its way into the Paper Tiger. And legendary indie-rock outfit Modest Mouse is scheduled to take the stage at Tech Port Center.

As expected the performances by Keen and the Circle Jerks are sold out, and we'll see how things go with Modest Mouse. The good news for those who didn't grab tickets is that is UK up-and-comers Wet Leg, alt-country troubadour Ryan Bingham and former Smiths guitarist Johnny Marr are also making tour stops here this week.

The term "buzz band" hasn't been thrown around much since the late '90s or early '00s, but it probably applies to UK up-and-comers Wet Leg, both because they're the subject of some buzz and their sound pulls from acts once branded as buzz bands: Elastica, Pavement, the Breeders and the Strokes. While the female duo's 2022 self-titled LP topped numerous UK charts, they haven't yet exploded stateside. $35-$127, 8 p.m., Aztec Theater, 104 N. St. Mary's St., (210) 812-4355, theaztectheatre.com. — Mike McMahan

The Devil Wears Prada, Stray From the Path, Dying Wish

Christian metalcore band The Devil Wears Prada continues to flog the road after the scene-kid explosion of the mid-2000s that fueled its ascent. For this tour, the outfit will play both its 2010 EP Zombie and its sequel ZII in full. With a 11-year gap between the releases, fans should expect a taste of nostalgia and the band's modern sound all in one night. The Devil Wears Prada's latest album Color Decay is set for release next month, so previews of that material are also likely. $23-$26, 7:30 p.m., Vibes Underground, 1223 E. Houston St., (210) 255-3833, facebook.com/vibesunderground. — Brianna Espinoza

No surprise these shows are sold out and have been for months, given that they're legendary Texas country artist Robert Earl Keen's farewell to performing live. The man is retiring, and by all accounts means it. Which means these Floore's shows are the end. You know that line from his most famous song? "The road goes on forever and the party never ends?" Apparently, he was lying. The line for the class action lawsuit starts here. Sold out, Thursday 8 p.m., Saturday and Sunday 7:30 p.m., John T. Floore's Country Store, 14492 Old Bandera Road, (210) 695-8827, liveatfloores.com. — MM

Southern California's Circle Jerks represent hardcore punk at its finest and rowdiest, and the band deserves a considerable amount of credit for helping create the genre. Even if some punk young 'uns don't recognize the name, they're surely familiar with the band's logo: a skanking, shaved-head punk who's emblazoned on countless, T-shirts, stickers and leather jackets. Openers 7 Seconds and Negative Approach also represent seminal bands from hardcore's golden era. Even though this one is sold out, it might be worth working on your punk cred by figuring out how to get on the guest list. Sold out, 8 p.m., Paper Tiger, 2410 N. St. Mary's St., papertigersatx.com. — BE

Minneapolis-based Motion City Soundtrack burst onto the stage back when the Warped Tour was in full force, and its blend of emo, pop and punk seems to embody that era. The band's angsty songs helped make it a staple of the outdoor festival's roster. Fast-forward and the band is celebrating the 17th anniversary of its album Commit This to Memory with this tour. Time to see how well they've aged. $30-$90, 8 p.m., Aztec Theatre, 104 N. St. Mary's St., (210) 812-4355, theaztectheatre.com. — BE

Portland-based indie-rock act Modest Mouse is heading to Saytown in support of its 2021 release The Golden Casket. Despite numerous line-up changes, the band formed by singer Isaac Brock in 1992 continues to mine an accessible sound fusing punk influences with broader aspirations that include pop, prog and atmospheric sounds. As evidence that the approach still works, it remains a headliner on the music-festival circuit. One-time guitarist — and former Smiths and Cribs member — Johnny Marr is said to be collaborating with the band again on a forthcoming EP. $28.50-$157.50, 7:30 p.m., Tech Port Center + Arena, 3331 General Hudnell Dr., (210) 600-3699, techportcenter.com. — Danny Cervantes

A former ranch worker and rodeo rider from the Land of Enchantment, Ryan Bingham got his big break when he won an Oscar for co-writing "The Weary Kind" for the Jeff Bridges film Crazy Heart. He hasn't rested on that laurel, however. The singer-songwriter has racked up plenty of critical acclaim for his gritty and unusual take on alt-country. His career has also placed him in front of the camera, including a role in Paramount Network's contemporary Western drama Yellowstone. $45, 8:30 p.m., Whitewater Amphitheater, 11860 FM306, (830) 964-3800, whitewaterrocks.com. — Enrique Bonilla

Metalcore act Miss May I hit underground success in 2007 when most of its members were still in high school, and it's continued to stick to its guns even as many acts in the genre have folded or moved on. The band has pushed its sound and consistently hits the road, supporting high-profile acts like Gwar and Hatebreed and headlining its own tours. Even though Miss May I has moved in a poppier direction over time, its signature sound remains a brand of melodic metalcore that places an emphasis on technical musicianship. $25-$30, 7 p.m., The Rock Box, 1223 E. Houston St., (210) 677-9453, therockboxsa.com. — EB

Legendary British guitarist and songwriter Johnny Marr's career spans decades of collaboration with a variety of groundbreaking musical acts. Marr may be most famous for the irresistible and jangly opening riff of "This Charming Man" from his time as lead guitarist and second-most-recognizable member of The Smiths. But since then, he's worked with The The, Electronic and Modest Mouse. Most recently, he collaborated with Hans Zimmer on the score for the James Bond film No Time to Die. Live, expect to hear a sampling of his work over the past four decades. $35, 7 p.m., Paper Tiger, 2410 N. St. Mary's St., papertigersatx.com. — DC