This summer is turning out to be hot time to catch performances by local artists and touring bands alike. 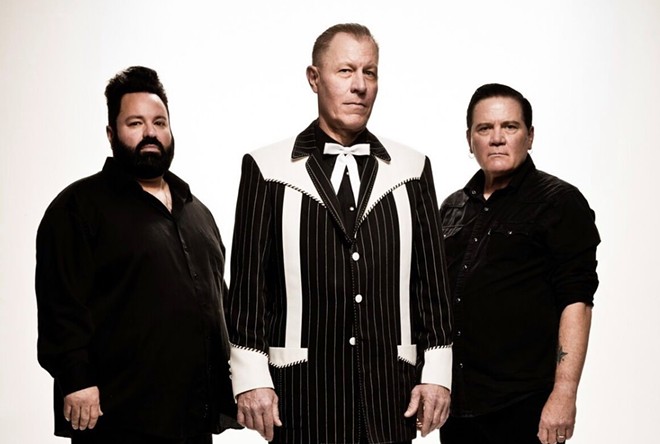 Summer months can be hit-and-miss for catching live music tours, but this week appears to be far more on the "hit" side of things. San Antonio will be awash in great music options, both from local acts like longtime guitar-slinger Jimmy Spacek and touring artists such as psychobilly heavyweight the Reverend Horton Heat.

The High Curbs' sound ranges from heavy, fuzzy goodness to upbeat, carefree punk vibes. The Southern California-based band likens the growth it's displayed over the course of its albums to the transition from youth to adulthood — evolving from thinking about pizza and girls to pondering bigger life issues. $15, 7 p.m., Paper Tiger, 2410 N. St. Mary's St., papertigersatx.com. — Brianna Espinoza

Decibel described Dead Register as possessing "plenty of substance when so many of the band's peers just have so much black nail polish." Which, of course, suggests this self-described "gothic doomgaze" act is doing something right. On the power trio's new album Alive, the tempo is exactly what you'd expect — slow — but the guitar playing is more melodic than that of most of its peers. Perhaps that's the gaze part, eh? $10, 9 p.m., Paper Tiger, 2410 N. St. Mary's St., (210) 310-5047, papertigersatx.com. — Mike McMahan

Denton native West has been making a name for himself by keeping a rigorous tour schedule that includes both headlining shows and supporting acts including Whiskey Myers and Koe Wetzel. On his latest release, Overgrown, the singer-songwriter's earnest approach breathes fresh life into country rock. Earlier this month, he reached half a million listeners on Spotify, suggesting all his hard work is paying off. $18, 7 p.m., Floore's Country Store, 14492 Old Bandera Road, (210) 695-8827, liveatfloores.com. — EB

After its original late-'70s and early '80s heyday, post-punk has been experiencing a recent revival. Austin's Haunt Me gets the mix right, offering up a sound that's dark and gloomy but plenty danceable. This show is the kickoff to the band's first tour, which will take it to 16 cities across eight states. Haunt Me has dropped nine releases since February 2021 including an album, an EP and plenty of singles. $15, 7 p.m., Paper Tiger, 2410 N. St. Mary's St., papertigersatx.com. — EB

If you've ever thought, "My significant other definitely reminds me of a state," the Josh Abbott Band has got you covered. Abbott is known for the ballad "She's Like Texas," which compares every physical trait of his love interest to the Lone Star State. But the singer-songwriter excels at more than that, offering up both good ol' boy party anthems and more introspective work. $25-$125, John T. Floore's Country Store, 14492 Old Bandera Road, (210) 695-8827, liveatfloores.com. — BE

Texas psychobilly stalwart the Reverend Horton Heat and his band are rolling into town again like a big red rocket of love. Corpus Christi native Jim Heath, a commanding guitarist and frontman, formed the group in Deep Ellum in 1986, eventually adding Jimbo Wallace on upright bass. Those two, along with a myriad of drummers — currently Jonathan Jeter — have managed to crank out a 30-year career aided by hard touring along with appearances on Beavis and Butthead and video game soundtracks such as the Tony Hawk series. Long-running cowpunk act Hickoids will open the show in appropriately chaotic fashion. $20, 8 p.m., Paper Tiger, 2410 N. St. Mary's St., papertigersatx.com. — DC

Benoit made a career channeling the sounds of the bayou into his gritty, soulful blues, and he's been named BB King Entertainer of the Year twice for his efforts. The guitarist's dedication to Louisiana extends to the fight to save its wetlands through his conservation project Voice of the Wetlands. Lightnin Malcolm opens the show. $30, 9 p.m., Gruene Hall, 1281 Gruene Road, New Braunfels, (830) 606-1281, gruenehall.com. — DC