The Pumpkins show will be the inaugural concert at San Antonio's 3,200-seat Tech Port Arena. 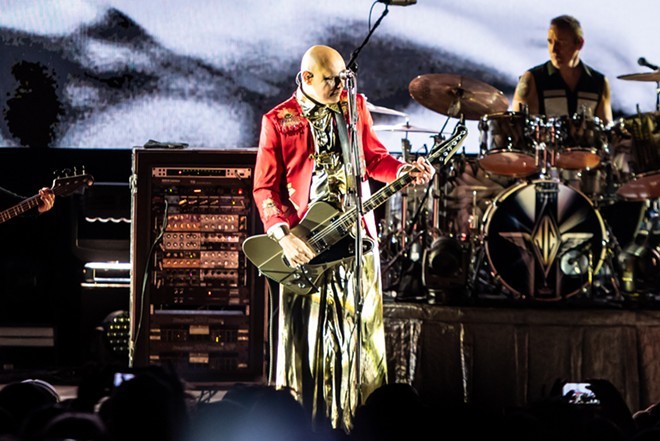 Jaime Monzon
The Smashing Pumpkins will inaugurate the new Tech Port Center Arena on May 2.

On Monday, May 2, San Antonio's 3,200-seat Tech Port Arena will make its debut with a performance by '90s rockers Smashing Pumpkins.

But that's not all Alamo City music fans have to celebrate over the coming week. The Wailers, true reggae royalty, will drop in for a gig, and a bevy of touring acts from the '80s through the 2000s rock underground are scheduled play shows.

Let's run down the wealth of options.

After a high-profile brush with fame in the amazing 2004 rock doc Dig!, the Brian Jonestown Massacre soldiers on with eccentric frontman Anton Newcombe at the lead. The band's discography is expansive, currently sitting at 19 LPs with two more due later this year. Its sound mixes anything from psych to shoegaze to dream pop to experimental, and the LPs sport some of the best titles in history, including Their Satanic Majesties' Second Request and Who Killed Sgt. Pepper? Get there early to see long-running indie-psych outfit Mercury Rev who open the show. $25, 8 p.m., Paper Tiger, 2410 N. St. Mary's St., papertigersatx.com. — Mike McMahan

If you're wondering whether we mean those Wailers — you know, the ones who backed reggae legend Bob Marley — yes, we do. Even though the group's primary claim to fame was supporting a true musical icon, its members have proven their talent and staying power. As evidence, the Wailers' latest release, One World, was nominated for a Grammy Award in 2021. Expect to spend an evening with reggae royalty. $35-$40, 9 p.m., Sam's Burger Joint, 330 E. Grayson St., (210) 223-2830, samsburgerjoint.com. — Enrique Bonilla

Fans of the original wave of U.S. hardcore punk have no excuse for missing this one — not even the fact that it's a sold-out show. (Scalpers suck, but sometimes you've just got to bite the bullet.) These three icons from punk's early '80s suburban uprising will ensure an evening of stagedives and circle pits at the Paper Tiger. Just watch out for the oldsters and pick 'em up when they fall. Don't want to risk any broken hips. Sold Out, 8 p.m., Paper Tiger, 2410 N. St. Mary's St., papertigersatx.com. — Sanford Nowlin

With a mix of simmering emotion, quirky songwriting and wide-open jamming reminiscent of Neil Young, Built to Spill emerged as one of the '90s most revered indie-rock acts. Still led by singer-guitarist Doug Martsch, the trio has matured over the years sound-wise, but at the core, Built to Spill is still about dressing wistful and reflexive songs with impressive instrumental interplay. $25, 8 p.m., Paper Tiger, 2410 N. St. Mary's St., papertigersatx.com. — Brianna Espinoza

San Jose, California native Snow Tha Product has been carving out her name in the rap world for 15 years, starting with early mixtapes that landed her a deal with Atlantic Records. Along the way, she parted with the label to operate independently and received a 2021 Latin Grammy nomination for Best Rap/Hip-Hop Song. Her next release is due to drop later this year, so expect to hear new material when she takes the stage in SA. $35, 8 p.m., Aztec Theatre, 104 N. St. Mary's St., (210) 812-4355, theaztectheatre.com — EB

Ever thought, "Gee, I really want to hear some rock music performed by a former WWE star?" If the answer is yes, have at it, just don't get close enough to the stage to wind up in a headlock. Fozzy arose from a collaboration between pro wrestler Chris Jericho — who, naturally, fronts the band — and Atlanta-based rap-metal act Stuck Mojo. Versatile guitarist John 5, whose resume includes work with Rob Zombie, Marilyn Manson, David Lee Roth and more, will open. $30-$32, 7 p.m., Vibes Underground, 1211 E. Houston St., (210) 255-3833, facebook.com/vibesunderground. — BE

Though they first hit the '80s scene as gothic post-punkers, Britain's The Cult made their biggest splash when they embraced an AC/DC-influenced hard rock sound on 1987's Electric, which produced the mega-hits "Love Removal Machine" and "Wild Flower." The band continued riding high on 1989's Sonic Temple — arguably a better record — which included the smash "Fire Woman." Still fronted by Jim Morrison-esque figure Ian Astbury and his introspective foil, guitarist Billy Duffy, the Cult dropped its most recent album Hidden City in 2016 but has been promising new music for a while. $55-$105, 8 p.m., Aztec Theatre, 104 N. St. Mary's St., (210) 812-4355, theaztectheatre.com. — MM

Iconic '90s rockers Smashing Pumpkins are finally resuming a series of road dates they started 11 days before the first big COVID lockdown of 2020. As a bonus, the group's San Antonio date will christen the city's newest live music venue, the 3,200-seat Tech Port Arena. So, what's the expectation music-wise? The Pumpkins' latest setlist is made up of songs from their 2020 release Cyr as well as a lot of early material the band hasn't played since the mid '90s, so expect some deep dives that may warrant seeking out a ticket on the secondary market. Sold Out, 6:30 p.m., Tech Port Arena, 3331 General Hudnell Drive, (210) 600-3699, techportcenter.com. — EB

One-man band Bob Log III's live schtick involves wearing a red, white and blue human-cannonball suit and helmet while singing through a telephone receiver and making a big racket with a slide and a resonator guitar. He does this while his feet keep the beat using a modified percussion set. Expect Delta blues put through a garage rock filter and layered with loads of camp. $12-$15, 8 p.m., Lonesome Rose, 2114 N. St. Mary's St., (210) 455-0233, thelonesomerose.com. — EB