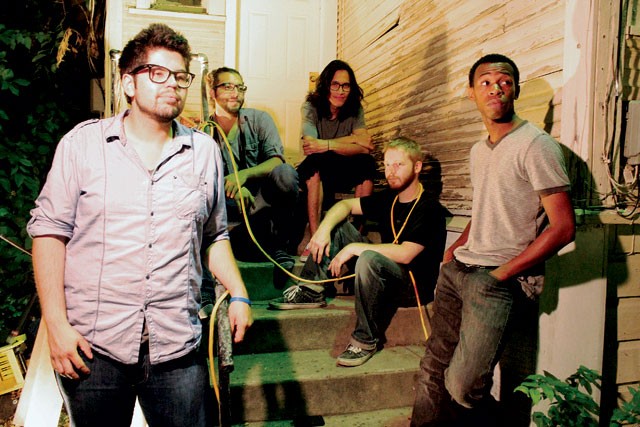 A remarkably cohesive whole with parts born in disparate locales, Last Nighters is a San Antonio band with a far more fully realized sound that you'd expect from a group that just released their debut album. Boasting a rousing and never wasteful or overdone album — Animal Room, released this summer and reviewed here — the band has a wildly emotive and irresistibly transfixing live show. A mix of sincerity, tight musical execution, and balls: the live incarnation of their twangy-jangly indie pop-rock crackles with youthful energy and surplus self-mastery.

"The band took our time honing in on our live sound and making sure that it works in conjunction with the way our recordings sound," says frontman Rob Fernández. "It took lots of time to figure out what we were going for, musically." It was a smart move that has paid great dividends for them and serves as a reminder to other new bands that starting a band and being a band are quite different things.

Last Nighters have a promising penchant for arresting, almost Americana feeling indie rock songs with pop essences. They also know how to use their strengths — especially, but not only, Fernández' thick and whiskeyed voice — to the fullest. All this, plus a live mojo that makes it hard to keep from gyrating when Fernández launches into the heady chorus on "The Borough," their most gigantic song: "When I see you, when I see you talk about me, I just wanna, I just wanna run away." Yeah dude, we're talking about you, but don't go anywhere — it's a good thing.