Meet DJ Quake, the Mix-maker for the San Antonio Spurs 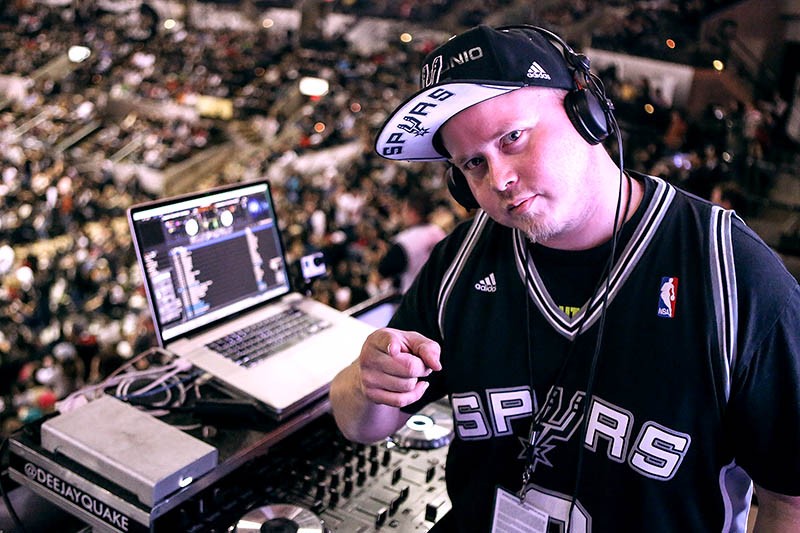 Perched beneath five NBA championship banners and surrounded by the rowdy fans known as Baseline Bums, DJ Quake, aka David Gamez, is putting in work. Draped in a black and silver Tony Parker jersey with matching Nikes, the San Antonio native bumps the carnival-flavored "Global Intro" he has crafted for International Night at the AT&T Center. A crowd of 18,000-plus cheers on as Tim Duncan takes the court, and armed with his trusty Pioneer DDJ-SX, an external hard drive and a laptop, DJ Quake is also ready for tip-off.

Despite playing in Memphis the night before in a tight victory against the Warriors, the Grizzlies take an early lead. As Tony Parker and Kawhi Leonard look on from the sidelines, San Antonio seems out of sync, and after a sloppy nine minutes, Quake gets his spotlight. Flanked by a pair of dancers from the Spurs hype team, he pumps in Don Omar's "Zumba" and encourages fans to tweet their international-themed requests. Within moments, the 29-year-old has a handful of requests, along with several new followers, and begins searching for songs on his laptop.

"My dad was in a band so of course I grew up around it," says Gamez, a South San High School graduate. "It started from there. I was a little kid dancing around listening to music all the time at different festivals over the years. I grew up with it so that's how I got into it."

By sixth grade, Gamez was part of a four-man DJ crew that included his father, his brother and another musically inclined friend. The crew based their names on the four elements, resulting in DJs Flair, Mist, Air and Earthquake. Eventually Gamez dropped the Earth, held onto the Quake and was on his way.

Inside the AT&T Center, the Spurs have found new life at the tail end of the third quarter, courtesy of their bench, sometimes referred to as the Foreign Legion. Sixth man Manu Ginobili has requested specific tracks by Mancha de Rolando and Los Fabulosos Cadillacs for tonight and Gamez wonders aloud if the music is helping Manu find his mojo. Almost on cue Ginobili sinks a three and the crowd erupts. Seconds later, Quake keeps the ritmo going with a remix of Enrique Iglesias' "Bailando."

When listing his influences, Gamez eschews the DJ Khaleds of the world, instead focusing on San Antonio names like DJs Los, Mystery, Chulo and Donnie Dee. After starting out on the club circuit, Gamez cut his teeth at the now defunct Power 106.7 where he handled the Friday night mix show, spinning two hours of hip-hop to kick off weekends. When he's not in the arena, he still works production for the Cox Media Group, along with "power mixing" sets at 151 Saloon on Friday and Saturday nights.

Back at the game, San Antonio is in the midst of a full-fledged comeback. Following a kinetic remix of Brazilian staple "Magalena," Quake laments the abundance of Sunshine State sound pirates Flo Rida and Pitbull, while acknowledging that they get a desired crowd response. When Danny Green nails a dagger to give San Antonio a three-point lead with 2.5 seconds left in regulation, he goes into what the game crew refers to as a "hot timeout." Pitbull's "Krazy" cascades off the thunderous applause.

"Clubs are a whole different animal than here," says Gamez. "Here you gotta be, obviously, family friendly. They give me a certain amount of time, maybe a minute and a half or so, to play something. So in that minute and a half I've got to think what's gonna get those people motivated. The game definitely affects what's gonna go on the music."

After three overtime periods, and a smooth "Coolie Suavemente" remix from Quake, the Spurs finally succumb to the Grizzlies 117-116. As fans exit the arena and Gamez shuts off his gear, the drone of Duran Duran's "Ordinary World" offers a fitting dirge. A few offer fist-bumps and ask for photos on their way out, and one fan requests an autograph.

"Music is always such a subjective part of an event, so it was initially received both good and bad," says Daniel Casados, Manager of Game Operations and Special Events for the Spurs, reflecting on the decision to add an in-house DJ last season.  "However, I think Spurs fans have taken to supporting DJ Quake so it's definitely a positive."