Metallica Sought And Destroyed The Alamodome 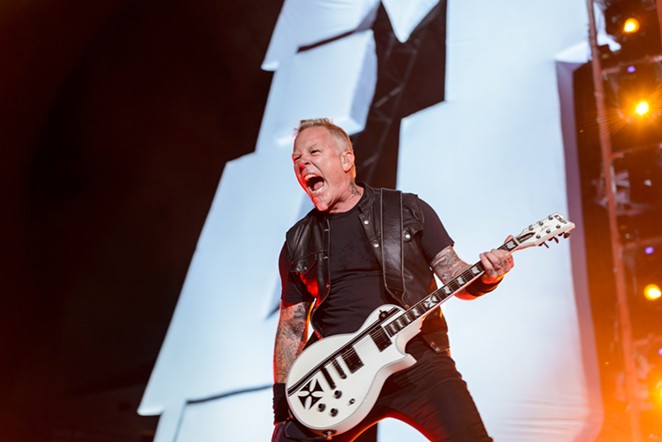 
Long before you could hear Metallica songs echoing through aisles at HEB during your Sunday afternoon shopping, metal was a socially disruptive and noisy genre that signified rebellion, a challenge to the status quo.

The genre still carries a similar spirit today, but Metallica were one of those pivotal early metal bands that pushed the genre into the mainstream and carved a path for other bands that would emerge with a similar sound. Wednesday night at The Alamodome, the band reminded us why by pummeling the Alamodome with quakes of lightning fast guitar riffs, literal explosions, and vocal melodies that we’ve kept close to our heart since the first time we heard James Hetfield sing them.


After Avenged Sevenfold's set and an hour intermission of the Beastie Boys’ Mix Master Mike spinning random nu-metal, the lights dimmed and Metallica took to the stage in front of a crowd that erupted when the band burst into

the title track off their new album Hardwired...To Self-Destruct.

Hetfield was charming throughout, thanking the crowd for supporting the band for so many years (aww, thanks James). Soon into the set, the band took it all the way back to 1984 by plunging into "For Whom The Bell Tolls." Swirling mosh pits started to open up across the floor like pools of sharks.


After the band played through “Halo on Fire”, Kirk Hammett and Rob Trujillo walked out onto the catwalk for a mini, drum-less version of “I Disappear." Then Hammett briefly exited and the audience fell to an emotional hush as a video of the late Cliff Burton rocking out in slow motion was projected behind Trujillo playing Burton’s epic bass solo from "(Anesthesia) Pulling Teeth."


Besides the seriously epic stage show, full of pyrotechnics, lasers and awesome visual projections, the band truly hit all the best parts of their catalog while sprinkling in some less popular new shit (which isn’t terrible, just not the classics).

The band eventually returned for an encore by slamming into “Fight Fire With Fire” as actual flames erupted on both sides of the stage. Before ending the night with "Enter Sandman" (duh), a video was projected onto the stage of Hetfield, in real time, showing a closeup of his guitar work. He was using a Texas flag guitar pick emblazoned with the Metallica logo.

Naturally, the crowd loved it.