Molotov Cocktail Party at the Korova 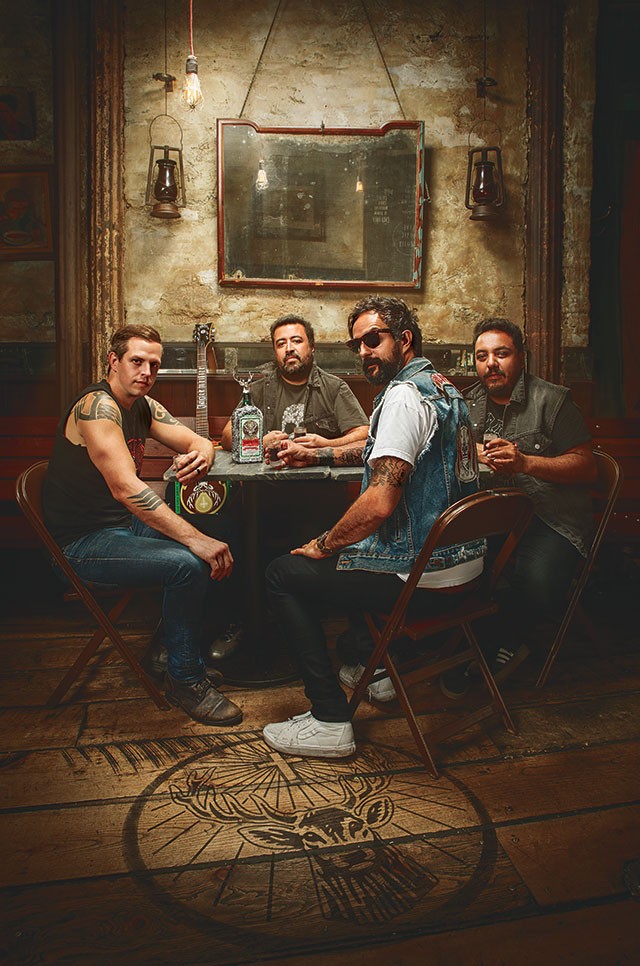 Courtesy photo
Randy (left), Micky, Tito and Paco, waiting to have a word with your daughter

The words are all the more provocative if you consider one of the singers, drummer Randy “The Crazy Gringo” Ebright, was born and raised in Michigan.

In 1992, a 14-year-old Ebright moved to Mexico City following his father, a DEA agent who spent three years there. When his dad got transferred back to the States, Ebright decided to stay. He joined Molotov in 1995 after high school, with Tito Fuentes (guitar, vocals) and Micky Huidobro (bass, vocals). Paco Ayala (guitar, drums, vocals) would join them later.

“[My dad] wasn’t too happy with me staying in Mexico,” Ebright told the Current on the phone from Mexico City. “Obviously, he saw the darker side by being in the line of work that he was, but I stayed out of any serious trouble. He’s now proud of me, but at first it was rough for him.”

“Frijolero,” included in 2003’s Dance and Dense Denso, was Molotov’s latest aural attack, and arguably its most lethal. No small feat for a band that became famous before its music was even heard. The cover of their 1997 debut, ¿Dónde Jugarán las Niñas? (“Where will the little girls play?”), showed a young teenage school girl in the back seat of a car, her legs up in the air and her panties by her knees. The album, which included explicit titles like “Puto” (“Fag”) and “Chinga tu Madre” (“Fuck Off”), was named as a lusty joke alluding to Mexican rock band Maná’s 1994 environmental mega-seller ¿Dónde Jugarán los Niños? (“Where Will the Children Play?”), and it was immediately boycotted by some of Mexico City’s largest record and department stores. So the band, which had signed to producer Gustavo Santaolalla’s Surco label and were distributed by Universal, sold the record on the streets. The boycotts backfired: to date, Molotov’s albums (a mix of hard rock, metal, rap, Latin rhythms and sharp, humorous bilingual lyrics about sex, politics and social commentary) earned four Latin Grammys and sold almost four million copies worldwide.

“Yes, somebody is rich out there somewhere,” said Ebright.

In 2007, the band suddenly “quit” and released four individual solo albums. The solo EPs were real, but the dissolution was a hoax.

“There was no separation and we won’t separate,” said Ebright, whose says he raps in English but “dreams in Spanish.” “That was bullshit, us fucking around because the media is full of chismes, so we gave them chismes. But we have enough new material for two new albums. There’s going to be

Molotov for a while. We are just kind of waiting for the red tape, the whole politics of the record business, to be able to release them.”

The first of those albums should come out as early as November or as late as March 2014. They’ll include songs like “Crazy Chola Loca,” “Goner,” and “La Necesidad es Cabrona” (“necessity is a bitch”), which has a line that says “No me llamo Johnny Cash/porque yo ni cash tengo” (meaning “My name is not Johnny Cash/because I don’t even have cash.”)

I asked him about whether they’ll include Latin sounds as they did in songs like “Voto Latino” and “Frijolero.”

“The Latino stuff is in our blood, but we’re not going to do a salsa song, if that’s what you’re asking,” he said.

The band is going through a sort of renaissance, and will play at the Korova on Tuesday after “cleaning the house” and co-managing themselves with a team of friends.

“We got rid of a lot of the old dinosaur bones that were holding the band down,” Ebright said.

“The band is undoubtedly very excited to be sharing the stage with them,” said Álvaro del Norte, Piñata Protest’s singer/accordionist. “We’ve been compared to them a number of times and, although we’re quite different in our sounds, there are certainly parallels: both bands play diverse musical styles, we both do the blending of genres, sing bilingually, and of course there’s the tongue-in-cheek attitude. I’m not too sure what to expect from this show but I’m certain it’ll be a wild one.”

It’ll be wild, alright, especially considering the Jägermeister sponsorship (Molotov is the first Latino band to headline the tour). At least in the early days, the Molotov members were notorious party animals and, even though Ebright feels more “mature,” things could easily get out of hand on Tuesday.

“You may want to do before-and-after pictures,” said Ebright. “We might be getting a little looped here. I’m nervous about all the alcohol, but we’ll see.”