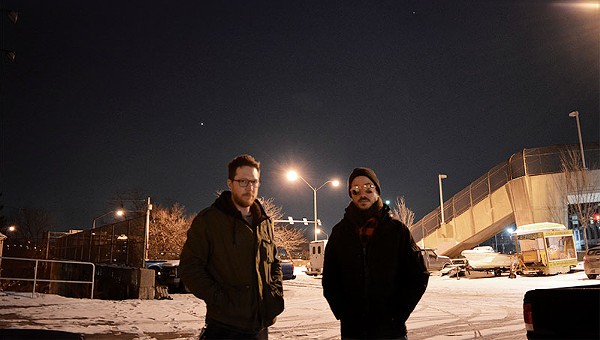 As any good VHS gore-hound can tell you, Zombi is the European title for George A. Romero's Dawn of The Dead, an iconic undead flick that produced a series of sensuously gruesome Italian not-quite-sequels borrowing the same name. Besides gifting the world with zombie-on-shark duels and helicopter decapitations, they all featured some of the best horror soundtracks ever produced. Composers like Cladio Simonetti and Fabio Frizzi warped the prog/fusion trends of the day to produce a virtuosic music that deepens the dread between death scenes as capably as it amps up the inevitable Tom Savini splatter-fests. And while Simonetti's band Goblin has itself been reanimated in recent years to perform these scores live, it's the Pittsburgh duo Zombi that has carried the rotting-flesh flag for this music since forming in Romero's hometown of Pittsburgh in 2001.

Comprised of bassist Steve Moore and drummer A.E. Paterra (both shoulder synthesizer duties as well), the band grew out of Steel City's post-punk scene and is largely responsible for renewing interest in slasher movie soundtracks and analog synths among the basement-show set. The band went into semi-inactive status in 2011, punctuated by a dream tour opening for Goblin in 2013; this year, there's a new record (Space Shift) and a headlining tour, capped off by their performance on Sunday at Housecore.

Zombi's music is hard, in several senses. It is definitely hard to play. Moore and Paterra manage several synthesizers simultaneously, building spires of arpeggios on top of their Rush-worthy rhythm work. It's also hard-sounding music, almost tactile in its toughness and lean in its precision, like the chrome guts of a Maserati engine. You might be speeding toward an anthropophagic death while a Zombi record plays, but you're going to feel like a badass getting there.

I spoke with Paterra during an appropriately dark and stormy night a few weekends ago, where our conversation ranged from Zombi's resurrection as a touring band, their inaugural visit to SA, and a neglected Texas neo-prog touchstone.

Housecore's been asking for a number of years, so now it's made sense with having a new record out and wanting to do some more touring. It worked out perfectly with our schedule. We actually play the last show of our tour in Pittsburgh and fly in to San Antonio the next day.

What's amazing is that Housecore was able to source us a Korg Poly-6 and a Sequential Circuits Prophet 600. That's always the thing that's difficult for us to want to do fly-ins, because for drums, I don't like playing other kits, but it's not that difficult. Same with playing through a different bass cab or whatever. That stuff is pretty interchangeable. But the two synthesizers are the workhorses of our set. We were going to adapt our set with cheaper, lighter, more transportable synthesizers, but from what Steve told me things just weren't sounding as good.

[Pinkish Black] opened the shows for Goblin when Steve was playing keyboards. He became friends with them and then I think Steve was the one that talked to Relapse about them. So when we were planning a tour he was like "yeah, those guys would be great to have out with us—another two-piece, on the same label."

Also, I was a fan of the band Yeti that [Pinkish Black drummer] Jon Teague played in. The only music I ever heard was online somehow and I just remember it was one of those moments where I was like "Holy shit, there are other bands that are kinda contemporaries of ours that kinda like prog!" I'm aware that there was an unfortunate death in the band [bassist Tommy Atkinson took his own life in 2010], so that was it for that. But that was a really cool band.

On Zombi's Return To Live Performance

With Goblin, that was probably the best audience we could have played for. The perfect storm of people was there. After this tour, we're curious to see what happens, because we haven't toured in the longest time. We haven't headlined a tour in the longest time — I think the last time we might've done that was 2007 or 2008. I'm curious to see what happens on this tour. We're playing some smaller rooms, smaller sound systems. It's certainly not on the level that we did with Goblin. But that's how we were doing it years ago, so hopefully we still have the gusto to get through those kind of shows. I'm just looking forward to it to see what we can do on our own.

Zombi will be performing at 8pm on Sunday, November 15 at The Aztec Theatre for the third annual Housecore Horror Festival.