All three bands barreled through tunes dating all the way back to their beginnings — and the audience clearly enjoyed the ride. 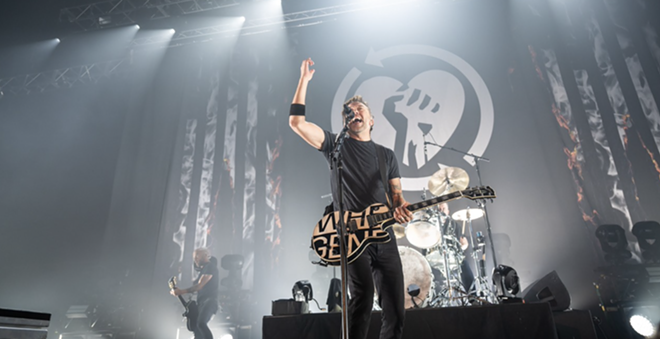 Jaime Monzon
Rise Against takes the stage at San Antonio’s Tech Port Center + Arena.
For photos of the show, check out the Current's slideshow of the event.

Rise Against, the Used and Senses Fail played San Antonio's Tech Port Center + Arena on Tuesday — and we've never booed so much in our lives.

No, not because the bands sucked. Far from it. We did so because the Used's vocalist, Bert McCracken, insisted on hearing “boos for the Used” throughout his  band's set. And they continued anytime Chicago-based headliners Rise Against gave the Used a shoutout.

The boos set a perfect example of the self-deprecating — but fun — energy that can only be found at a packed punk rock show.

All three bands barreled through tunes dating all the way back to their beginnings. Given that they've all been around for two decades or more, that left a vast repertoire to choose from. Clearly, the enthusiastic audience was ready to lap up those tunes, regardless of their vintage.

“This crowd is absolutely incredible,” the Used's McCracken said before the band broke into its 2005 single “I Caught Fire.” “Like me, a lot of you probably struggle with depression, but I’m here to tell you everything is gonna be OK. Just put some music in your ears.”

McCracken peppered the Used’s set with Shakespeare soliloquies — the first time many in the audience had probably heard that term since high school English. He waxed poetic with lines from Macbeth and Hamlet as the rest of the band played on. The Used ended their set with what may have been the most punk mashup ever played at the newish venue, marrying Nirvana’s “Smells Like Teen Spirit” with “A Box Full of Sharp Objects” from its own debut album.

As the audience at Tech Port Arena waited for headliner Rise Against to take the stage, it was difficult not to marvel at the ingenuity of the venue’s design. Beneath massive LED screen backdrops, a passage opened into the backstage area. Crews quickly rearranged lighting and band equipment, making for a swift transition to the Chicago-based group's opening songs.

Influenced by the angry power of hardcore groups such as Minor Threat and the more melodic punk of bands including Bad Religion and Pennywise, Rise Against's musical formula finds room both for frantic energy and memorable melodic turns. Its lyrical focus on topical themes, including politics, has also helped it remain relevant. Singer-guitarist Tim McIlrath spoke of the war in Ukraine before breaking into acoustic number “Hero of War” from the band’s fifth album, Appeal to Reason. 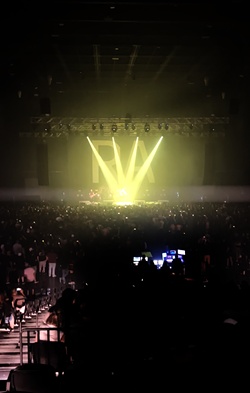 Nina Rangel
Rise Against performs "Hero of War."
The crowd showed its elation not just as Rise Against played favorites including “Help Is on the Way” and “Satellite” but other less familiar material. The audience packed the expansive floor level as well as the upper VIP areas.

Unlike the last Tech Port show the Current  reviewed — the arena's opening night Smashing Pumpkins concert — folks in the balcony hung over the glass barriers, clambering to get as close as they could to each of the acts. Tuesday’s GA section spanned the entire footprint of the arena floor — a stark contrast to the orderly, seated setup when Billy Corgan and crew took the stage back in May.

The lighting rigs also were completely different — and decidedly more impressive — at Tuesday’s show, and the floor's open layout showed how the venue could accommodate a variety of configurations. The sound was consistently clear as a bell, and though the parking situation outside remains a headache, Tech Port still boasts that new arena smell.

Rise Against's triumphant performance suggests San Antonio music fans have embraced the city's newest venue and are likely to continue seeking out shows there. Future performances include a Saturday, Sept. 3 gig by Modest Mouse and a sold-out Wednesday, Sept. 21 engagement featuring I Prevail and Pierce the Veil.