Shea Serrano's Twitter page is the only reason I continue to visit and haphazardly post on the platform. A quick highlight from last week: "wife is at yoga that means i'm watching the boys that means we're listening to System of a Down v loud & breaking things being a dad is easy."

Thankfully, Serrano also employs his humor and knowledge of hip-hop, the Spurs and fatherhood in a medium that allows for more than 140 characters. A native of Southwest San Antonio, Serrano's digestible and insightful writing has found a natural home among the pop-culture freaks at Grantland.

After the success of his coloring book collab with Houston legend Bun B, Serrano returns to print this week with a new project on Abrams Image press. From the Sugarhill Gang to Young Thug, The Rap Year Book breaks down the most important hip-hop songs from 1979 to 2014. The choices for each year are determined by pivotal changes in style, the birth of a movement or general excellence. Sometimes the most important song and the best song overlap — "Paid in Full" in 1987, "Monster" in 2010 — and sometimes they don't — which explains Macklemore's inclusion in a book about the rap canon for 2012's "Same Love."

Over the years, Serrano gracefully elucidates how hip-hop has built upon itself and developed its core themes. In 1997, Puff Daddy introduces "the most opulent era of rap to date." In 2006, Rick Ross "marks the origination of rap that became more about imagination and the luxuriance of what was being said rather than the authenticity of it." In 2011, Kanye West and Jay-Z "reported the mental lashing that came with being a wealthy black male in a high society that was better equipped at ignoring wealthy black men than understanding them."

Many conversations about the canon of anything can become very boring and very white-male-speak very quickly. Serrano's achievement is keeping such perceptive material so light and funny. A delight to read through, The Rap Year Book features 150 color illustrations by Dallas illustrator Arturo Torres, adding to the brisk pace of Serrano's humor.

Over the phone, we caught up with Serrano about his work, voting for Kanye, "Jazzy Sensations" and his very hip-hop inspiration for writing The Rap Year Book. 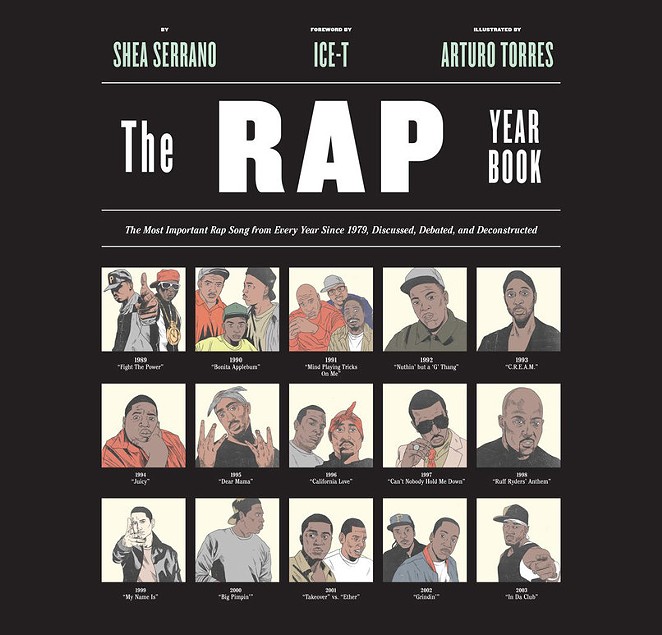 How did The Rap Year Book come about?
[The publisher] pitched me the idea about the most important rap songs from every year. When she did, I thought 'this sounds super fucking boring. I don't want to do this at all. I'm not interested in reading about a song from 1984, who cares? Who cares why it's important or if it's even important?' So I said 'I don't know if I want to do that.' We sort of went our different ways for awhile. Then a thing happened with my family when we wanted to move into a house and I needed a big block of money and I needed it quick so I said 'I guess I'm gonna do this book now.'

As I started working on it and putting art in there and fleshing out the ideas, then it became a thing I was interested in and wanted to do. That's how we ended up here.

I could see an individual year maybe being boring but when you put them all together — because hip-hop reflects and comments on culture so much — that becomes a remarkable way to look at the past 30 years in America.
Yeah, I wasn't looking at it like that at all. I was just thinking, 'I have to listen to "Jazzy Sensations?" I have to research "Jazzy Sensations?"' No, thank you.

I've never been able to explain Young Thug and the weird Atlanta stuff to people who like hip-hop but don't get it. How do you explain its importance?
The main criticism that people are gonna throw at a Young Thug or Fetty Wap or Rich Homie Quan, or even Future, they're always like [dumb guy voice]: 'Oh, it's not real hip-hop, they're not lyricists.' With those types of guys, it's never about what they're saying, it's about how they're saying it, how they're presenting it. These grunts and these warbles and these squeaks and these yelps, that's the new thing in rap. That's the evolution. That's the next step hip-hop is taking.

What do you think the Spurs record is gonna be this year?
82-0 in the regular season. 16-0 in the playoffs.