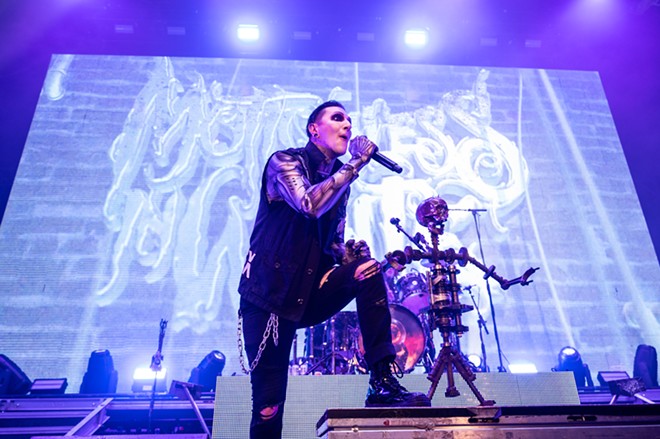 Jaime Monzon
Motionless In White dressed the part for robotic world domination.
Be sure and check out the Current's photo gallery of the concert.

October ended more than a month ago, but it’s easy to forgive anyone who stepped into San Antonio’s Tech Port + Arena Saturday evening for thinking the spooky season was still upon us.

That’s because third iteration of the Trinity of Terror Tour transformed the venue into a horror-filled metalcore showcase. The advertised trinity of bands — Black Veil Brides, Motionless In White and Ice Nine Kills — along with opener Atreyu each brought their own shade of black to the sold-out show.

While Motionless in White and Ice Nine Kills delivered the night’s high points, Black Veil Brides and Atreyu still served their purpose on the package tour — think of them as the endpieces that made the darkest loaf of pumpernickel whole.

Veteran metalcore outfit Atreyu started things off by busting out the old tracks that put it on the map. Although they didn't fit quite fit the horror-drenched theme of the rest of the bill, the guys in Atreyu still harnessed the kind of teenage angst that makes the three top-billed acts popular. Lately, Atreyu has leaned into a modern metal sound and even includes rap in a few songs — and unlike the rest of the bands on the bill, it kept its set design simple.

Running off a cyber-metal theme these days, Motionless In White dressed the part for robotic world domination. To enhance the experience, the band’s set included adjunct performers who ran through myriad props and costume changes. One moment, they wielded chainsaws that showered sparks, and another, they tossed Halloween candy into the crowd. During the single "Voices," MIW beamed a rainbow of lights and the pride flag to make it clear the band members are LGBTQ+ allies.

During its set, MIW shifted effortlessly between material that relied on electronic beats and songs that took a more conventional screaming metalcore approach. Whether that was a good thing, of course, depends on your taste for electronic backing tracks. 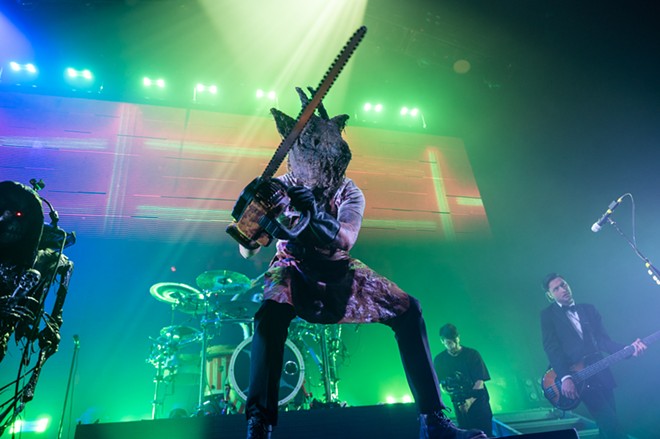 The antics were backed up by a soundtrack of songs that got the heart pumping. The onstage gore took the audience back to the days of Alice Cooper and other shock rockers who paved the way with blood and severed heads. Regardless of what audience members felt about INK’s creepy, heavy music, the stage show alone was enough to appease any horror movie buff.

Following a pair of bands with such carefully crafted shows, Black Veil Brides felt a bit lackluster. BVB did get an assist from a sweeping violinist for one song, but the rest of the set relied heavily on a formula of catchy chants and nostalgic tunes. Compared to the rest of the acts, BVB’s sound also seemed jumbled, leaving the audience a little deaf and drowning under the sound of the blasting snare drum. One could argue this meant the band performed a true-to-sound set, but for the most part, it just felt sloppy.

Even so, plenty of emo elders and newly indoctrinated teens sang their black hearts out to "Knives and Pens" and "In the End." For those involved in the scene back when BVB was at its peak, it probably made perfect sense for the band to be on this tour.

If only BVB had brought back the black eyeliner for this run. Now, that would have been the icing on the blood-soaked cake. 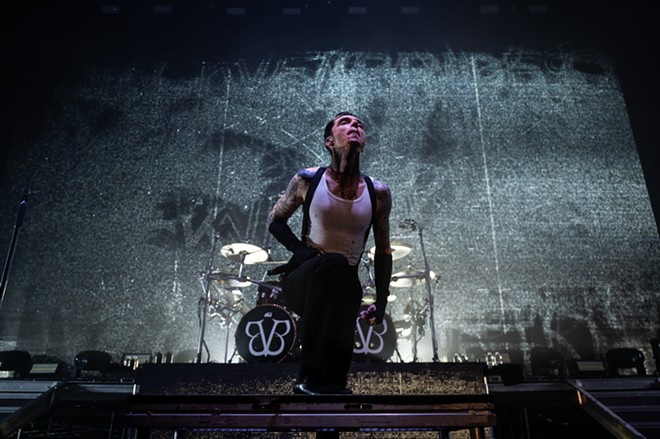 Jaime Monzon
Black Veil Brides had the crowd singing along to the hits.
Coming soon: SA Current Daily newsletter. We’ll send you a handful of interesting San Antonio stories every morning. Subscribe now to not miss a thing.