Texas Observer / Ivan Armando Flores
San Antonio: Eva Ybarra, the Accordion Queen, poses for a portrait. After years without broad recognition, she is finally getting her due.
Eva Ybarra plays her accordion with such passion that it can feel like fury. Smashing the instrument’s buttons and stretching her arms out wide, then quickly contracting, Ybarra bends air to produce rich vibrations of sound. One of her original ballads, “El Eco De Mi Voz,” is a booming, dramatic affair: When she starts to sing, in her low, thunderous belt, the music is all the more powerful. Sometimes, she weeps as she plays. She’s mostly been practicing in her apartment since the pandemic began; here, the sound blossoms against the walls. “The neighbors like it,” she laughs. Perhaps they dance to Ybarra’s songs in their living rooms.

Known as La Reina del Acordeón, or the “Queen of the Accordion,” Eva Ybarra was named the 2022 Texas State Musician in May. She is widely considered the best female accordionist playing in Texas today—a title she increasingly resents. Why not just one of the best accordionists, period? A longtime leader of her band, Eva Ybarra Y Su Conjunto, she has been carrying around her instrument since she was 4 years old, started performing in restaurants at the age of 6, and scored her first record deal when she was 14. Yet despite her lengthy and critically acclaimed career, Ybarra says she has spent decades overlooked and alienated within a male-dominated genre.

While Ybarra has been adored by critics for years, she has historically been snubbed by recording studios, festivals, and venues, often shut out of the San Antonio music scene and broadly unrecognized outside the city. More recently, formal awards have been flooding in: In 2017, she was a National Heritage Fellow through the National Endowment for the Arts. She has been inducted into several Tejano music halls of fame and included in museum exhibits. Yet this has all come later in her life, and her most recent honor comes through with no money or work attached. “It’s been a hard, long road,” she says. “It’s been very difficult to make my living.” 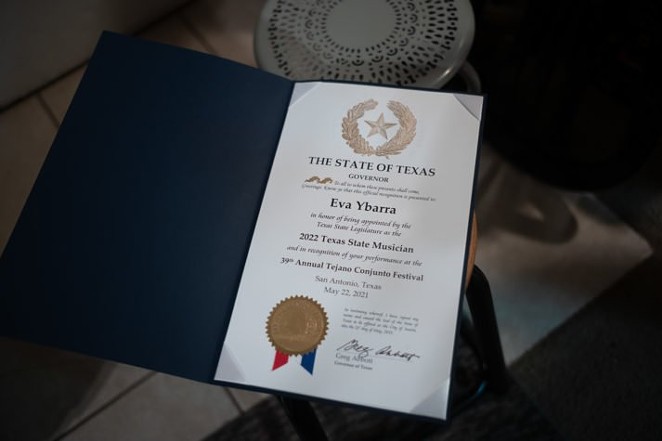 One of nine children, Ybarra was raised in a musical family on San Antonio’s West Side. She asked her parents for an accordion after hearing her older brother play, then taught herself by following along to the most popular hits of the day. Her siblings still join her to make music: Her brother David Ybarra played in her ensemble for decades, and her sister has written gospel songs for them to perform. As a child performer, she dressed in homemade cowgirl outfits and stood on beer crates to reach the microphone; the San Antonio Express-News has described her in those days as a “conjunto Shirley Temple.”

The conjunto genre, rooted in the Texas-Mexico borderlands, was born in the late 19th century. Historians debate whether Tejanos were introduced to the accordion by way of the north, by German, Polish, and Czech immigrants who brought the instrument to central and South Texas, or from the south, through Monterrey, Mexico, where salon music and dances characterized by Italian opera singing and Czech polkas were surging in popularity. According to Tejano music scholar Manuel Peña, from the moment of the accordion’s arrival in Texas, it became part of the folk music of working-class Mexican Americans. Conjunto bands, inspired by the button accordion and the bajo sexto, came together to play on festive occasions and in Mexican American dance halls. 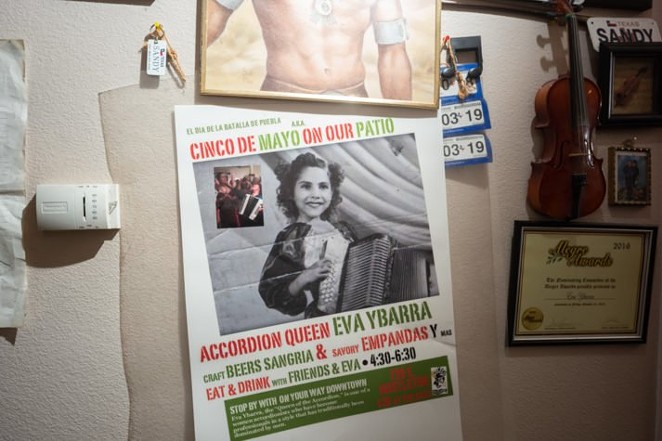 Ybarra’s mother discouraged her from taking up the accordion, correctly intuiting that it would anger male accordionists, who generally dominate conjunto music. This path hasn’t always been safe, Ybarra says. She tells stories of how men, jealous and offended, regularly threatened her at gigs, followed her, and cornered her after shows. Once, when she was invited to perform in Puerto Rico in her twenties, her mother forbade her from going. She felt her daughter’s success could grow to be dangerous. “I’m your daughter, but I belong to the people,” Ybarra replied. She made the trip to Puerto Rico, but when she got there, Ybarra says she was assaulted by the hotel manager who came to her room and tried to rape her. Finally, he let her go. Ybarra also spoke of “killings, shootings, free-for-alls” she experienced playing in cantinas and dance halls. “My parents never knew… I never told them, because I loved music and didn’t want them to tell me to stop.”

Ybarra is emphatic about sharing, rather than silencing, these stories. For her, it’s a passing down of knowledge, a warning about how the world is. “I don’t hide nothing,” she says. “I wanted my story out there, so young ladies can take care of themselves.”

The main story that her bandmates and her family tell is this: Ybarra is a brilliant figure, and she has been criminally overlooked. A true virtuoso of her craft, she writes original lyrics, especially for corridos, or ballads, but toying with instrumentation is her true modus operandi. The accordionist is not unlike a jazz musician; Improvisation is part of the performance. She’s experimental, often playing in a progressive style. Ybarra plays fourteen instruments total, including bajo sexto, the 12-string Mexican guitar that accompanies the accordion in conjunto music; piano; violin; and electric bass. She is also a force on the guitarrón when she performs in mariachi bands, even though the big guitar threatens to eclipse her, as she stands just above 5 feet tall. 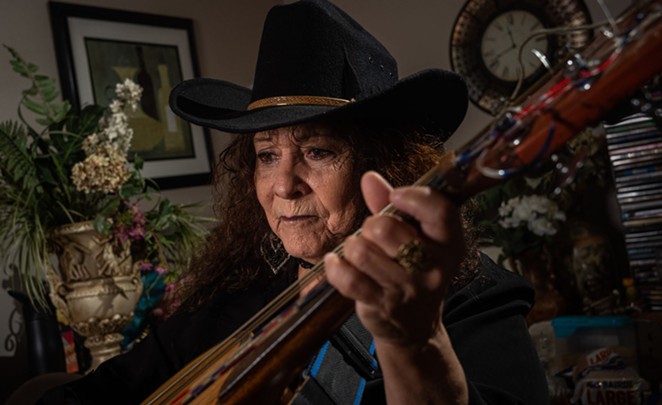 Despite the recent spike in recognition, the queen of the accordion is one of those brilliant artists with profound talent who is just scraping by. While some states offer strong grant funding for recognized folk artists, Texas arts funding has long been dismal. Ybarra still plays mariachi at San Antonio restaurants for tips, and her house was foreclosed upon in 2015.

If Ybarra doesn’t get the glory, or the economic stability, that the most successful men in conjunto have, maybe future generations of female conjunto musicians will. She already has disciples, such as Iliana Vasquez, an apprentice of Ybarra who plays accordion and bajo sexto. “She’s leaving me her legacy,” Vasquez says. “Her knowledge is gold, it’s precious and it’s priceless.” Vasquez, who hopes to learn to teach this music herself, says recently more conjunto education programs have been introduced in the Rio Grande Valley, where she lives.

The queen has no plans to stop performing, either. “I will never give up until God takes me with him,” she declares. “Upstairs, I’m going to play there too. I’m going to ask God, I still want to play.”