Seven San Antonio Tribute Shows to Look Out for This Summer 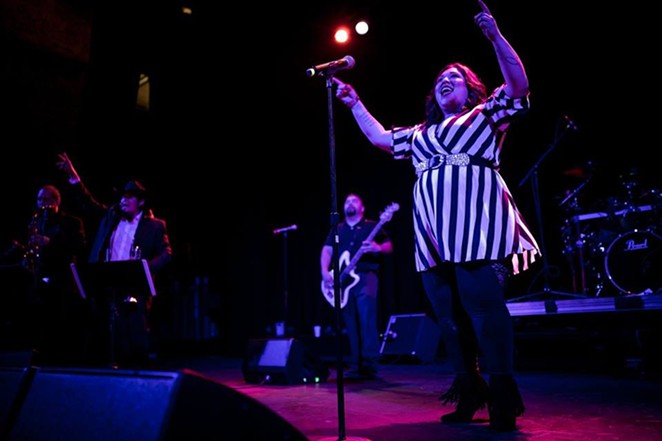 https://www.facebook.com/bidibidibanda/timeline
This Thursday will see the return of Selena tribute, Bidi Bidi Banda, to San Antonio's Paper Tiger. Boasting a group of Austin's premier Latin musicians, Bidi Bidi Banda is the "refried" dream of vocalist Stephanie Bergara. The event, consisting of everyone's favorite Selena jams and Modelo specials all night, will have all the fixins for a drunken cumbia of a good time. In the true spirit of teleporting back to a better time to dance the night away, the Current has compiled a list of seven other tribute shows to add to your calendar this summer.


This balls to the wall AC/DC tribute band cranks out all the best beer-guzzlin' anthems from both Bon Scott and Brian Johnson's respective catalogues. Led by Mike Mroz (Angus Young) and Darren Caperna (Scott and Johnson), Back in Black channels the heavy metal energy of AC/DC right down to the schoolboy uniforms and messenger hats. Check them out next month when they bring their raspy vocals, power chords, and duck walks to the Aztec Theatre. For a 10 dollar ticket, this show is a steal, considering AC/DC's current Axl Rose-led tour might as well just be an overpriced tribute show.

Speaking of Axl Rose, his spitting image will be taking the stage this week at Papa Woody's Roadhouse for the Ultimate GNR Tribute Experience. Well, maybe it's not quite his spitting image anymore. Guns 4 Roses brings back the classic Appetite for Destruction Guns N' Roses lineup including Izzy Axl?, Izzy Slash?, Izzy Izzy?, Izzy Dizzy?, and so on (you get the point). It has been selected as the World's Greatest Guns N' Roses Tribute Band by AXS TV, so it must be at least as good as another popular GNR tribute. The concert on Friday will feature an opening set by Aerosmith tribute band Walk This Way. Rock on, my dudes.

Vic Vaga, otherwise known as the VagaBlonde, is that one in ten thousand tribute act. What started as a Halloween joke has blossomed beautifully into one of the most captivating Rod Stewart tribute shows of our time. Vic doesn't just settle for the bare minimum of singing the hits with razor-like precision. With the VagaBlonde, audiences get the proper Rod Stewart package: the nose, the hair, and the designer outfits that pop in ways you never knew were possible until they assaulted your own two eyes. Vaga is bringing his Vegas-caliber act to San Antonio this Saturday for the "Young Hearts Be Free Tonight" Summer Retro Bash in Central Catholic's gymnasium. The $35 dollar ticket includes dinner and two drink tickets and will benefit the high school's scholarship funds. Take it from a Central grad, there is no better place in San Antonio to catch a show than the Buttons' own Snakepit.

For San Antonians who lean more toward the prog rock spectrum of tribute show taste, Third Eye is the answer. Since 2008, Third Eye has worked to bring the best possible Tool and A Perfect Circle experiences. Saturday, June 25, will officially be Third Eye's biggest headlining show to date when they play the Aztec Theatre. The concert will feature opening sets from System of a Down tribute DeViLpee and Deftones tribute Bloody Cape. Pick out your best black shirt and favorite black pants and go show some support for these San Antonio-bred musicians.

For the love of god, don't ever stop believing in the power of Journey's beloved discography. San Antonio (SA) Lights, two-time winner of the best tribute band in San Antonio award, certainly hasn't. This Journey tribute band puts a San Antonio twist on their performances, banging out Journey's hits in both English and Spanish. Since gaining some steady momentum, SA Lights has taken their San Antonio show on the road to other Texas cities including Eagle Pass, Corpus Christi, and Lockhart. Their next show in town will be on Saturday, July 16 at Hooligan's Bar & Grill.

Bricks in the Wall

End your summer with the longest performing Pink Floyd tribute act in the nation. Bricks in the Wall is a nine-piece band that recreates the live Pink Floyd experience with startling accuracy. In addition to the musical prowess of its band members, the Bricks in the Wall show gloats a stunning visual display. The visual part of the show contains a gigantic circular video screen, state-of-the-art video and light effects, and even a laser light show operated by one of Roger Waters' tour engineers. This concert is sure to please Floyd diehards and newcomers alike.

Hispanic Elvis is a favorite member of the San Antonio family. On any given day, he can be spotted strutting around market square where he dances, poses for pictures, and plays the shit out of his trusty plastic guitar. What Hispanic Elvis lacks in actual musical ability, he more than makes up for in pelvic gyrations and sheer enthusiasm. While he never asks for money in return for his performances, it won't hurt you to throw the little guy a buck or two. We may never truly know the enigma that is Hispanic Elvis, but we should all be thankful for his gift to us nonetheless and hope we one day enjoy anything as much as he enjoys resurrecting the King.