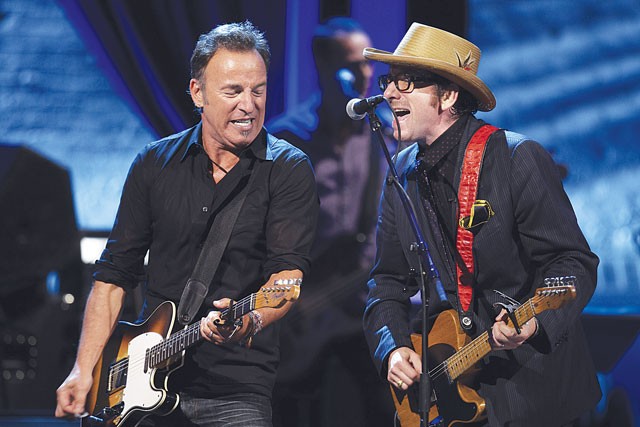 Courtesy photo
The Boss and the Host rockin’ it out on Spectacle.

After a few seconds of a Hammond-driven version of U2’s “Mysterious Ways,” Elvis Costello puts his guitar down, grabs the microphone, and, while the band keeps playing the song, transforms himself into Spectacle’s master of ceremonies. He’s equal parts preacher, rapper, and circus ringmaster.

“Long ago, my friends, giants and monsters walked the Earth,” he yells loudly, delivering each line in sync with the band’s backbeat. “There were Beatles, there were Stones, the Who, the Where, the Why, and a Zeppelin of Led, and the faithful worshipped at their feet. But in time giants grow old. And the people asked, ‘Who shall join their company? Who shall climb up and take their place on the mountain?’ Four lads pushed their way to the top of the mountain and said, ‘Let us try to go up the mountain.’ And the wise among us laughed, ‘Ha!’”

Costello then jumps to the song’s “It’s alright, it’s alright” chorus, but before the “she moves” part, he goes right back to the intro.

Between 2008 and 2010, the two seasons and 20 episodes of Spectacle: Elvis Costello With… (co-produced by Elton John, who was the guest on the first show) was the smartest music show on TV, but chances are you missed it unless your cable company carried the Sundance channel or you are a frequent YouTube surfer. With the release of the show’s complete second — and, as of today, last — season on DVD, you can now discover this gem and even see extras that were not shown on TV. According to the show’s publicists, there won’t be a Season Three (Season One was released on DVD in 2009).

Spectacle was unpredictable, but it usually began with Costello performing his own version of a song by the show’s guest, followed by a hilarious and informative guest introduction, a smart conversation, a song by the guest, and a duet. Despite the notoriety of the guests (besides Elton John, Season One featured, among others, Lou Reed, Rufus Wainwright, James Taylor, the Police, Tony Bennett, and even former President Bill Clinton) this wasn’t a star-driven show — the songs themselves, and the things that triggered the artists to write those songs, are the real stars of the show.

“My wanting to sing and play came from being a fan,” Lyle Lovett told Costello, who always found a way to ask simple questions in ways that made the guest dig deeper. “Lucinda Williams, Guy Clark, Townes Van Zandt … just the great thinking that exists in their songs made me want to try to write something. … They taught me songs could have a narrative quality, that you could paint these wonderful pictures and find yourself inside these stories, living in the song. That’s a very powerful thing.”

Highlights within the consistently gorgeous sound and images of Season Two include Bruce Springsteen and Costello’s funny (and ultimately failed) attempt at Roy Orbison’s “Oh, Pretty Woman,” an exhilarating version of U2’s “Stuck In A Moment You Can’t Get Out Of” (by Costello, Bono, and The Edge), a not-seen-on-TV bonus version of Costello’s epic “I Want You,” and Ray LaMontagne’s accurate description of the art of creation.

“Writing is such a strange thing,” LaMontagne tells Costello, speaking on songs’ elusiveness in creation. “Oh, they’re tricky, they’re so tricky. … Those little sons of bitches.” •