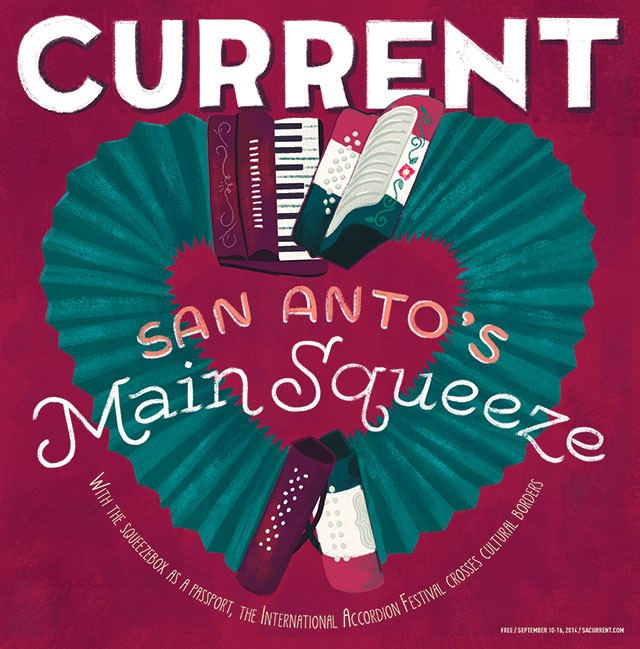 On its own merit, the accordion is a curious combination of sound creation: the platypus, the Frankenstein monster of musical instruments. On its right side lie a couple octaves grafted from the piano, teasing out the melody. On the left, a series of buttons pre-ordained with chords grounds the harmony and rhythm. In the middle, the bellows, the instrument’s fan-shaped pulmonary system, wheeze in and out, blowing air through the reeds to create sound, not unlike a saxophone.

But in context, this 19th-century German invention has helped breathe life into folk music throughout the world. Spin a globe, randomly stop it with your finger and there’s a good chance that the accordion has become a part of that nation’s folk tradition.

“There’s a reason for that,” says Catherine Ragland, International Accordion Festival curator and ethnomusicology professor at the University of North Texas. “It’s an instrument that’s easily accessible and fairly easy to learn. It’s very adaptable. People, depending on tradition, manage to find a way.”

Louisiana’s zydeco, the Central European polka, the Afro-Brazilian forró and South Texas’ own conjunto—musicians around the world have adapted their styles to receive the accordion. “It’s made its way around the world and infiltrated traditions without really radically changing them,” says Ragland.

“It also allows for people without a lot of money to have a really loud voice.”

Founded by Austin folklorist Pat Jasper in 2001, the International Accordion Festival is a dedicated showcase of Earth’s squeezebox styles. In recent years, the IAF has been doubling down on their mission to present the accordion as a gateway to folk cultures worldwide.

“The original idea was to use the accordion as a way not only to celebrate a lot of different ethnic musical traditions but to take that instrument and explore it cross-culturally and introduce local audiences to other genres,” says Ragland. “In recent years, we’ve been focusing more on these cross-cultural fusions. Because that seems to be the way things are going. Younger people are growing up in these communities where they have access and exposure to a lot of different musical traditions. Sometimes they’re sampling others or they’re doing a more contemporary pop take on it.”

Popular uses of the accordion surely exist—for confirmation visit the work of the E. Street Band, Tom Waits or Arcade Fire. But for the most part, the accordion has found its home in the folk cultures of America and beyond. Because of these regional hotspots and a blue-collar tendency, Ragland says accordion cultures have a tendency to be overlooked.

“It’s the instrument of the working class,” says Ragland. “Look at the association with Tex-Mex music. It’s highly symbolic in that respect. A lot of people studying music over the years have looked down on it and can’t understand why we would want to deal with this instrument. We’ve had letters from scholars asking, ‘What are you doing?’”

No, the accordion is not traditionally sexy or sleek, but that’s what helps make it an extraordinary instrument. Without the trappings of cool, accordionists are able to infuse the air-driven instrument in settings thought unimaginable. And music-lovers are able to use the accordion as a Rosetta Stone to study and soak up alien cultures.