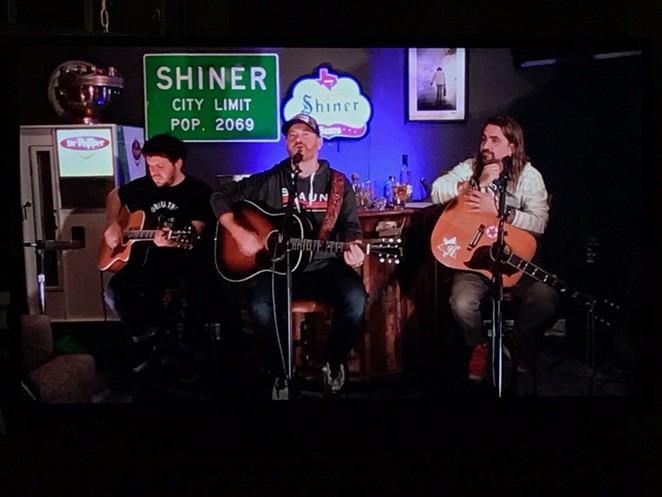 Wade Bowen/ Facebook
The Americana music scene is deeply embedded in the Texas Hill Country. Some of the folk-inspired genre's best-known performers not only write and gig in the Austin and San Antonio areas, they also live and raise families here.

To that end, Bowen converted his garage into a honky-tonk mancave to host live shows on Wade's World Quaranstream. On Friday nights, Bowen sits a fair distance from another Americana artist, and the two take turns singing their own songs. They also take breaks to answer viewers questions or pause for "virtual shots" with those streaming on Facebook Live.

Bowen has featured guests including Stoney LaRue, Sean McConnell, Jack Ingram and Cody Canada. The live stream kicks off at 8 p.m. every Friday, and it's not unusual for the acoustic song swap to last until nearly midnight.

Wade's World Quaranstream averages about 3,000 streamers each live show, with Bowen dropping his phone number on social media for viewers to message song requests and questions for the artists to answer.

This Friday, Bowen hosts Austin resident and Roots Rock songwriter William Clark Green. It may not be quite the same as seeing the show unfold in a bar room with a cold one in hand, but it's pretty damn close.