Nunn is performing as part of the Chaparral Music & Heritage Festival, a Fiesta event. 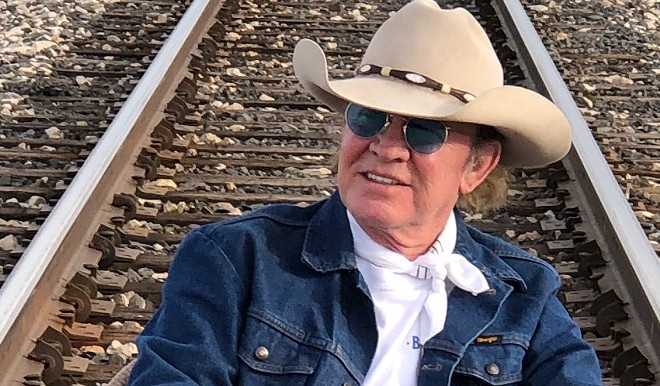 Twitter / Gary P. Nunn
Gary P. Nunn will perform Saturday, April 2 in San Antonio as part of the Chaparral Music & Heritage Festival, a Fiesta event.
Gary P.  Nunn may not be the highest-profile musician in Austin's 1970s progressive country movement, but he's among the most revered.

Nunn — who performs in San Antonio this Saturday as part of the Chaparral Music & Heritage Festival — was an original member of the Lost Gonzo Band, a '70s ensemble that backed up icons including Jerry Jeff Walker, Ray Wylie Hubbard and Michael Martin Murphey.

Beyond that, Nunn penned “London Homesick Blues," a Texas jukebox favorite whose “I wanna go home with the Armadillo” has launched countless barroom singalongs. Recorded in 1973, it remains a Lone Star State standard and has served as the longtime theme song for PBS's Austin City Limits.

After launching a career as a singer-songwriter in the early '80s, Nunn blazed a DIY trail long before the so-called "indie revolution." He continues to release acclaimed albums on his own label, runs his own song publishing companies and manages his own career with the assistance of his wife Ruth.

We caught up with Nunn ahead of the show to ask about his pioneering path in Texas country, his DIY spirit and an effort he spearheaded to keep local venues open during the pandemic.

You spearheaded the Texas Masquerade Party,  a nonpartisan advocacy group that encouraged mask wearing and social distancing as a way to help Texans get ahead of the pandemic and ensure music venues stayed open, especially the state's classic dance halls. Why was that important to you?

Well, it's such a part of our heritage and our culture. Of course, most of these are German and Czech halls. And the original settlers, they built these buildings as community centers and places to have dances and the family reunions. They're just a part of our Texas culture. And it'd just be a shame if some of them just weren't able to stay open and continue, because there's a lot of effort going into preserving and restoring these buildings currently. So we're just pleased that most of them survived — all that I know about. I haven't heard of any of them being closed down, so we're thankful for that. But it's historical value, and they remind us of our past and the history of the way Texas developed over the years. And it's great that these communities keep these old venues alive and retain those traditions.

Do you see similarities between those halls and your own music? In a way, the stuff you do is very rooted in tradition. Yet at the same time, it continues to evolve and finds new ways to reinvent those traditions.

I do. I have made an effort to include in my show some traditional songs and some classic country and western swing, and then I also try to be relevant to the times that we're living in and the newer, younger audiences that are Texas music fans these days.

Anytime you look at a Gary P. Nunn biography, it always prominently mentions that you wrote “London Homesick Blues.” I'm sure everyone would love to write a song that becomes so iconic. But do you ever wish people would say, "And by the way, he also wrote great songs like 'The Last Thing I Needed First Thing This Morning' and 'Macho Man From Taco Land'?"

Yes, I do. I do. You're exactly right. But, on one hand, I'm so grateful and thankful that that song has remained and stood the test of time. And it is a difficult, because people, when they come to see you, they want to hear what they know and what they're familiar with. And a lot of times, if they hadn't kept up with the recent recordings that I've done, and I try to bring on some new stuff, they go, "Well, what about this? And what about that?" They'll go way back to the early '80s when I first started. "So why don't you ever play that song?" I don't know. It's a balance there. You want to do the ones that they know and love and make sure that they hear those, and also be able to bring forth some new ones.

Did you have any idea, when you were writing "London Homesick Blues," that you'd written something special, something that people would still be listening to decades later?

Actually, I didn't. I just wrote that song to kill time and to kind of document the situation that I was in at the time. But no, I didn't really think much of it, because it's kind of far removed from classic country. And I had no idea that it would get the response that it did.

Over the years, you've worked with folks like Michael Martin Murphey and Jerry Jeff Walker. You've written songs that Willie Nelson and other music legends have recorded. As you look back, have there been any big performers you never worked with but would like to have?

Well, I hear some of my songs and I say, "I wish Ray Charles would've done that." Of course, Willie did “Last Thing I Needed,” and I think Ray could have done a great job with that too. But Ray was always my hero, because I was kind of a closet piano player coming along. And I kind of gravitated toward the piano players, like Leon Russell, Ray Charles and some of those guys. Elton John. But gosh, I don't know. There are so many that you'd just be thrilled and honored that they'd take notice. Chris Stapleton picked up the “Last Thing I Needed” in the last couple years and has done very well with it yet. No. 2 when he released it as a single. So, I'm getting another run with it from Chris.

I read an interview from a couple years back where you said you wished that you’d viewed music as a profession earlier on rather than a hobby. At what point did you finally shift gears and realize this could be a livelihood for you?

Well, it was immediately after the Lost Gonzo Band. And, by the way, we had three concerts in the recent past where we reunited the Lost Gonzo Band and played songs from that. And gosh, the response has just been awesome. ... We sold out the Gruene Hall. We had 900 people there. We just played the Luck Family Reunion, Willie Nelson’s thing out there. And then we did a fundraiser at the Paramount Theater and sold it out just a couple of weeks ago.

But, anyway, the band joined up with Jerry Jeff [Walker] in 1973, which is when we cut that ¡Viva Terlingua! record. They had already moved over and joined Michael [Martin Murphy]. But after they had me cut that song, it got such a great response that the manager asked me — because I was still with Michael — "You need to come over and join this band, because we're going to put this song on the record. So you need to be there to sing it." But we played that, and we were going wild and flying all over the country with Jerry Jeff. And it just got too weird and too wild. Jerry Jeff was just always walking on the edge of flirting with danger and pushing the envelope to the very end. And so, it got to a point where you started to kind of worry about your own personal safety and security.

And so, at the end of 1976, we quit the band. And then we spent about three years there making records with the Lost Gonzo Band. We just didn't have the record company support that we needed. It seemed like they were only interested in us, if we were with Jerry Jeff. But at one point, and at the beginning of 1977, we moved off there. And that lasted about three years until about summer of 1979. Lost Gonzo Band, we were all kind of moving musically in different directions and in our own personal lives. And the musical goals that we had were headed in different directions, you know?

And that was the start of your solo career, right?

So me, I wanted to stick with the kind of the Texas progressives thing because that's what proved to be successful. But it was at that point where I didn't have a gig and could just say, "What in the world am I going to do?" That was when I decided, "Well, you better get busy and try to do something on your own, rather than look for someone to back up, like I always have." But I said, "You're right. You better get busy." So, I got involved in the music publishing business. I started making my own records. I was probably the first one in Austin to make an independently produced record.

Clearly, lots of people these days are taking that route. Even some folks, who had spent time at major labels or whatever have opted to put stuff out to themselves. Any advice for younger musicians looking to chart an independent path?

Well, one thing, you got to have more than one job. Though, in my case, I chose jobs that were involved in the music, like the publishing aspect of it — making sure that writers hold onto their publishing rights. If you can afford to produce your own records and have total control, do that, because I've managed to have total control of all the properties that I've ever done. Everything I've written, everything I've published and everything I've recorded, there's no one else that has a piece of it. So, in the long run, it's a slow route, but it's a route that, in the end game, I think it is more beneficial, because when you go off and sign record deals, sign publishing deals, sign agent deals — everything — by the time it gets down to you, there's not much of a percentage left.