The Liberation of CSS 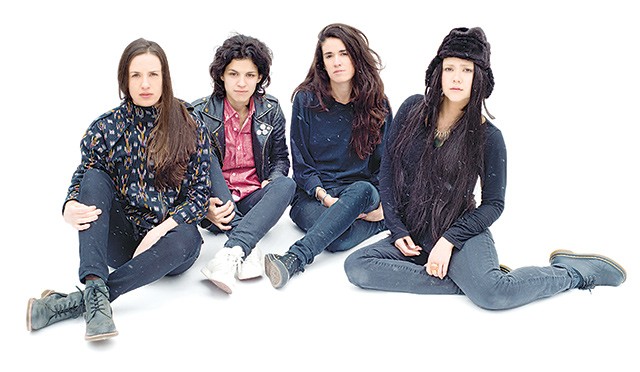 When CSS (“Cansei de Ser Sexy,” Portuguese for “tired of being sexy,” supposedly something Beyoncé once told the press) set out to record Planta, their fourth album, the electro-pop band was at a crossroads.

“Yes, it was a challenge [to record it] and there were pressures, but mainly internal pressures,” guitarist/bassist and keyboardist Luiza Sá told the Current from New York. “The pressure of doing something new and refreshing, something that would satisfy us.”

But after the success of Cansei de Ser Sexy (2005), Donkey (2008) and, to lesser acclaim, La Liberación (2011), producer, guitarist and main songwriter Adriano Cintra split with the band in 2011 and later described CSS as “musically incompetent.” For Sá, the incident was “minor” and “not worth the time,” but she didn’t dodge the question either—she’s in good spirits, laughing playfully during her responses.

“I really don’t know everything that he said,” Sá explained. “I mean, he said a lot (laughs).”

He said a lot, indeed. For starters, in November 2011, Cintra (who couldn’t be reached for comment) released a statement announcing not only that he was no longer part of the group, but that he didn’t give the band permission “to use my songs in their next concerts, since we haven’t come to an agreement about it.” According to him, the last straw was not getting paid for the latter part of the 2011 European tour, when he developed a strain injury in his hand and couldn’t play for many of the shows.

The band is now singer Lovefoxxx, Sá (who took over as guitarist but also plays bass an keyboards), Ana Rezende (keyboard, guitar) and Carolina Parra (guitar, bass, keybpard), and until now I’d never asked them about Cintra’s comments.

“I wasn’t surprised about his reaction, because I’ve known [Cintra] since I was 15 and this isn’t the first time he has problems with people [he worked with],” she said. “But I was hurt, because I still care about him as a person. That’s just the way he deals with things.”

For Sá, Cintra’s attempt to limit what the band could play in concert was absurd and inaccurate—it wasn’t “his songs” he was fighting about.

“Anyone can play anyone’s music, It’s not illegal,” she said. “You can start a band tomorrow and just play covers. There’s no way he can stop you from that. He was making this very complicated, very specific argument that we were using backing tracks, specific sounds. We just went on and remade all those sounds differently. He was referring to additional sounds that we use with the band live, sounds that would be hard to produce live. In concert, it really won’t make a difference for the audience.”

Once they took care of the tracks issue, it was time to record Planta. The band recruited TV on the Radio’s Dave Sitek (Beady Eye), and the response was mixed at best. For starters, the Current’s own J.D. Swerzenski hated it.

“For the most part, the record plays like a jumbled pile of synth lines and drum loops thrown haphazardly into a ProTools session, with a Lovefoxxx vocal pasted at random on top,” Swerzenski wrote in June, before adding the album is “not outwardly grating or annoying, but then again creating the equivalent of electro-wallpaper shouldn’t count for much.”

While Pitchfork called it a “one-trick sameness” and Rolling Stone gave it only two stars, others were more enthusiastic. TheQuietus.com called it the best Sitek-produced album this year and Time magazine described it as “catchy, smart electro-pop that manages to stay true to their indie dance roots, while exploring new ground.” Most online comments suggest their legions of fans are happy with the record, while it failed to impress their less avid followers.

“It’s funny, because some critics love the record and said, ‘Great, Adriano left and it sounds better,’ and others would go, ‘Oh, Adriano left and now it sounds terrible!’” laughed Sá. “But there are so many more facts to liking a record or not. The producer is an important fact, but it’s not all the facts. Of course [Planta] was a big change. Adriano was the producer and the main writer, so [recording it] was challenging but also refreshing and fun.”

The one thing everyone agrees on is that, in a live setting, CSS hasn’t lost any of its charm—if Brazilians know anything, it’s how to throw a party. Believe it or not, if it’s in Texas, all the better.

“Texas is a polarizing subject,” Sá said. “Some people have the idea that, besides Austin, [Texas is] very square. But every time we go, [it] is really a lot of fun and I don’t feel bad at all in Texas, ever.”

In a story for Modern Drummer in August, touring drummer J.R. Kurtz (whom Sá calls a “permanent member”) sheds light on the new CSS live show.

“I wouldn’t go as far as to say [CSS’] music is simple—just more straightforward,” Kurtz said in the interview. “You have to learn to keep your cool and play what fits the songs. Some tracks can allow me to let loose a little, but maintaining the feel for the song is key. Playing with them has not only made my internal metronome more precise, but it’s required me to become more savvy with Ableton Live, a program used for triggering samples and click tracks live. You have to be spot-on with Ableton, like triggering a sample on the offbeat right after a snare hit.”

A CSS show is fun and unpredictable, and I’m intrigued to see how this new, liberated incarnation of the band answers the question that many have been asking lately: does CSS still have it? Did they ever really have it? Sá couldn’t care less.

“We just want to make music, something that we like,” Sá said. “Being technically amazing never was something we ever worried about. That’s not the kind of band we are.”