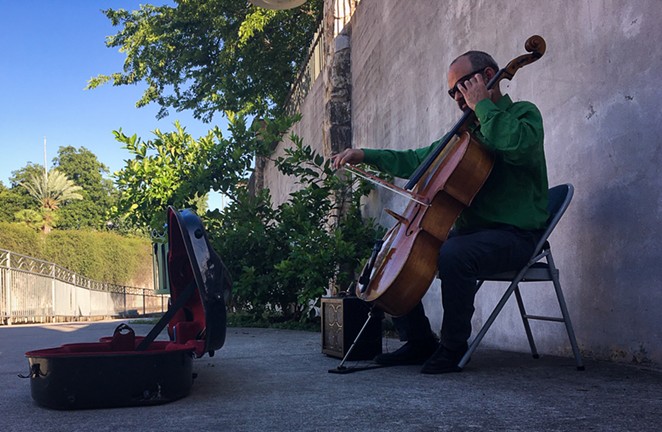 Katie Hennessey
Let’s face it, San Antonio is no New Orleans when it comes to street music.

The City didn’t open a pathway for performers to legally play in public outdoor spaces until 2016. But, now that it’s here, musical performers have become fixtures at numerous downtown sites. What would the Pearl district be without its barefoot didgeridoo musician or the Torch of Friendship without its bagpipe player?

In recent months, busking has been all the more essential. When music venues closed in March to limit the spread of COVID-19, life for musicians was uprooted. With no gigs, stages or audiences available to contribute to their livelihoods and creative outlets, some turned to the streets.

San Antonio musicians performing in public places told the Current that busking during the coronavirus crisis is one of the few remaining ways to reach audiences, keep their skills sharp and share fresh ideas.

‘Solitary Life is for the Birds’

San Antonio native John Stuart is not new to the Alamo City’s busking scene. He recalls sitting outside the Majestic Theatre with his 60-year-old German cello playing “Memories” as audiences left the musical Cats.

That was before COVID-19, back when it was safe to congregate together in theaters. Stuart, a former cellist for the Hamburg Mozart Orchestra, said he misses the social aspect of music.

“You build all these social interactions in the music business,” Stuart told the Current. “And when that’s taken away, it’s almost like your connection to people is gone.”

The instrumentalist set up in the King William District in early June with his back to a naturally amplifying wall near the San Antonio River.

In-between Bach compositions, Stuart greeted trail passersby — cyclists, dog walkers, couples out for an evening stroll. After a performance of Bouree Third Cello Suite, he confessed to a small crowd that the quarantine blues had gotten the best of him.

“Solitary life is for the birds,” the cellist said.

After the show, Stuart said he could have emulated other musicians and turned to live-streaming for a social connection. But it just doesn’t compare to the real thing.

“Online is a one-way conversation,” he added. “Out here, I look into someone’s eyes and they can actually be like conductors for me. If they look bored, I might play a little more frantic. If they are more serious, I might slow the tempo down. There is an immediate sort of dialogue out here."

Members from Latino-funk band, Mírame, added a musical experience to a June Saturday evening at Travis Park. The downtown green space, though sparsely congregated, had a different feel from the abandoned green spaces many people encountered weeks earlier.

Enrique Zurita rattled on the drums, while Louis Fermin blended ethereal notes on the keyboard. The duo’s instrumental jam session invited park-goers into the experience. One passerby joining in to add vocals while others danced along.

Mírame was invited to play at Austin's massive SXSW festival for the first time this year, Zurita told the Current after the park show.

“We were making preparations for SXSW, but when that got cancelled, we’ve just been trying to stay focused on music,” Fermin added.

The band members have kept their musical focus by writing songs and playing wherever they can, according to Fermin. Even if it means busking in city parks.

“We’re just trying to get ready for when things pick back up,” the keyboardist said.

Paper Tiger contacted the band at the beginning of June, when concert venues appeared to be reviving at limited capacity. But the brisk rise in COVID-19 cases led to a ban on outdoor gatherings of over 100 people and slammed the brakes on that performance.

Hip-hop trio, Defylo stopped in at Pearl’s riverside park for a nighttime show in mid-June. The freestyling team brought on-the-spot rhymes, catchy harmonies and an upbeat percussion to their set. Their main reason for showing up was to deliver a message.

Defylo’s performance came amid a heavy backdrop. Even as the city reeled from the COVID-19 crisis, many here spent weeks taking to the streets to advocate for racial justice and police reforms.

“Hold on, be strong, be still, be calm,” the trio harmonized. “The sun shines after the storm, it’s darkest before the dawn.”

With the absence of music venues to reach audiences with fresh ideas, the impromptu availability of an outdoor performance venue gave Defylo an outlet for their positive message.

Whether buskers are trying to find connection, practice or a seek a place to spread ideas, the streets have become a stage amid the pandemic. But according to the River City’s street performance policies, a few exceptions apply.

Downtown public pedestrian spaces, including city parks, are fair game for musicians, but San Antonio does not allow busking on the River Walk, Alamo Plaza or Main Plaza.

Houston Street and Travis Park are preferred street performance areas. No registration is required to busk in San Antonio.