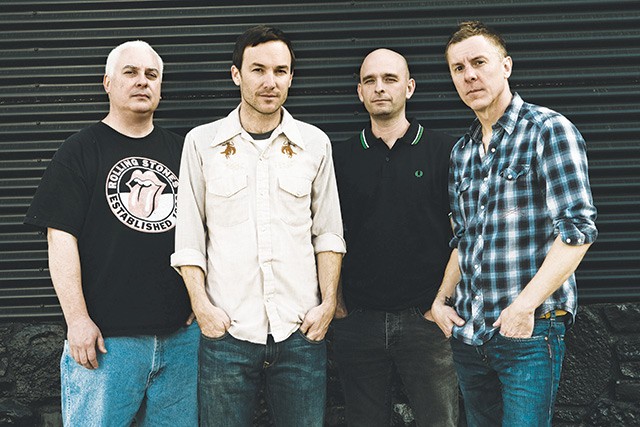 Courtesy photo
The Toadies (Vaden Todd Lewis, right) will attempt to slake their rabid fans’ thirst for 1994 by playing that year’s Rubberneck straight through

In 1993, after being noticed by Interscope Records on the strength of their debut EP Pleather, Texas post-grunge rock band the Toadies began recording their debut full- length. The album, named Rubberneck for its pervasive sense of disaster watching, would prove to be one of the most enduring and definitive rock albums of the 1990s. For every bit of adulation heaped upon the platinum-selling Rubberneck by fans and critics alike, there has been just as much ire and confusion surrounding some of the album’s dark and seemingly nefarious lyrical content.

26 Photos of the Toadies’ Show at Josabi’s

From the anxiously pounding, instrumental opener “Mexican Hairless,” to the calm, acquiescent rage of acoustic closer “I Burn,” Rubberneck is an album wherein ageless struggles—between control and abandon, good and evil, love and hate—rage on. The album deals with baptism (“Backslider”), love as salvation (“Mister Love”), a personal heaven (“Away”), the sour end of a relationship (“Quitter”), evolution (“I Come from the Water”) and, possibly, home invasion and sexual assault (“Tyler”).

Themes of sin and redemption abound, along with a delirious tension between how we should be and how we actually are. As such, Rubberneck’s success and staying power act as touchstones for our culture’s perennial obsession with our own propensities toward the dark side. For more information on the Toadies’ songwriting inspiration, something of a coyly guarded secret, head on over to thetoadies.com and check out guitarist Clark Vogeler’s insightful mini-documentary Dark Secrets: The Stories of Rubberneck.

As the band tours extensively in celebration of their landmark album’s 20th anniversary, the Current caught up with the Toadies’ main creative force, singer-songwriter Vaden Todd Lewis, over the phone recently to discuss Rubberneck in retrospect. Dig the highlights of that chat below and don’t miss the band performing Rubberneck in full at Josabi’s.

Out of all the forgettable albums released through the years, how does it feel to have created, in Rubberneck, such an enduring work?

It’s killer. It’s surprising that people gave a damn to begin with, and certainly that they still do. Who knows what makes something popular in the music industry. I definitely think the timing had a lot to do with it.

To go along with all the good, what difficulties have you faced in relation to Rubberneck?

Well, mostly, it just opened up a lot of doors, like radio has been great to us. But as we continue to make music, it’s sometimes tough to get them to play a little of the new stuff. And that’s frustrating.

Where did Rubberneck’s prevalent themes of sin and redemption come from?

I was brought up Southern Baptist, so those things are just a part of my vocabulary. I was just learning to write songs and these were the words that came out.

How about some of the darker things on the album? Like, say, home invasion, sexual assault, intimations of violence in general—where did those things come from?

All that specific dark stuff is implied, of course. [The lyrics] are culled just from things I’d heard from friends, family, the papers—I was also reading a lot of pulp horror fiction and true crime stuff at the time, so that probably worked its way in. I went for years without explaining these songs because when people came up to me they had invented their own stories and it was like, ‘Damn that would have been a good idea if I’d thought that.’ Really, I like to write lyrics in a kind of veiled way, so people can come up with their own attendant stories.

Well, you know, people read all manner of wild shit into those songs. Do people’s interpretations of Rubberneck ever bug you?

No, it’s just kick-ass that people think about it that much.

What can we expect for the Rubberneck 20th anniversary show?

My plan was to go out and play the entirety of Rubberneck and then leave the stage. Then we’d look out and see if there was anyone left. But no one was leaving! So now, the plan is to play Rubberneck all the way through, with no interruptions, then I’ll say a few words and we’ll launch in to the new stuff. It’s been great to have fans responding to the new stuff as well.

See you at Josabi’s folks. And don’t forget to also be on the lookout for Rubberneck Red, the new Rubberneck commemorative beer brought to you by Fort Worth’s Martin House Brewing Company.